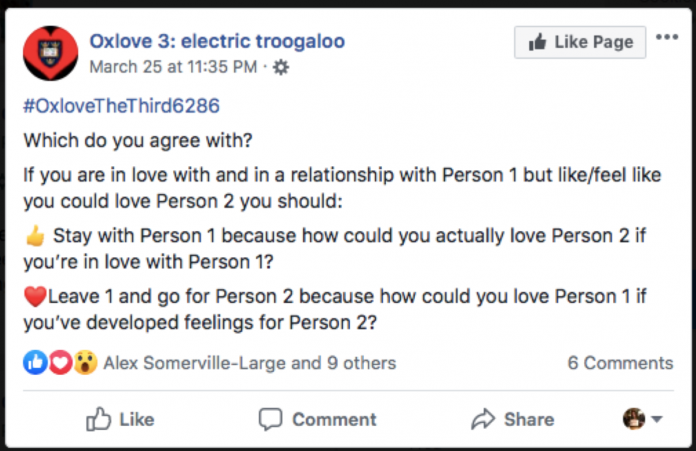 Between digging the bunker in the back garden and foraging for loo roll, I’ve mostly been scrolling through Oxlove recently, becoming increasingly invested in the plights of Oxford romantics. Encouraged by the prospect of months in ‘isolation’ students are taking to the internet, “sliding into DMs” or releasing the family carrier pigeon to tell people how they really feel about them. Aside from being a startlingly British response to a global pandemic (“You mean I won’t have to see them for six months? Ample time to recover from any awkwardness? Fabulous, I can send that text then!”) I think it’s the smallest of silver linings in this difficult time, and should be nurtured rather than dismissed.

When it comes to sending a potentially rash message, I’ll be the first to admit that I can be a little too trigger happy. A few of you may even be reading this and reminiscing on an overly-forward, potentially awkward, ‘you-weren’t-meant-to-actually-acknowledge-that-in-writing’ message you’ve received from me. If so, I would say I’m sorry but the likelihood is I’m almost certainly not. Maybe this is because I don’t like rollercoasters, but nothing else gives me the same rush of adrenaline that I get after pressing send. Nothing beats the dizzying high of hindsight when you realise the message you’ve sent, currently rattling down the airwaves, is akin to the start of your own personal disaster film. (You know, the scene where the beach goes quiet and the tide retreats, or the one with the distant, ominous rumble before the ground starts to fall away.) Perhaps I just like the drama, but I think there’s a little more to it than that. I should stress that these messages are never malevolent. They normally take the form of reckless admissions of attraction or nosy questions about unclassified situations – the messages we all want to send, but that most of us rarely do.

I’ve never been very good at following the unwritten rules of online conduct and more often than not they really irritate me. The idea that when people are ‘active’ they could be doing anything from brushing their teeth with facebook open, to chatting to other people and choosing not to prioritise you, particularly bugs me. The fact that someone can ignore your message without actually ignoring it, but you can pretty much assume that they are, though you have no right to call them out on it without coming across as petty and ridiculous, is insane. It’s the perfect crime; elegant, stylish and completely infuriating in the way it renders you utterly helpless, bound by social media etiquette. Consider too, the concept of leaving someone ‘on read’. In a modern digital age this is a devastating insult and as a result conversations often drag on painfully until one party manages to gracefully extricate themselves. Or worse, it’s used as power play – a way to assert your dominance and claim the greater degree of ambivalence in an uncertain relationship. The idea of ‘messaging first’ can be anything from a white flag, to a sign of interest and the ironic use of emojis continues to baffle me. Not to mention the fact messages are often carefully edited to be as short as they can be, ‘brief and breezy’ rather than heartfelt and sincere. At this minute more than ever I’d rather receive a long, rambling message that strikes a genuine tone, than continue this weird digital dance.

Thankfully now, with the world turned slightly upside down, people are turning their backs on this performative interaction for something far more real. They’re defiantly messaging first and frequently, writing bravely and honestly. Yes, you should tell that person you’ve always secretly thought that they were the bee’s knees! Or query that one time that person did that thing, that could have been flirting, or could have just been the result of one too many glasses of wine – find out what it meant. Ask the questions you want to ask and say the things you want to say. It can be incredibly cathartic. It can be (in times as dull as these) an absolute thrill, bonus points if it’s someone you’ve never messaged before. There’s no relief, no matter the consequences, like finally being able to blurt out how beautiful you think someone is, or eventually asking that burning question. This is the way we should be! We’re a sociable species and whilst rejection (or 18 hours with a message left unopened though the recipient is persistently, irritatingly active) is never particularly pleasant, there’s never been a better time for it than now.

There is no lovelier thing than a random message from someone near or far, with a message of love or a subtext that smacks of bravery. Life isn’t that long, love and meaningful friendship is more than worth the risk and in adhering to the current unwritten rules we’re denying ourselves happiness. It can be scary to be vulnerable, even with our closest friends, but why not send them a message of appreciation at a time when it’s easy to feel lonely or overthink the relationships founded or furthered at Oxford.  We have so much love to give and we shouldn’t restrict it to carefully timed heart emojis or the odd drunken reveal. (I’m still waiting for my future husband to read my articles, fall madly in love with me through only my words and reach out to me – just saying.) But that said, nothing made me beam more than a friend messaging me this week out of the blue, just to say she was thinking of me. In a time of isolation we have to fight to stay connected and we should all learn from the brave people of Oxlove who are casting off the shackles of socially acceptable messaging in the pursuit of a connection. They may be shrouded in anonymity, but they are still managing to be more open and honest than the rest of us put together. Let’s change that. Let’s make a generation of brave, open people the legacy of this surreal time.