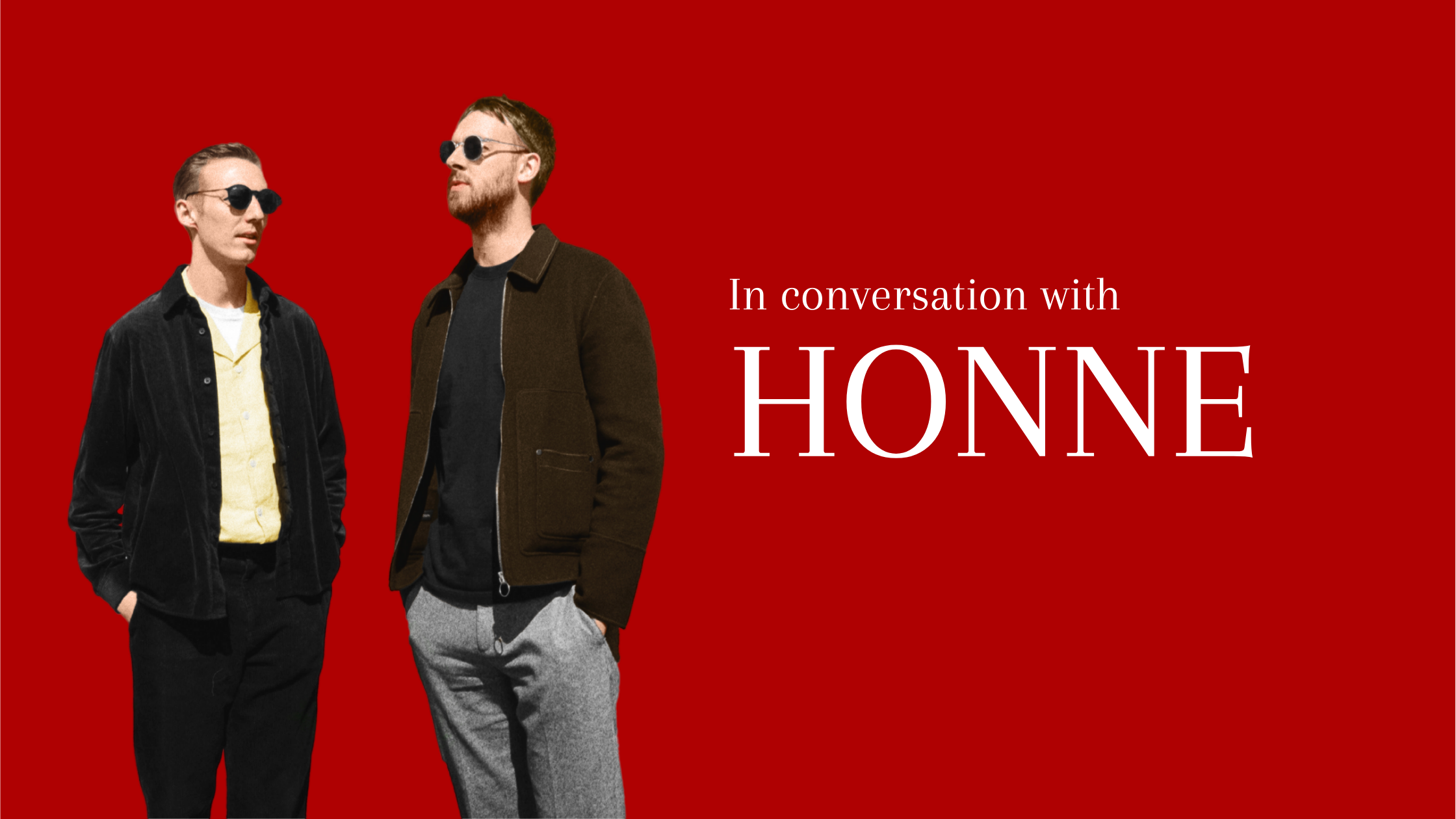 When I met HONNE over Zoom, they’d been up late the night before working on a new music video for an acoustic version of free love, one of the singles from their most recent mixtape, no song without you. For the week leading up to our call, they’d been working primarily on video shoots, mostly because of lockdown; up until now, filming in person was relatively impossible, so the duo seem to be making the most of the slight relax in measures, leading to quite a few yawns interspersed throughout the interview.

From the release of their debut single Warm on a Cold Night in 2014, musical duo HONNE have seen steady success. Still, it took a while for them to get there. Both of the boys described growing up with musical aspirations; “I [was] kind of unhealthily obsessed with starting bands in school, even though I was crap.” Although their music concerns romantic relationships, James and Andy’s story has its own air of romance; they describe living almost parallel lives up until the end of their teenage years, and both lived in the South West. “It was funny that we were so close but hadn’t met, but were basically growing up doing the same thing, playing guitar, being in bands.”

Within a week of meeting during Freshers they were working on music together; “I think me and James had always felt that we’re on a very similar wavelength and understood each other, and had a similar passion towards music.” Rather than the traditional Freshers party experience, they recounted booking rehearsal rooms together, “It was probably more, rather than going out and getting drunk, more, should we go and book a rehearsal room?” Given that they both attended a specialist music university, maybe this was the norm.

For a while they were “doing various bits and bobs, but nothing really went anywhere.” Eventually, in 2014, after almost 6 years of working together, they became HONNE. The name is Japanese (pronounced hoh-ne in Japan but straight ho-nne by them), and comes from a word that can be roughly translated as ‘true feelings,’ shared only with your closest companions. Anyone that’s listened to HONNE’s music can sense the immediate relevance of this, given the vulnerability that underpins everything that they produce; “We wanted to show that our music is truthful, and it’s kind of us wearing our hearts on our sleeves.”

Even though they’d been writing music for so long, the name was the last thing to fall into place. Throughout the years, they’d focused almost entirely on writing rather than having any kind of public persona. “We wanted to focus less on releasing music and marketing ourselves and all that stuff. […] I think it’s the pulse of a lot of young bands, you end up focusing less on music and more on trying to get successful, which is a bizarre problem, but it’s definitely something that I think everyone has.” They had come up with a different name before, but switched to HONNE after James came across the word; “the meaning fit perfectly with all of the songs we’d already written.”

Although the word is Japanese, they noted its relevance to British culture, and the chronic reluctance to share one’s feelings ingrained in many of us. “I think it’s something we have in England as well, where people aren’t necessarily completely open about how they feel, and hide behind a facade.” The flip side of HONNE is ‘tatamae,’ that which is shared publicly; HONNE’s label, an offshoot of Atlantic records, takes its name from this. “We felt like our music was our honne, so our true feelings, and then tatamae recordings was our public outlet – so maybe not quite the same as the Japanese meaning, but it’s own our little take of it.”

In July, HONNE released no song without you, their first mixtape; all of their previous releases have taken the form of either EPs or full albums, and this release is perhaps the least heavily produced in terms of sound. The duo saw this as an opportunity to return to their roots. “We grew up playing guitars, so that was both of our first instruments. […] Apart from a few crazy guitar solos, we’ve never really used guitars much in our music;” on this record, guitar features heavily on almost every track. The Beatles and psychedelia were both cited as central influences for the mixtape, and its production process began on a writing trip in LA, where they wrote no song without you, the mixtape’s titular single. Then, coronavirus happened, and with half of the mixtape still unfinished, the duo began to work remotely.

“Some of the songs like la la la that’s how it goes were written just completely in lockdown. Andy sent over a song that was pretty much just guitar and vocals fully recorded and a stripped back, kind of beat. And then I kind of just produced on top. So it was kind of back doing it how we’d done it in the olden days, where we would not be in the same room together and would just kind of work on our own bit separately. So it’s still fun, but a very different experience to how we’d been, because we’d just got a studio together just before lockdown. And this whole year we’d decided to write together a lot more.”

Still, the experience wasn’t completely new to them; “James and I, we both play a lot of instruments ourselves anyway. […] As James says, we can work separately. It’s not like one of us can only do one thing and, you know, has to rely on the other person to make it work. So we’re quite lucky in that we can be quite self-contained, and just crack on and do things separately as well.”

Despite the adverse circumstances of production, the mixtape remains upbeat in sound. HONNE’s work often blends mournful breakup songs with hopeful melodies, and that is a trend that has carried through to no song without you. “Our music historically has a positive note running through it, and whether lockdown and covid had happened or not, I think this album would still have felt like a positive album. […] It felt more poignant in a way, with everything that’s going on, to have some positive music coming out, and to listen to something that was nice.”

One major change as a result of the pandemic has been that the album doesn’t contain any contributing vocal artists, which is unusual for the duo, who have collaborated with the likes of Aminé and Tom Misch in the past. Since lockdown has started to ease, however, they’ve begun to produce with other artists again. On the 2nd of October they released a new single, 1,000,000 X Better with upcoming artist Griff, and are currently working on music with singer-songwriter Maisie Peters.

HONNE described these musical collaborations as an essential part of their process. “You can end up writing something that you never would’ve done because it gives you a different perspective. And […] if you’re writing like a love song, then it gives you the opportunity to put a different perspective within the song.” Duets of this kind can be found across their work, in songs such as Location Unknown and Someone that Loves You, which both tell separate sides of a love story through multiple vocals.

I was curious to hear about the duo’s dream collaborations, and was surprised when they cited mostly classical and instrument-based artists, although perhaps I shouldn’t have been given their level of technical ability. When they started out, they saw James Bay as their main inspiration, and they recounted producing what they described as effectively remixes of his sound. “I don’t think we’d probably exist without James Bay, because we’re inspired by his keyboard sounds and production, particularly at the beginning. I think, basically, we took the James Bay keyboard sound and made James Bay pop, right at the very beginning.”

They also cite the music they grew up on as a central inspiration, “Andy has sisters who used to listen to Destiny’s child and all of that stuff. A lot of the 90’s R’n’B, I think, has infiltrated our music without us realising how much influence it had on us.” Now, they’d love to work with Kiefer Shackelford, a jazz pianist, and Ólafur Arnalds, an Icelanic multi-instrumentalist, both of whom I’d admittedly never heard of, but are supposedly well-known in the “geeky, technical side” of music.

Even though they were unable to collaborate with musical artists, HONNE did collaborate with illustrator Holly Warburton, whose colourful animations and drawings go alongside all of the music. The duo have commissioned artists for album artwork in the past, but have never worked with them on this scale. The pair had also commissioned Holly for the music video they’d been working on that week; “She’s just basically been directing the whole thing […], so she’s actually turned into this really amazing person to be so involved.”

While HONNE’s experience of the pandemic has been relatively positive for the band, they highlighted the difficulties that it has presented for less established artists, who rely on money from small gigs to help them fund the production process.  The Music Venue Trust have reported a 27% drop in attendance at their UK venues, and given the ongoing restrictions, it may be a while before gig culture is able to resume.

Still, the duo are hopeful that they will be able to tour before the end of next year, and have already begun the process of working on their next album. Despite the physical restrictions in place, they think that the pandemic has had a somewhat liberating effect on the music industry as a whole. Several artists have released lockdown projects, including perhaps most notably Charli XCX’s How I’m Feeling Now.

“I think it’s [the pandemic] made me realise that people love to hear new music. And I think bands always wait, like sometimes years, just like we need all the right songs. Everything has to be completely perfect. And we can’t have any breathing space on albums anymore.” The duo cite a combination of internal and label pressures to produce hits, and said that the pandemic has allowed them to experiment more without those confines.

Before we ended our call, I wanted to know what HONNE had been listening to through the pandemic, and I wasn’t disappointed. Some of the more well-known names they mentioned included girl in red and Bombay Bicycle Club, and both James and Andy enjoy classic soul, the kind of things “our parents used to put on around the house.”

You can listen to the mixtape no song without you here and their new single 1,000,000 X Better here.