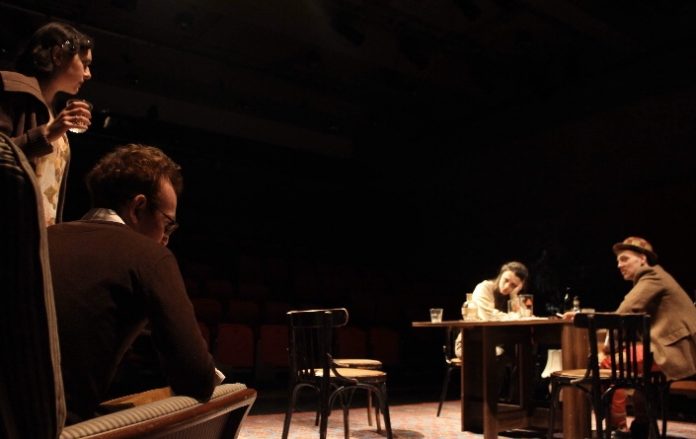 In Osborne’s The Entertainer we find a United Kingdom breaking apart along the lines of generations, cultural ideals, and historical moments. It’s an easy play to associate with our current national climate as much as with its origins in the Suez crisis. But more than anything it comes across as a play ‘of its time’. Looking back towards early twentieth-century Britain with both nostalgia and a need to progress forward is a hard thing to express when the world has moved on so dramatically that music-halls, vaudeville and the like are pretty much forgotten.

Stage Wrong Productions did a beautiful job of recreating the Rice family’s faded, run-down home and its disconnected, disillusioned inhabitants as an image of the distant past that allows its contemporary political relevance to come out naturally. The Entertainer has traditionally been overshadowed by the force of Olivier’s premiere as Archie Rice, but this production at the Keble O’Reilly managed to re-address the balance, forming an ensemble cast. Performances by Olivia Marshall (the disconnected, distressed granddaughter Jean), Celine Barclay (Archie’s wife, struggling against an upper-class world she can never fully be a part of), and Henry Calcutt really stood out. The set is beautiful, and does its job perfectly. Warmly lit, the faded rickety furniture (The Entertainer is surely the perfect play for the TAFF props store), sits on a beautiful red rug covering the stage, that to begin with invites us into cozy, homely warmth. But as Osborne’s (long!) play progresses it quickly grows to be claustrophobic, knackered and past its time.

Fuelled by real beer onstage (the characters spend the play doing almost nothing but drinking) and cigarette smoke, Stage Wrong’s performance draws us into the dysfunctional, haunted world of the Rice family and insightfully pulls apart their fractures. The cast brilliantly create a group of characters that are only ever half-listening to each other, letting each character have their own exposition, letting on at their internal anxieties and traumas, moving between people not-saying and saying.

Arthur Campbell shines as Billy, the disillusioned retired music-hall star, arthritically shuffling around the room with a powerful sense of dwindling charisma. Shifting between bumbling, rambling old age and lucidity that sees into the rest of his family far more clearly than anyone else, Campbell beautifully captures his nostalgic, fading, but still-captivating character. He is matched by Charlie Wade’s performance as Billy’s son, Archie, a 50-something staving off bankruptcy by performing a second-rate copy of the music-hall tradition of his father. Wade had a difficult task when performing large chunks of Archie’s bad stand-up act, but he shines on the music-hall stage, catching a balance between presenting a dull, second-rate act and being so self-consciously bad that it was actually quite funny.

Overall it was an intelligent, delicate production of Osborne’s deeply complex play, focusing more on a country traumatised by war than one trying to find its identity amid the rags of a dying, outdated empire. Osborne’s play often feels uncomfortable; his link between nostalgia for the dying music-hall tradition and the decline and fall of the British Empire is difficult not to bristle at. I sat down in the theatre with deep trepidation, somewhat unconvinced as to how I would feel watching a play that is, in more ways than one, very much ‘of its time’. But Stage Wrong productions seem to have found something new in Osborne’s play, showing us a country that isn’t collapsing as it loses its identity, but breaking down in an attempt to invent, create and newly-form its sense of nationhood.

“Unafraid to poke fun at the elite” – Review: The Corn is Green