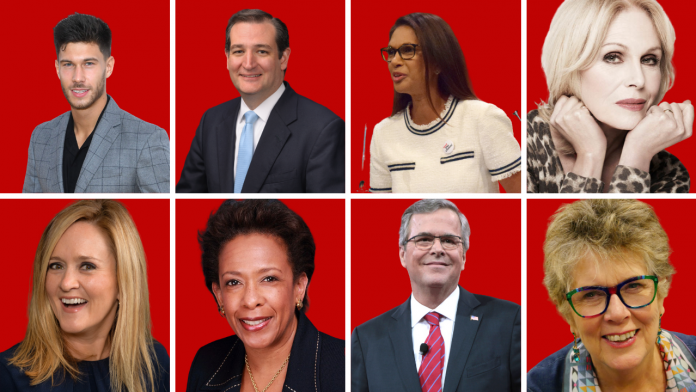 Gina Miller initiated the court case R (Miller) v Secretary of State for Exiting the European Union, which ruled that the Government could not withdraw from the European Government without an act of Parliament. She also successfully overturned the prorogation of Parliament by Boris Johnson in 2019.

Soumya Swaminathan is also due to give an individual talk this term. Soumya is currently the Chief Scientist at the World Health Organisation.

Prue Leith, prominent cooking journalist and host of the Great British Bake off, will also give a talk at the Society.

A number of sports personalities including the Brownlee Brothers, Irish rugby player Brian O’Driscoll, and Daniel Sturridge, are also due to speak.

The Union will also host two presidents this term: Kersti Kaljulaid, the current president of Estonia, and Egils Levits, president of Latvia.

Due to the coronavirus pandemic, the Union has announced that all talks and debates will take place in podcast format in Trinity term. All individual speakers’ talks will be recorded in advance of their release. Debates will be presented in a panel format, with the hosts interviewing speakers one by one, followed by a general discussion. There will be the possibility to submit questions for each event on the Union’s Facebook page.

The lineup is 40.4% female or gender non-binary, and 40.3% of the speakers are BAME. 71.6% of the term card will be international. The proportion of international speakers is higher than would typically be possible due to the online-only format of the talks.

Other prominent speakers include Joseph Stiglitz, Nobel Prize-winning economist and former chief economist at the World Bank. Mr Stiglitz also chaired the Council of Economic Advisers, the body which advises the President of the United States on economic policy, from 1995 to 1997, serving under President Bill Clinton.

The Union will host twenty panel debates, more than twice as many as were hosted last term. The debates include four in a “COVID-19 Special Series,” which will interrogate a range of topics including the economics of the coronavirus and the marginalised voices of the coronavirus.

Another four debates will be hosted as part of their “Weekend Special” series. These will be released on the weekends in addition to the talks which would traditionally occur on Tuesdays and Thursdays. The Weekend Specials will include a “Chef’s Roundtable” and a talk titled “Demystifying Mindfulness”.

Other topics which will be debated during the term will concern the refugee crisis, the future of Hong Kong and the war in Afghanistan.

The podcasts will be released on Spotify and Apple Podcasts.

A full list of the speakers this term can be found below, and a PDF of the term card here.

Katya Adler・Europe editor at the BBC

Prue Leith・Judge of the Great British Bake Off

Mike Schur・Producer and writer of The Office, and co-creator of Parks and Recreation

Ryan McCarthy・United States Under Secretary of the Army

Hong Kong: What Does the Future Hold?

Russia: Do We Live in Putin’s world?

Behind the Bars: How Do We Fix Our prisons?

Afghanistan: Is Peace a Lost Cause?

The Rohingya Crisis: Humanity on Trial?

Latin America in 2020: Another Last Decade?

The Democratic Party: No Place for Moderates?

Love Island: Should We Regret the Summer of Love?

The Future of Work: Imagining the 21st Century Workplace

India: A Failure of its Founding Fathers’ Vision?

The Economics of COVID-19

The Marginalised Voices of the Pandemic

COVID-19: A Gatway to Authoritarianism?