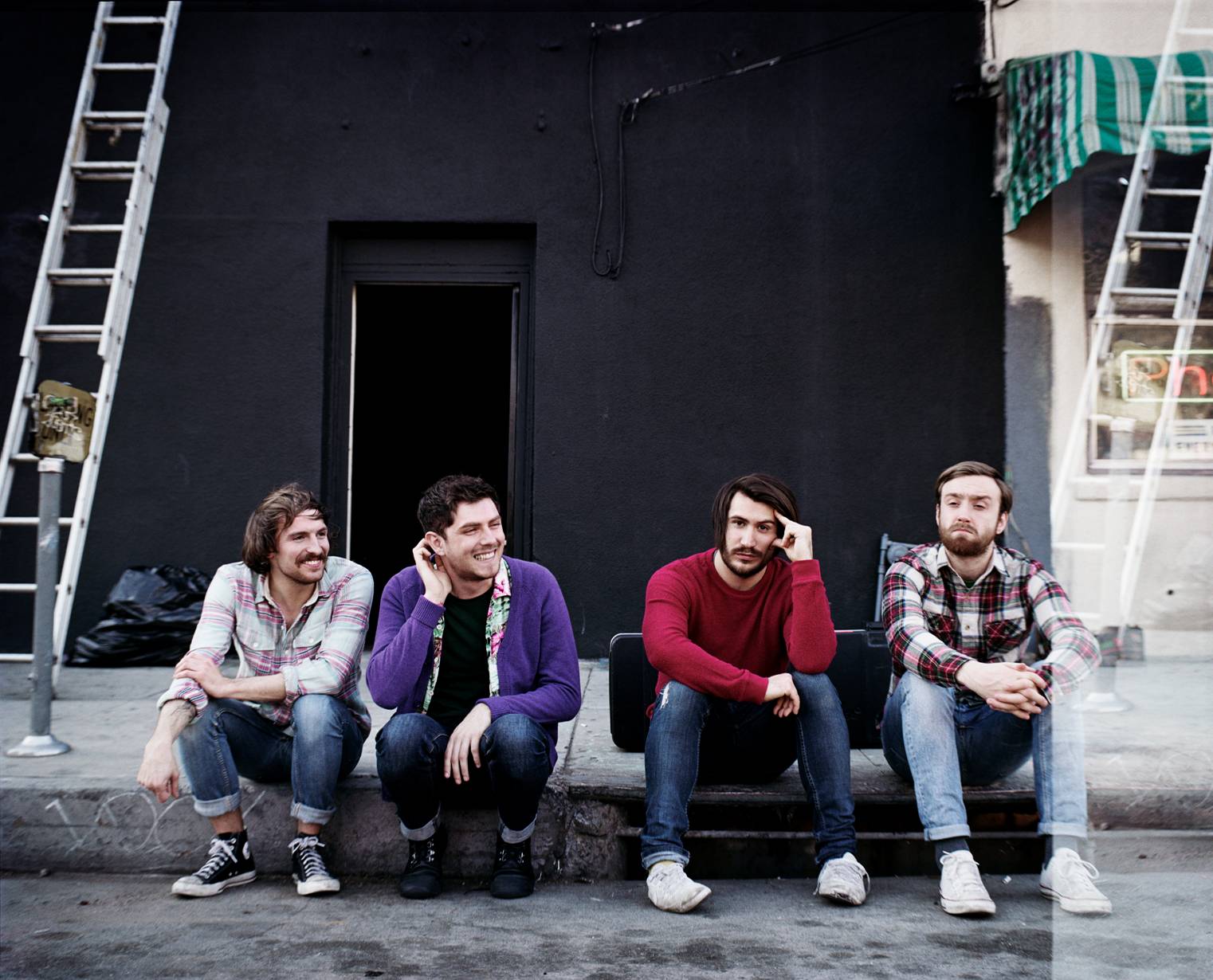 In the heart of the Glaswegian alternative music scene circa 2006, Sam McTrusty, Ross McNae, Craig Kneale and Barry McKenna formed the rock outfit Twin Atlantic. Known for their punchy guitar-driven anthems and penchant for gigging, the four-piece quickly gained traction in the local crowd.

With the release of their debut album Vivarium in 2010, they began to catch the attention of rock fans outside of Glasgow, and soon enough the band earned a well-known and well-respected name on the scene. Their signature combination of Scottish soul and hard-hitting rock saw them put out three subsequent albums, embark on countless tour and festival circuits – putting them on track to become a household name in the alternative scene.

Little did they know when playing their first gig together at the 400-odd capacity Buff Club, a few years down the line they’d be supporting the likes of My Chemical Romance, Smashing Pumpkins and Blink-182, as well as having their hit single ‘Heart and Soul’ premiered by Zane Lowe on BBC Radio 1 as the Hottest Record in the World.

The band are now just days away from the hotly anticipated release of their fifth studio album, Power. They announced its January 2020 release last October with its first single, ‘Novacaine’. A confident fusion of their usual guitar-based sound with an experimental synth-rock backbone, it was clear that Twin Atlantic wanted to start the new decade on their terms, with a self-described “no fuss, no fat, all fire” attitude.

I was excited to chat with Ross McNae – Twin Atlantic’s bassist and keyboard-player, to pick his brains about how he felt about the new era the band are entering.

We spoke on the morning after the release of the video for Power’s second single ‘Barcelona’, and it was clear from the first few minutes that McNae was genuinely (and humbly) proud of what the band had created. He also spoke fondly of Oxford, describing it as “worlds away” from any other place in the UK that tour had taken Twin Atlantic.

Eager to unpack the eight-track tour de force that is Power, I was interested to hear from McNae about the labour of love that had gone into its production.

He began by talking about how it was the first project that they’d ever recorded in their hometown of Glasgow – something that he feels is ingrained into the soul of the album. Despite its namesake being their hometown’s airport code, their previous album GLA was produced and recorded in Los Angeles – so for McNae, making the move to record in a familiar place gave the project a personal touch.

It wasn’t only the recording that took place in Glasgow; the entire creative process was focused into the band’s own studio in an “unloved corner of the city.” The space itself was ten years in the making, only in the last year or so has it become a fully finished space that the band are happy with. Ross joked that he wished he could see a time lapse from all the way back to when it was just a laptop and a couple of speakers.

I asked Ross how he felt knowing that the band now have a space that is completely their own, something concrete (both figuratively and literally) that emphasises the mark they’ve made on the Glaswegian music scene.

He replied earnestly that it feels like a “proper safe space,” comparing it to a pub that you go to with your friends that feels like your place. Whilst he admitted that the band don’t really go there much when not working, as they made the decision to not write a single thing outside of the studio. It’s a special place that holds memories and songs alike.

The decision to contain their creative process in one space changed the way the band worked for the better, Ross told me. When they had recorded previous albums the process was more layered; each of the members chipping in with their separate parts, later fitting them together. However in the case of Power, Ross described how they’d all come in every morning and brainstorm as a collective.

“We’d turn on the drum machine, just creating a groove and seeing where it went,” Ross explained, “it made it feel like the songs grew more naturally. They were completely born out of experimentation.” He owed this freedom to their newfound space, as there’s no room to experiment and build songs up in this way on other people’s time.

Ross attributed this idea of space to why Power feels decidedly different from any of their past LPs. When asking about the album’s second single, experimental anthem ‘Barcelona’, it was evident just how significant the role that space played was.

He told me that they found a collective confidence in the creation of this track in particular – encouraging them to experiment in ways that they hadn’t previously. Compared to previous records, they began not with guitars but with gentle synths – building it up slowly, and crucially, together.

As well as being experimental in a direction not previously explored by Twin Atlantic, ‘Barcelona’ features tender and vulnerable lyrics courtesy of lead vocalist Sam McTrusty; drawing upon turbulent times personally and creatively. This too was owed by McNae to space; “the space that we created allowed for us to put more emphasis on what we wanted to say,” he told me. “If you’re gonna have that space to be so open and bare musically, there’s not really much to hide behind lyrically.” He laughed this comment off, but it was evident in his tone how proud he was of what the band had created.

I asked him how he felt this translated into the newly released music video – something Ross also seemed to have immense pride in. He explained how the band had always tended to go along with other people’s ideas for music videos, however ‘Barcelona’ saw them take the same kind of control as they did with the music itself.

Shot partially in the ‘remote beauty’ of Kildare in Ireland, the video is a gorgeous three minutes and forty seven seconds of kaleidoscopic cinematography that fits the style of McTrusty’s writing to a tee. I’d read that the band had drawn from the type of shots used in films like Eternal Sunshine Of The Spotless Mind, and this certainly translated into the final product.

Ross joked that this was a video of theirs that he actually felt able to watch due to his physical absence. As opposed to the video for Power’s first single ‘Novacaine’ which simply features the band playing, ‘Barcelona’ goes down a more artistic route that aims to (and succeeds in) conveying the lyrical narrative.

We talked in length about the influences that the band drew upon for the project. Whilst track five (‘I Feel It Too’) had been compared to an “amped up take on Duran Duran’s ‘Planet Earth’,” I’d also read that the album as a whole “tapped into (the band’s) LCD Soundsystem fandom,” something I was keen to ask Ross about.

He said that whilst the sound itself wasn’t necessarily similar to anything in LCD’s back-catalogue, it was the way that James Murphy and co. engineered the fusion of guitar and electronic that inspired Twin Atlantic.

Doing something artistic with rock music has always been a shared passion of theirs; Ross took joy in recalling the nights they spent at art rock shows and parties, as well as when they used to study photography and art back in college. This creative spirit that yearned to blend together different yet complementary elements had always been there, but for whatever reason did not manifest itself in Twin Atlantic’s early music, Ross felt.

He told me how “having the time, space, and freedom to make our own mistakes have allowed us to get to a place where the music we are putting out is like the music we all love.” It’s not a case of drawing on new influences – the LCD Soundsystems and the Depeche Modes have always had a place in shaping Twin Atlantic’s sound. Rather, from talking to Ross I got the sense that they were finally at a place creatively that they felt confident to be as experimental as they may have previously wished to be.

From a listen through of the album, the final tracks (‘Volcano’, ‘Messiah’, and ‘Praise Me’) seemed like they were practically made to be played live – each with refrains that sounded as if they belonged on the lips of a crowd.

Ross spoke about how he felt that the new material would go down in a live environment. Ahead of their UK tour of intimate venues beginning this March, it was interesting to hear how the band themselves felt about bringing this new, experimental material to their audience.

“People have so much choice of what to do and who to go and see nowadays,” he explained. “There’s something about people choosing to come and see you, people deciding that you’re worth their time. It’s one thing people listening to our music but we really appreciate people coming out to see us.”

He went on to explain how because of this, their shows were first and foremost about giving back to their fans. “People come because for whatever reason our music means something to them, so we’re not looking to be self indulgent and just play a set of weird b-sides,” he laughed. “It’s just a huge celebration of fun, for an hour or two people can come and take their minds off their daily lives.”

Despite the new direction that the band seem to be going in musically, Ross didn’t feel like the way that they played live would change too much. Because they’ve tapped into something so personal, he feels as though the new album won’t sound out of place sandwiched between heavy hitting all-guitar fan favourites. He prides the band on always playing from an organic place and hopes that their fans will enjoy this touring circuit as much as they inevitably will.

It was refreshing to talk to somebody so genuinely empowered by the art that they are creating – and that’s the role that, I felt, Power has played for Twin Atlantic. It’s a love letter of sorts, to the fans, but more importantly to the band themselves, renewing a sense of experimentation and creative confidence to carry them through the new decade with the bold strides that took them through the previous.

Power is out on all digital streaming platforms from January 24th, on Virgin EMI.

If you like what you hear (and I’m confident that you will), you can catch Ross and the rest of Twin Atlantic on their Headline Tour and run of in-store appearances later in the year, details can be found at https://www.twinatlantic.com/

Wilde at heart: In Conversation with members of the Lincoln Drama Society