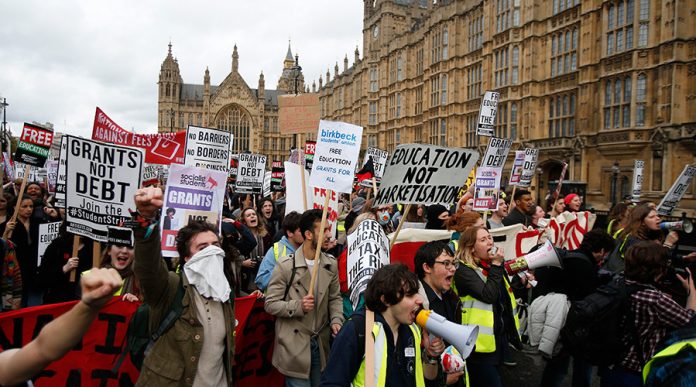 A typical student matriculating at a university in England in 2019 will accrue over £27,000 in student debt by the end of her 3-years undergraduate degree. While this amount is incomecontingent, and no repayments are owed below certain salary threshold – currently £25,725 – the debt contributes to increased anxiety levels for youth in their early twenties and constitutes an undue burden on those from most underprivileged backgrounds and graduates who did not secure high-paying jobs following their education.

Cutting annual tuition fees to £7,500, as proposed in the Augar review commissioned by Theresa May, would reduce some of those problems and is a move in the right direction. There are obvious societal benefits to having an educated population and no one should be penalised for exercising their right to quality education. Lower fees and reintroduction of maintenance grants will combat some of the inequalities plaguing higher education and allow for more meritocracy in the earliest stages of adult life.

The UK can learn from the example set by many other European countries where education is much cheaper and where everyone benefits as a result: students from the opportunity to develop themselves without the additional stress of few decades of debt repayment and the nation from increased social mobility and better educated workforce.

Current £9,250 does not cover all of the economic costs of a year at university in any event, as the universities themselves make evidently clear by charging non-EU students three or four times that amount. There is thus no convincing reason why the government may not take more of that burden on itself if it does already pay the majority of the costs incurred by universities.

The reduction must then go hand-in-hand with increased grants and other funding to universities so that they will not have to compromise on their teaching standards, educational resources and access provisions. There is no good in charging students less if the universities would end up worse off in the process and see the world-leading position of English institutions threatened in the long term.

Special care must also be taken to ensure that the reforms do not end up regressive in their nature. Proposed extension of loan repayment terms from 30 to 40 years would undermine the whole change and make people in their 60s pay for training that clearly did not benefit them enough to have been worth the effort.

This could mean that low earners would end up paying more in the process while high earners would benefit from reduced fees. As such, lower tuition fees should not be seen as an end in and of itself but rather as a part of comprehensive system of reforms that should ultimately make university degrees more accessible. A reform including reduced debt, maintenance grants, explicit expected parental contributions, and preservation of current fee liability period could be a good first step towards that goal.

Let’s hope the government will take on this challenge and will not let the issue be buried along with the Prime Minister who commissioned the report.

While the government’s offer to charge £1,750 a year less for university might seem initially appealing, the proposal as a whole largely fails, and needs serious reworking in order to improve our higher education provision. The cutting of feed is a fundamentally misguided and regressive idea that implemented in this manner will only give the rich ever more a financial advantage in accessing higher education.

The key issue is changes to repayment boundaries, lowering the income threshold for repayment while extending the period before student loan debt is forgiven. This means that more graduates on lower incomes will pay to service their student loan, while the longer period for repayment means anyone with a student loan will be repaying this for longer. Longer time until debt forgiveness will continue to affect those on lower incomes as interest remains at extortionate rates, likely almost completely wiping the benefit of £5,250 less for a degree through the horrors of compound interest, and forcing repayments to continue for the entirety of the 40 years. Here we are moving towards a system in which those on the vast majority of incomes are paying more to service their student loan debt than before, hurting the less prosperous in society.

All this means is that the only benefits of this scheme will accrue to those rich enough to pay upfront for their degree, paying far less to avoid the full working lifetime of repayments everyone else continues to face. What is needed is not slightly lower fees coupled with longer repayment schedules, as this makes our system even worse: what is required is a graduate tax, levied equitably upon all graduates in a manner that prevents the rich from escaping the continuing financial burden levied upon everyone else. To do otherwise would be to ignore the real outcomes by focusing excessively – and idiotically – on the initial fee. But students are not the only ones hurt here.

While the extension of repayments makes this proposal relatively economically sound for the government, universities will be receiving far less money per student. Such pressures on already financially stretched institutions can only worsen the quality of higher education provision, with the need to on-board unrealistically high numbers of extra students resulting in crowded classrooms, shoddily expanded facilities, and negligible real teaching hours. The government is suggesting financial measures to boost their funding, but aren’t committing to anything that will suggest their overall funding won’t drop.

Since 2011, there has been an excessive focus placed upon the £9,000 (then £9,250) level for tuition fees, and it is manifesting today in a regressive proposal designed to be politically amenable but economically regressive. A graduate tax is a fairer, more equitable solution to the Kobayashi Maru of reconciling student fees to university funding, and we must not accept this Trojan Horse ‘gift’ of lower initial fees.