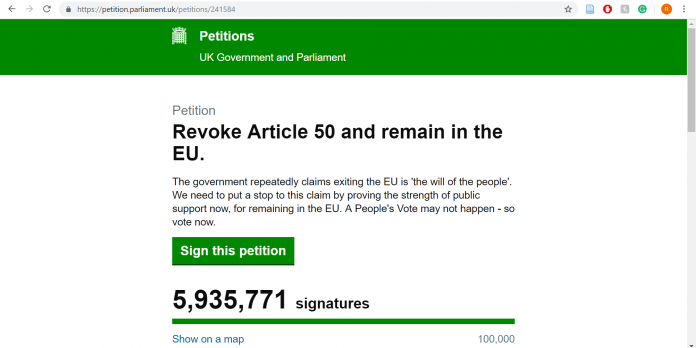 Noisy criticism has erupted over the petition to revoke Article 50, decrying it as yet another ugly, anti-democratic manifestation of the zombie Remain campaign, that continues to haunt this nation in the guise of forty-year-old centrist dads and Alexa Chung, spread by the ineradicable disease that is the #FBPE Twitter hashtag.

MPs who dare to speak out in support of such a proposal, including the Conservative, SNP, Lib Dem, Plaid Cymru and Independent Group members who signed Joanna Cherry’s resolution to revoke Article 50 (which was put to the Commons yesterday), have been lambasted as traitors throughout the Brexit process. Signatories have been demonised as fanatics, willing to overrule the current of public opinion in their attempt to turn the UK into the vassal state of the EU without mandate.

Yet our current default position – no-deal – would achieve exactly this, placing us instantly into the position of a petitioning poor relative, accepting whatever crust of a trade deal that the US or the EU deign to offer us while lacking any support from the British people or their representatives. Rather than having revoking Article 50 as the default situation in the event that Parliament failed to negotiate a deal that appealed to all members of parliament, we have instead adopted a self-destructive alternative that seems less to do with putting pressure on the EU to offer us a good deal then blackmailing MPs into accepting a highly inferior political and economic relationship.

Revoking Article 50 was one of the proposals debated in yesterday’s series of indicative votes, along with EEA/EFTA style arrangement and no-deal. It was practically inevitable that both no-deal and Revoke, as the two poles in this debate, would be nixed. Given that each of the other possibilities for our future relationship with the EU – EEA membership, a customs union, Canada-plus, May’s deal itself – have each ridiculed as ‘unicorns’ by some portion of the House, it is unsurprising that none garnered majority support, resulting in the day ending inconclusively.

Putting aside the fact that the government can completely ignore yesterday’s outcomes, Parliament itself has been stymied. Whatever anyone says, there is still a dangerous risk of crashing out on 12th April despite the Commons having twice rejected it. No-deal has no more mandate than revoking (at the time of writing, a petition for leaving with no-deal attracted just under 590,000 signatures, in comparison to Revoke’s 5,935,000 signatures) and will have real detrimental consequences for the entire population of this country that seems the height of naivety to ignore.

Like any term remotely related to Brexit, revoking Article 50 means different things to different people. Many of those calling for Article 50 to be revoked are also supporters of a People’s Vote, but conflating the two is a confusion of Brexit outcome and the process by which such an outcome is reached – hence the two were tabled separately yesterday. Personally, I think that any deal that we decide on should be ratified by the British people – whether Revoke/Remain is on the ballot paper or not.

Equally, revoking Article 50 need not require a second referendum: instead, it should be, instead of no-deal, implemented as our default option. Furthermore, while some would like to use revoking Article 50 to give us more time to negotiate a ‘compromise’ with the EU, there is an argument to be made for simply revoking and remaining a member. As pundits keep telling us, we want the government to ‘get on with it’. We have had two years to negotiate Brexit, and we have failed. If we revoke Article 50, it should be a decision to permanently remain.

This may sound controversial, undemocratic, taboo. This reaction has been created by the narrative that has been sown over the past two years, beginning with Cameron’s initial, perhaps throwaway, mention of the ‘will of the people’ that has served over the last two years to morph our popular conception of democratic principle to mean a fatalistic, blinkered, obstinate adherence to a notion of ‘Leave’ that itself changes meaning from week to week. Even if today’s statistics had not suggested that 55% of now Remain in a second referendum, in any other situation of proposed change – for instance, in business – if such a change was unachievable, the natural position would always be the status quo.

Revoking Article 50 after two years of negotiations may sound defeatist. But given that even the series of ‘indicative votes’ yesterday have been branded a “constitutional revolution”, taking back control from the ERG ‘Grand Wizards’, who have been the architects behind the no-deal default, would be an act of strength. Neither, in the event of revoking, would the last two years have been for nothing. Both Leave and Remain voters were chronically ill-informed about the EU and the UK’s current relationship at the time of the initial referendum, that amounted on both sides to a lack of interest in European policy that had always rendered the Union’s actions tainted with accusations of unrepresentativeness.

In our new state of enthusiasm, as the one million marchers proved on Saturday, we are perfectly poised to go back into the European Union with new zeal and urge for greater collaboration. Today’s greatest problems – climate change, migration, populism – transcend national borders, and remaining in the most powerful collaborative bloc on the planet would surely only be a progressive step.