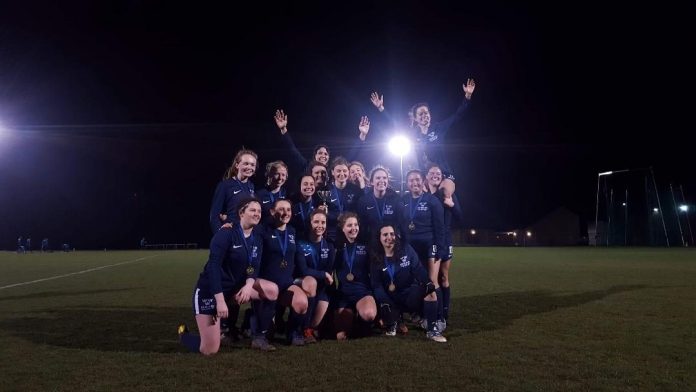 On a sunny but very windy afternoon on Sunday 10th March, the Women’s Football Blues faced Cambridge in their annual Varsity match at the Hive Stadium in Barnet. The stakes were high – with their BUCS season drawing to a close, this game was the climax the team had been preparing for all season. Perhaps the fact that Oxford had already faced Cambridge twice in their BUCS run this season made the competition even fiercer; a 0-0 draw between the two sides in late January demonstrated that Varsity was either team’s for the taking.

Both teams got out of the blocks fast at the start of the game, making for an exciting first half. Although Cambridge did seem threatening at times and were putting Oxford under a lot of pressure by playing a particularly high line, the Dark Blues were able to keep them at bay and captain Lucy Harper led her defence well to snuff out any hope of glory for the Cambridge attack.

Oxford were equally keen to apply the pressure in the Cambridge half and wingers Erin Robinson and Katie Plummer made some great runs down the pitch which were difficult for the Light Blues cut out. However, with the Oxford forwards often being found offside, it was hard for them to break the deadlock and consequently the teams went into halftime with the score still at 0-0.

However, early in the second half, Cambridge were able to break Oxford’s resolve, and after a fumble in the box the ball came out to the edge of the area for Cambridge’s Ashcroft to propel a shot into the top right of the goal and put the Light Blues ahead. Two minutes later, the Tabs extended their lead after a corner that was not cleared up by the Oxford defence.

Despite this, Oxford did not let their heads go down and the next ten minutes of the game were extremely tense, with the Dark Blues desperately trying to close the gap between the two teams. Eventually, first-year duo Taiye Lawal and Rani Wermes were able to link up in Cambridge’s box, before Wermes went down from a foul and earned Oxford a penalty. Substitute Monique Pedroza stood up to the plate and smashed the ball high into the net to put Oxford level, much to the delight of the Dark Blue crowd.

Unfortunately for the Oxford team, as the match drew on they were unable to find any more luck in the Cambridge half, and at the other end of the pitch, Cambridge were awarded a penalty from a rather dubious handball and were able to make it 3-1, effectively sealing the deal and winning the game.

As the final whistle blew, Oxford were clearly filled with despair over their loss. However, such a valiant performance gave them much to be proud of, and the Dark Blues will be hoping to work harder than ever next season to claim back the trophy.

Despite this loss, the Women’s Reserves (the Furies) were able to find success against Cambridge Reserves (the Eagles) on home turf at Iffley on Saturday of 7th Week. The Furies found themselves 1-0 up after a through ball from Jasmine Savage reached the feet of captain Rebecca North who slotted the ball firmly in the back of the Cambridge net. However shortly after, Cambridge managed to breach Oxford’s defence, and after a two on one situation with Oxford’s last woman, were able to equalise with a short range shot on goal.

Going into the break the score remained 1-1, but neither team had any luck in the second half either, meaning at the end of the 90 minutes, the game went straight to penalties. The tension in the stadium was riding high, but Oxford kept their cool. After four goals from four Furies and three goals and a miss from Cambridge, the final Eagles penalty taker was hoping to keep her team in the game. However it was not to be, and an admittedly easy save from goalkeeper Emmie Halfpenny saw the Furies win Varsity for the second time in a row.

As the whole of the Oxford team sprinted from halfway to celebrate with their keeper, it was easy to see just how much this Varsity win meant for the Furies, who had worked so hard throughout the season for this moment.

With one cup spending a year at The Other Place, and the other cup held firmly in Oxford’s hands, all we can do now is wait until next year to see if OUWAFC are able to do the double over Cambridge.

Lionesses with a loud roar