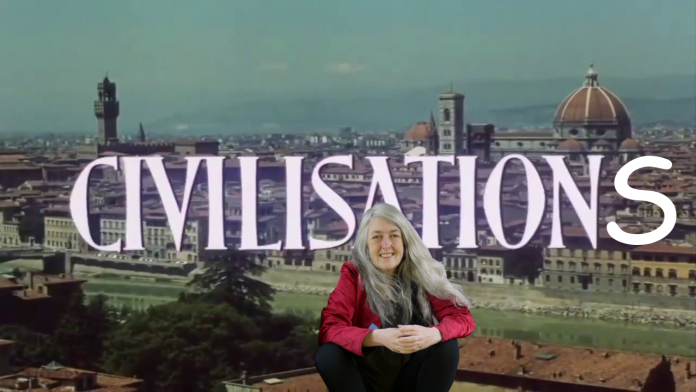 Civilisations, on paper, should work. Its aim is to update Kenneth Clarke’s documentary series Civilisation, which aired in 1969 and traced the development of art across history. The original series gained plaudits for its high production standards, thus setting the bar for the BBC history documentary over the next fifty years.

But it also came in for sharp criticism for its exclusive focus on male artists, for its deterministic depiction of the development of the Western canon, and for its Eurocentrism. Not surprising, for a documentary crafted 50 years ago, but Simon Schama, Mary Beard, and David Olusoga, the terrible trio chosen to update this BBC relic, fell foul of all the same potholes. Tasked with modernisation they didn’t quite pull it off.

Civilisations, try as it might, can’t break free from the paradigm of Eurocentrism. It’s really the story of one civilisation; the plural in the title is merely decorative. Mary Beard as a classicist,  predictably speaks mainly about Ancient Rome and Ancient Greece. In the episode ‘How Do We Look’ she touches upon Olmec art, but even this is considered from a ‘European way of seeing’, an understanding within the bound of the cognitive world of a European looker.

The underlying, and seemingly unalterable, issue here is that BBC shows are produced for BBC audiences, who in their vast majority are British. Our cultural upbringing, our education, and the world around us have fed us the same teleological narrative which Civilisations can do little to escape; The classical civilisations of Rome and Greece begat the Renaissance, which begat the Enlightenment, which in turn begat industrialisation, which begat the modern world.

Popular history appeals to this familiar storyline, by giving us Lucy Worsley talking about how the Tudors and the Stuarts helped forge the Britain we know and love today, or Dan Snow recounting how Winston Churchill inspired the nation to overcome the greatest evil the world has ever faced.

David Olusoga reinforces this narrative in ‘First Contact’. The aim of the episode is a noble one: to show that cultural synthesis is the product of two civilisations coming into contact with one another. Yet every example he gives is of a European as the active agent in the relationship. This serves only to reinforce the idea of European dynamism and superiority in the so-called ‘Age of Discovery’.

Where is the blending of Indic and Islamic art forms which happened across the subcontinent; what about the first contact between the societies of South East Asia and the Sufi mystics who dominated the Indian Ocean? These major ‘first contacts’ don’t get airtime because they would confuse and unsettle audiences; an early modern world culturally dominated by Islam would not fit in with the narrative of European progress and civilisation, so it is helpfully removed from the narrative.

Civilisations shows us what is wrong with television history: it is comfortable, easy, armchair viewing that reaffirms the place of Britain, and of the West, in the minds and the eyes of the viewer. It doesn’t challenge its audience to go beyond the pales of their imaginations and consider a truly different hierarchy of world civilisations where the West isn’t on top.

Most damningly, Civilisations fails to grapple with perhaps the most fundamental issue when approaching comparative and inclusive art history; the study of art over time as an academic discipline is itself a Western invention.

Civilisations rarely offers the opportunity for non-Western art, and more broadly non-Western culture, to be seen on its own terms, and treated in its own right. Civilisations pitches itself as a ground-breaking reimagining of art history documentaries. Unfortunately, we are still waiting for such a renaissance.

Why we should care about Warhol