Anya Biletsky muses over what this chain means to Oxford students. 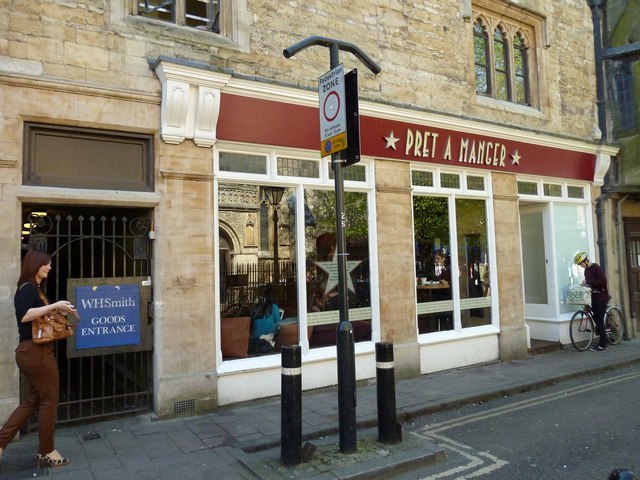 It was recently announced that two new Prêt À Manger locations are coming to Oxford. And yes, this is important news.

For many students, Prêt is a special spot. From bashing out the last of an essay in the morning before sending it off and rewarding oneself with a hot chocolate, to winding down with friends after a particularly excruciating tute, the uneven floors and perilous ceilings of Tudor Prêt on Cornmarket Street afford some surprising comfort and cosiness to worn-out students. I have oft made plans with fellow Prêt-loving friends with a simple “let’s meet at Prêt”. No qualms (how could there be!), just a delighted friend on their happy way to meet me.

As well as Tudor Prêt, there is the smaller Prêt at the end of Cornmarket, and the tantalisingly luxurious but lamentably distant Westgate Prêt. One of these, if Tudor Prêt has disappointed for lack of your favourite bakery item, will be sure to provide. Although queues sometimes stretch out the door, it would take far more to deter students from what is possibly one of Oxford’s most beloved cafés or lunch spots.

The new Prêts, we are told, will be located in Summertown and at Oxford Station. Students living out in Summertown need worry no longer about having to make an inhumane trek to put a Prêt cappuccino to their lips, and those travelling into Oxford by train will receive the warmest of welcomes to the city with a Prêt mocha or chai latte.

One of the reasons Prêt is so popular among students is its famous Prêt Subscription. If you tend, as I do, to get a coffee every day, the subscription is undeniably good value, coming to less than a pound per coffee if you buy one every day for a month, which is perfect to avoid over-spending on hot drinks during term.

Aside from being a place to caffeinate, Prêt has become a camouflaged Cupid, an uncharted Tinder. One may not initially associate the innocuous café with romance, but the 17th-century wall panelling seems to contain within it the power of match-making (watch out, Cherpse!). The number of Oxloves that are addressed to beautiful, mysterious strangers spotted in Prêt is notably high – but perhaps not so remarkable given Prêt’s swoon-inducing double-chocolate cookies and Berries and Cherries smoothie, which make it of little wonder that there is an unnaturally high concentration of giddy individuals in the place.

I am far from alone in my Prêt-thusiasm. The Facebook Group OxPrêt has garnered nearly a thousand participants since its creation in May this year. The success of the page, which updates its subscribers on the current status of each Prêt (you are told Tudor Prêt doesn’t have ice, so don’t bother with that iced latté you were dreaming about), is testament to a certain Prêt culture within the Oxford student body at large.

OxPrêt founder Jenny Grehan-Bradley told Cherwell that while she initially founded the group as a “joke”, as she and her friends were frustrated about “wasting time going to Prêt and finding out there’s no ice”, she was surprised that “after 20 minutes we had 100 members” – rapid growth indeed. A celebratory post to mark reaching 100 participants was not the end, however, as the group has gone from strength to strength, regularly welcoming new members. Jenny stated that it was especially unexpected for her that the participants of the group have extended “beyond [her] social circles”.

Daily photos shared in the group of members claiming their Subscription drinks, munching on croissants or proudly sipping on those coveted smoothies make the page “a community in its own way”, as Jenny states. Jenny’s own go-to is an “iced caramel latté – but if there’s no ice, a flat white”.

The café, and, now, the Facebook group, have united coffee lovers and “no ice” lamenters from across the university. Like puffers, the RadCam’s poor wifi, and Oxfess, Prêt has become a bit of a university-wide inside joke, if an especially fond one. And so, with the news that a whole two new Prêts are to arrive to the city in the coming months, Oxonians can, fully caffeinated, rejoice.