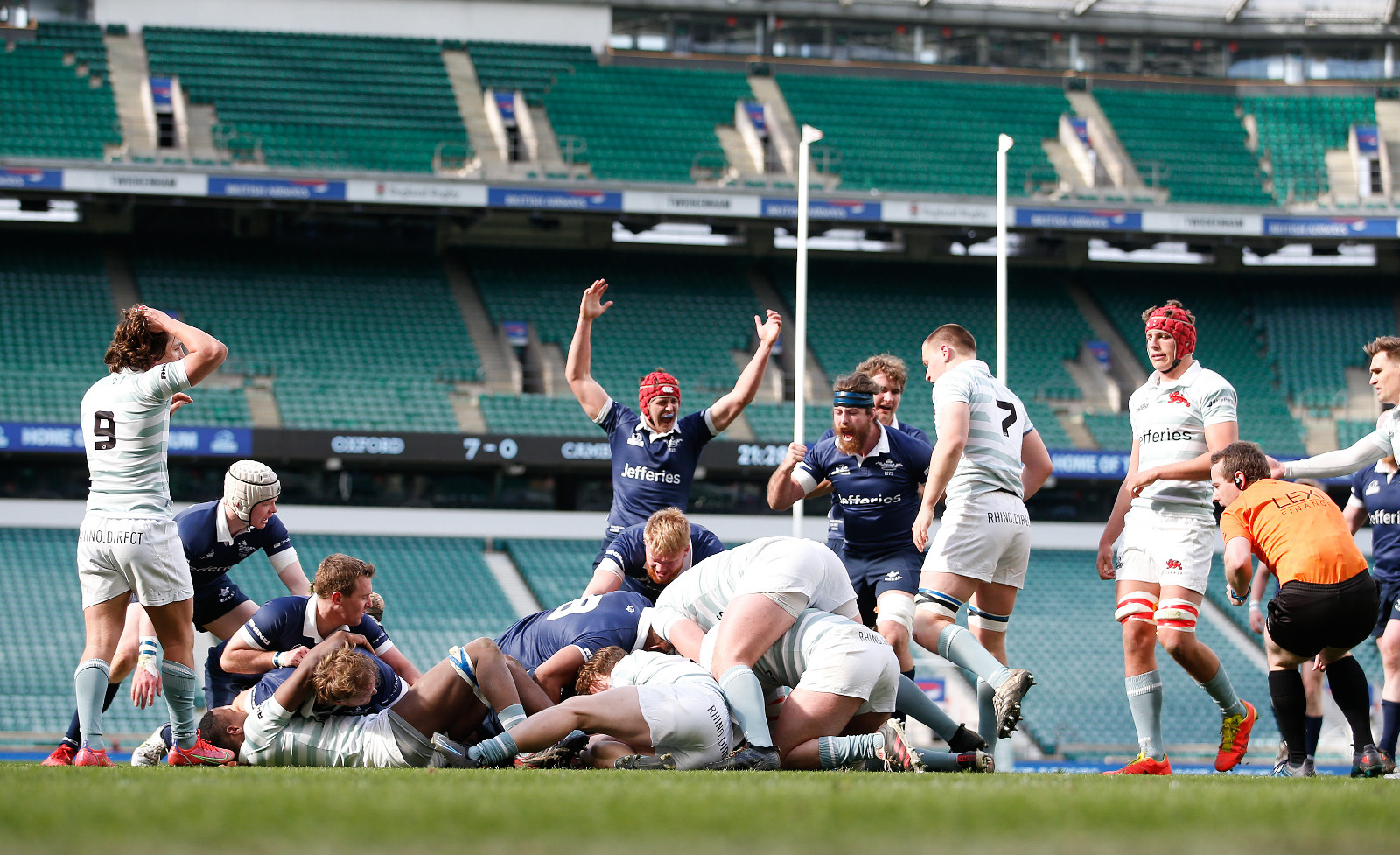 The Varsity Matches returned to Twickenham. There’s a first in the rugby Varsity matches, being on the same weekend of the Boat Race, which will finish just a few minutes away on the River Thames in Richmond 24 hours later.

What a glorious weekend it is in West London for British amateur sport. It all begins with a kick of a ball in the women’s rugby Varsity Match and it will all end with a splash of a cox being thrown into the River Thames on Sunday afternoon, live on BBC Sport. Regrettably for rugby, Claire Balding’s illustrious TV presenting was spared for The Boat Races, but the rugby Varsity matches were live on FreeSports HD.

Fresh from bottomless brunches and morning drinks, Oxford and Cambridge students and alumni stormed to Twickenham, crowding only fragments of the lower tiers of the 80,000 seater stadium. Perfumes of ale in the stadium, folks bizarrely dressing up in dashing fashion, intermittent yelps of Oxford and Cambridge, this is what Varsity is all about.

12:30, and the women’s matches were underway. Cambridge no doubt dominated the early parts of the match. Trapped in their own half, Oxford’s phases of play were unable to unpick the connected Cambridge defence. The white-and-light-blue striped forwards frequently earned penalties from tidy ruck work.

A blow to Oxford, a try for Cambridge, right in the corner, Hetta Friend, coming from a penalty located just by the 5 metre line. The women in the dark blue shirts had no choice but to reset. And oh, Oxford came back grooving through their set plays, thumping down the Cambridge defence.

An energetically pacey try for Oxford, but pulled back for an earlier forward pass by Alexandra Travers. For a moment, the Oxford defence were left a tad baffled, with Cambridge number 12 Tabbie Brough pulling through with a strong run putting Oxford on the backfoot. But another extravagantly delicious play from Oxford off a scrum led gameplay from within their own 22 to Cambridge’s own 22.

Oxford number 15 Clodagh Holmes’s God-given gift of remarkable speed saw her level the scoreboard, only for the referee to again pull the try back for an earlier forward pass. As the match was nearing half-time, Oxford’s various illusionary lines deceived the Cambridge defence, opening an overlap round the egdes of the Cambridge defence.

The ball seamlessly slipped out of Oxford’s smooth hands, with the quickness of the play accelerating at every pass. Eventually, Oxford’s Megan Isaac finally put the ball over the Cambridge try line, chopping through the line of white and blue before the half came to a close. Oxford level with Cambridge.

Once the second half got underway, Oxford’s confidence soared as Lauren Webb, Oxford flanker, poked herself through the Cambridge defence to put Oxford 5 points ahead. Oxford 10-5 Cambridge, but much of the half was still to go.

The Twickenham warzone was stuck in stalemate for much of the second half, with neither side keeping their hands on the ball for too long. Various stoppages to play through injuries to both sides similarly slowed gameplay down. With every minute, the Cambridge women’s strength grew. Jessica Abele, the Oxford captain playing her fourth and last Varsity Match, having won for the other side in 2018, was perhaps lucky to stay on the pitch after her attempt at an interception saw the ball being slapped down onto the beautifully woven grass pitch.

With Mahnon Jones out on Six Nations duty with Wales, Colombian Olympian Estefanía Ramírez Castillo played at 9 for Oxford. One moment in the second half saw her chase down her own kick, catching it in her stride to hoist Oxford up the field. However, Cambridge retaliated, pushing Oxford to their own 22 with the full time whistel in sight. Lauren Webb of Oxford managed to hold up one ball on the line to avert a Cambridge try, but Cambridge’s restless run of phases resulted with a try by Vianney Gomezgil Yaspik right underneath the posts. An opportunity to put the Tabs ahead was missed as the conversion veered away from the right side of the post.

No opportunity was left for more points on the board, so neither Oxford or Cambridge teams would go home crying as the first Varsity match of the day ended in a 10-10 draw. The celebrations may not have been all too jovial, though, with both captains lifting the trophy together, but neither club could be disappointed. The match was a fiercely balanced contest, with many purple bruises likely to be showing by the time the post-match drinks get underway.

The fragments of crowds had grown in population by the time the men’s teams were warming up- that is, just over 10,000. Leicester, where the matches were played last year, was celebrated as a geographically-sound location for a Varsity fixture, due to its equidistance from Cambridge and Oxford. In a time where broadcasting rights for fixtures But Twickenham, the home of rugby, was made for the Varsity Matches- as well as England Rugby, and a couple of concerts each year.

All eyes were surely on the Cambridge number 10, Toby Flood, the former England international with 60 caps. International experience had proven key to them just three years ago, when internationals James Horwill and Flip van der Merwe, of Australia and South Africa respectively, played as monstrous locks terrorising the Oxford team in a 15-0 victory. Oxford too boasted some internationals in their lineup today, including American players Eric Fry, Nick Civetta, and Andrew Durutalo, who was man of the match last year. Dan Carter, who joined the Oxford Foundry this year, was lamentably not involved in the OURFC setup at all.

As the warm-ups concluded with Oxford walking into the tunnel gripping onto each other’s shirts, anticipation for the standout university men’s rugby fixture of the year was about to be relieved.

Oxford kicked off into a corner, with Piers von Dadelszen swiping Cambridge’s winger off the ptich with a strong hit. Oxford’s momentum was set at a high standard from this point, forcing through penalties from Cambridge’s squad.

Keeping Cambridge well at bay from their own half with some flying kicks from fresher Sam Reynolds, who was playing as a full back, Oxford’s Callum Grant popped a ball to Luke Wyllie, sprinting underneath the posts to put Oxford ahead.

While David Wilkinson of St Edmund Hall was busy with his conversion, all three referees were seen on the stadium screen, but looking up at their own reflection, apparently waiting for a replay of an earlier incident. The incident showed Charles Friend, playing at 4 for Cambridge, stamping on an Oxford player. A repeat of last year when Bertie Watson of Oxford was sent off for a similar deed, Friend was sent off with over 60 minutes of the match still to be played. His namesake, Euan Friend, was now the only Friend on the pitch, playing for Oxford, with his brother Arthur Friend likely to come on in the second half.

Cambridge’s fortunes worsened, when Oxford doubled their lead after Nick Civetta scrambled to place the ball over the line after various pick-and-gos. The call by the referee was initially that the ball was held up, but the beauty of playing at Twickenham might be the opportunity of TMO decisions. Wilkinson neatly converted the try from a tight corner, with his oppositie number, Toby Flood, yet to get a chance at kicking at the posts.

A third try came by Andrew Durutalo, after a spine-crunching scrum pushed Cambridge back. Reliable David Wilkinson once again converted to put Oxford 21 points ahead.

Cambridge’s prospects of a Varsity win were looking thin, even at this point in the first half. One opportunity to protect survival, or at least avoid complete embarassment, and put points on the board was fluffed, after a ball was dropped following a lineout right by Cambridge’s try line. For the rest of the half, matchplay stuck mostly to the middle third, with Oxford expertly dictating possession. As classic sporting clichés go, a miracle was needed for Cambridge to reverse the scoreline and avoid a humiliating shoe-ing.

Despite being a man down, Cambridge brought out various improvements to their game in the second half, but not quite the cat out of the bag. Oxford continued to maintain their ground, with powerful hits by the likes of Civetta taking Cambridge’s men down.

Cambridge’s velocity quadrupled, with players taking the ball at considerbale speed. A neat play by Cambridge saw Tim Andrew slice through a hole in the middle of the park, before Sam Reynolds brought him down. Subsquent phases of play saw Cambridge throw the ball away out of touch.

The Tabs persisted, and their determination led to more strong breaks and possession in Oxford’s half. After some pressure near their try line, a kick put out to Cambridge Douglas Russell bounced inside the try area. Just as the ball was bobbing out of play, Russell managed to catch it and dive onto the ground with the ball. Another tight TMO decision ruled in favour of Oxford, and the referee brought the call back to an earlier scrumdown. Exasperation for Cambridge, some fresh reassurance for Oxford, and the minutes ticked on. 21 points still separated the two classical universities.

Swing Low, Sweet Chariot was not the tune of Twickenham today. The slow melody was replaced by slow repeated chants of “Oxford”, while Cambridge supporters were heard busy hissing every time the referee raised his hand pointing to the Oxford end. A balanced match then saw a sudden upsurge of energy from Cambridge, with the ball then again falling astray in the try zone. Sam Reynolds dived on the ball and got a hand on it, before Russell caught the bouncing ball and put it down for what looked like Cambridge’s first try of the match. However, TMO stunningly ruled in Oxford’s favour once again, showing that Reynolds managed to put the ball down inside the try area. More boos could be heard from the Cambridge crowd, unsurprisingly.

A try came minutes later, however, when Luke Parry capped off a maul, initiated at a lineout. Jamie Benson’s conversion, however, hit the post, with Flood not on the pitch.

Yet Cambridge came firing again, with Demi Obembe running the length of the pitch and averting diving tackles to score. Again, Benson’s kick his the post. Oxford suddenly faced some pressure in the game, nonetheless, as Cambridge had significantly reduced the deficit in the scoreline.

Oxford’s organisation tamed Cambridge’s short-lived momentum. An impressive display from the one-man-short Tabs in the second half saw them continue to challenge Oxford’s lead. In the match’s last play, Alex King found space to score, bringing the final result to 21-17. But, alas, Louis Jackson can celebrate being the youngest Oxford captain to ever win a Varsity match in its 140-match history.

After the women’s match ended in a draw earlier in the day, it is safe to say Oxford win Day 1 of the Varsity Weekend. On to the Boat Races.