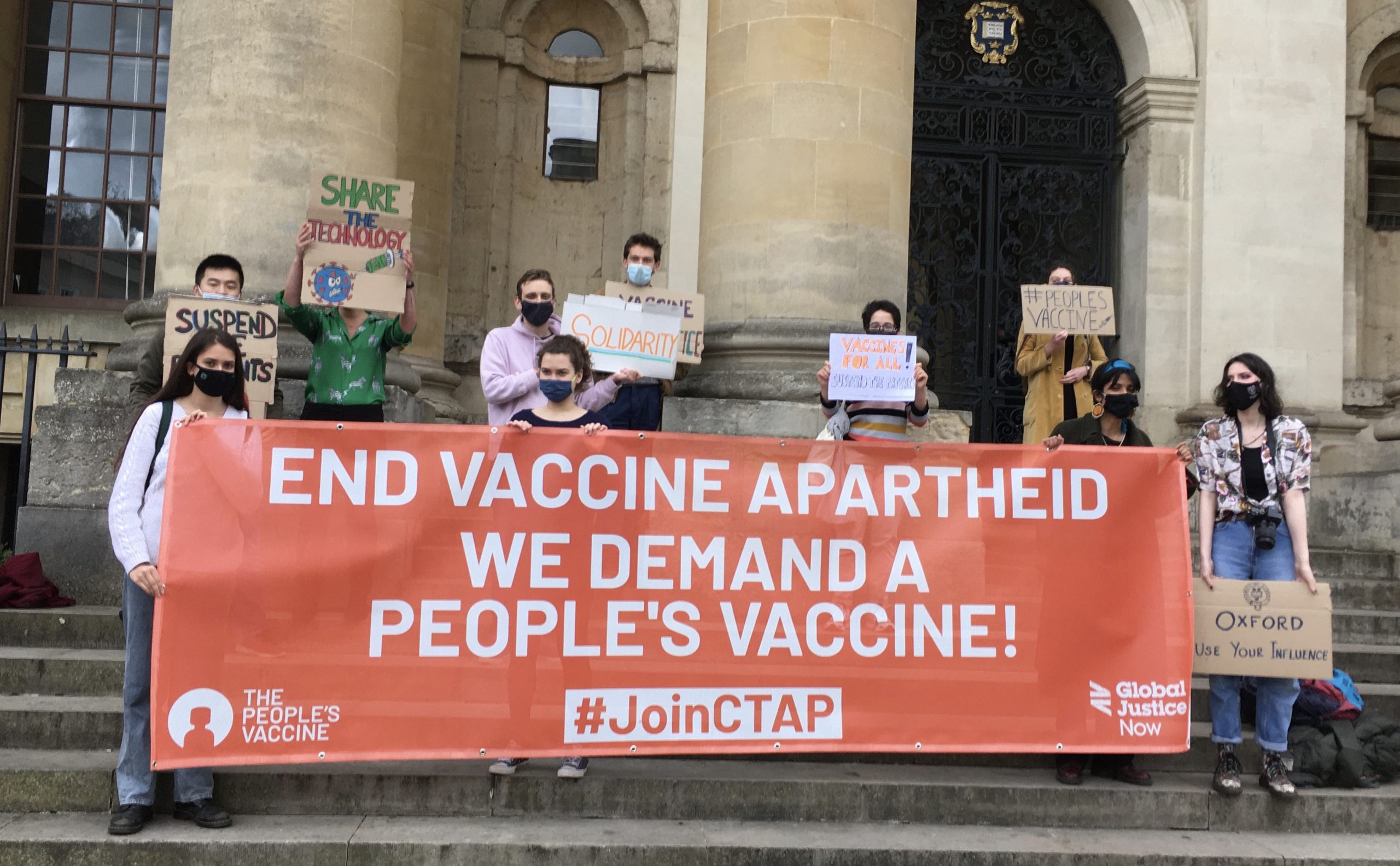 Protesters on Broad Street have demanded that a “People’s vaccine” be made available to combat the COVID-19 pandemic. The demonstration was part of a “global day of action” organised by the People’s Vaccine Alliance, a “coalition of organisations and activists” who are calling for pharmaceutical companies to share information about how to produce COVID-19 vaccines with laboratories around the world.

Students and campaigners gathered to raise awareness of the campaign, and call upon Oxford University to use its influence to encourage companies to share their technology.

Currently, intellectual property rights prohibit laboratories who are not affiliated with vaccine developers from producing their own supplies of the vaccine. This means countries cannot produce their own vaccine supplies, and either have to rely on global health initiatives such as COVAX. Meanwhile, richer countries have been able to stockpile supplies of the vaccine by purchasing over a billion more doses than needed for their population.

The People’s Vaccine Alliance are arguing that once these intellectual property rights have been waived, companies should share their knowledge and the biological materials needed for vaccine production through the COVID-19 Technology Access Pool (C-TAP). The scheme was set up by the World Health Organisation to “share COVID-19 health technology related knowledge, intellectual property and data” in order to ensure fair distribution of resources which could combat the pandemic.

Molly Clark, a student at Merton College who is also part of the Oxford Climate Justice Campaign, told Cherwell that the demonstration was particularly important given that they were held on the same day as AstraZeneca’s annual general meeting. She continued: “When they did the research for this vaccine, they had this vision that the vaccine could be used across the world, and not only by governments who could pay a high price. We want to make sure that AstraZeneca stays true to that vision, and doesn’t allow wealthy countries to hoard the vaccine while others suffer”.

Ms Clark also drew parallels between the lack of parity in global vaccine distribution, and the consequences of climate change. “We often see wealthy countries, particularly in the global north, consuming and consuming. Then it’s nations in the global south which are often suffering”, she added.

Nicole Jashapara, a student reading English at Linacre college, also spoke to Cherwell. She said: “97% of the funding that went into making the AstraZeneca vaccine was either from public funds or charitable funds. And yet it’s now patented by a private company. We don’t believe that big pharmaceutical companies should have the right to control vaccine supply and demand. They should be publicly available”.

Jane Burt, an environmental consultant and educator from South Africa, was also present at the demonstration. She highlighted how the slow pace of vaccination in the country had hampered “There’s no way South Africa can keep lockdown. The economy just collapsed…when there was a lockdown people were starving. They’d lost their jobs. Starvation became more of a risk than COVID-19.

“I felt guilty getting the vaccine here. I just want people to know that [COVID-19] is destroying people’s lives, and children’s lives. I watched it in South Africa with the HIV pandemic, where a whole generation died. For ten years they fought for the patent to be dissolved. In that time, millions died.”

In Cambridge, protesters blocked the entrance to the venue where AstraZeneca were holding their annual general meeting. Four arrests were made.

Nick Dearden, Director of Global Justice Now, told Cherwell: “It is simply shameful that Big Pharma companies like AstraZeneca refuse to openly share the vaccine knowledge and technology they control. It’s no wonder that people are angry and we applaud those who engaged in civil disobedience today to protest against this vaccine apartheid, in which our own government is also complicit.

“That these young activists are willing to put themselves at risk like this should shake company executives, who seem more concerned with trying to add millions of pounds to their already whopping salaries today than waive their patents and ramp up production.

“We will not be silent in the face of this injustice and today’s action is surely a sign of things to come unless Big Pharma immediately gives up its monopolies and the British government stops putting corporate profits ahead of the lives of millions around the globe.”

A spokesperson for Oxford University told Cherwell: “The vision for the Oxford vaccine has always been that the University wanted to make it available to the world.  That is why we were determined to do so on a not-for-profit basis for the world during the pandemic, and in perpetuity for low- and middle-income countries.

“It is also why we have partnered with AstraZeneca, with their extensive world-wide development and manufacturing capabilities. This partnership has meant the vaccine is now approved and licenced for use in over 165 countries, and over 300 million doses have already been delivered from over 20 manufacturing sites across the world, including the Serum Institute of India.

“The manufacturing of adeno-virus vector vaccines is complex and requires significant investment in infrastructure and expertise to ensure the safety and quality of the vaccine. That is why significant technology transfer continues to happen between AstraZeneca’s 20 global manufacturing sites and their supply chains.”

A spokesperson for AstraZeneca told Cherwell: “We agree with the view that the extraordinary circumstances of the Covid-19 pandemic call for extraordinary measures. AstraZeneca has risen to the challenge of creating a not-for-profit vaccine that is widely available around the world, and we are proud that our vaccine accounts for 98% of all supplies to COVAX. We have established 20 supply lines spread across the globe and we have shared the IP and know-how with dozens of partners in order to make this a reality. In fact, our model is similar to what an open IP model could look like.”

Have A Hot Girl Hilary!