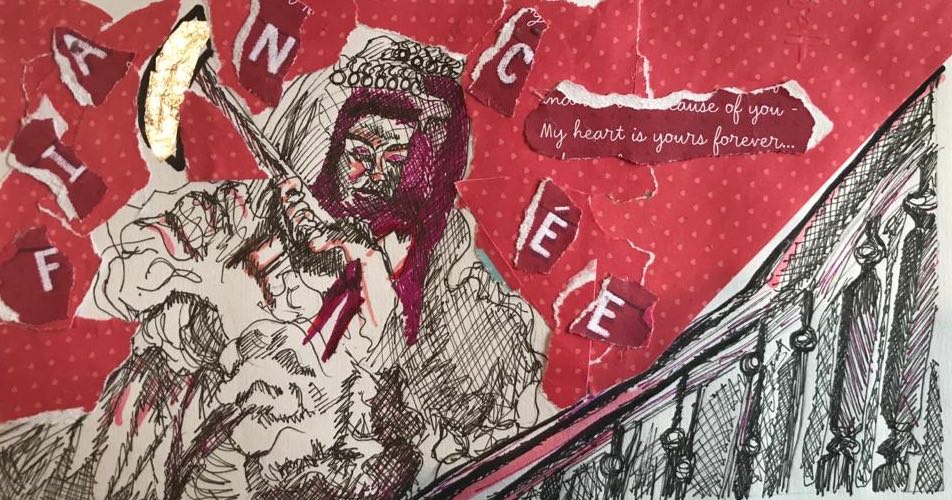 She’s ‘sweet but psycho’, ‘torn’, ‘pushed […] to the edge’. Ava Max (born Amanda Ava Koci), the Albanian-American pop singer who shot to stardom following the 2018 release of her hit single, ‘Sweet but Psycho’, capitalises on a heavily lip-glossed and lycra-ed image of the crazy ex-girlfriend in this single, as well as in ‘Torn’ and ‘Who’s Laughing Now’ (2020). The persona that Max cultivates in these three videos is so overdone that it could be a cynical deconstruction of the ‘crazy’ stereotype, rather than a reinforcement of it. However, could the effect ultimately just be a reproduction of old misogynist tropes, changing nothing and possibly even fuelling the faithful old fire of patriarchy?

As someone who identifies as a woman and who has at times been disabled by mental illness, this question is personal and political to me, as all feminism should be. Leaving a ream of male critics and journalists to debate the intricacies of Max’s portrayals is short-sighted of the music criticism community; I hope to offer a more invested voice to the conversation.

Max herself claims the prior of ‘Sweet but Psycho’, ‘[At first, people] think I’m actually calling them psycho, but then it’s a deeper meaning’. For ‘people’, read ‘women’, here – or, rather, a White, straight woman. The three videos star Max as a ‘crazy girlfriend/ex’ figure who wreakes stylised, violent revenge on the (exclusively male and White, notably) boyfriends/exes/bosses who have wronged her. Of the three archetypal Romantic madwomen identified by Elaine Showalter in The Female Malady: Women, Madness and English Culture, 1830-1980, Max chooses to employ ‘the violent Lucia […] symbolising violence against men’. So a woman reclaims power, exclusively against men, through ownership of the very ‘psycho’ stereotypes which try to hold her down – right?

In ‘Sweet but Psycho’, Max’s revenge seems to be on men generally, perhaps a symbol for the patriarchy. Translating the specific paradigm of her rage to a female or non-binary sexual partner wouldn’t quite work, and I do wonder what different dynamics would emerge if the ethnicities of the male partners were more variable in the videos. The use of the word ‘psycho’ in the title situates this video as an explicit response to the hetero-normative, misogynist ‘psycho girlfriend’ stereotype. The music video sees Max transform from the sexy submissive, serving dinner to her partner, to a Miss Havisham/Bride of Frankenstein-style figure chasing him down the stairs in a wedding dress. She features in a straitjacket before threatening the man with a large knife, possibly an empowering reclamation of the phallus that has (allegedly) wronged her. The other male victims who topple over each other in Max’s wardrobe constitute a clear inversion of the Bluebeard myth, with dead boyfriends in the closet instead of wives.

The song attracted criticism from UK mental health professionals, such as the Zero Suicide Alliance, on the grounds that it perpetuated negative and false stereotypes associating mental illness with violence. Poorly-judged ‘irreverent humour’ can indeed lead to further stigmatization, as Nicola Spelman, author of Popular Music and the Myths of Madness, indicates. David Metzer, in Alim Kheraj’s article ‘Why is popular music still obsessed with madness?’ offers an alternative viewpoint: that female artists such as Max are ‘protesting the expectations that have been placed upon them by flaunting that protest’.

This dimension is supported more strongly through the imagery in ‘Torn’ and ‘Who’s Laughing Now’, Max’s more recent singles. ‘Torn’ dabbles more in duality than craziness per se, invoking the nineteenth-century motif of the split hero, characteristic of classics such as Mary Shelley’s Frankenstein, or Robert Louis Stevenson’s The Strange Case of Dr Jekyll and Mr Hyde. This hero is usually male, whereas Max’s female heroine lives as a downtrodden, nerdy girlfriend and badass superhero, respectively. Halfway through the song, the superhero persona turns ‘nuts’, brandishing a stiletto heel and belt as weapons. Interestingly, the climax is the unfaithful boyfriend pushing Max off the top of a high building: attempted murder. An undefeated Max slaps him across the face in response. The message here is clear: despite the play with ideas of split personality and schizophrenia for the girlfriend figure, it is the lying man who is dangerously violent.

In ‘Who’s Laughing Now’, Max grasps the crazy image by the throat. She is straitjacketed in our first sighting of her in the video. Max channels the anti-psychiatry movement of the 1960s here, which railed against the institutionalisation of mentally unwell people, and questioned the validity of mental illness as a social and cultural category, conceptualising its diagnosis instead as a means of exercising oppression.

However, cross-editing images of Max writhing in a straitjacket and attacking her ex’s car with a large weapon somewhat undermines the accompanying lyric ‘Don’t ya know that I’m stronger?’. A glass wall separates her from the male psychiatrist later in the video, the one BIPOC man we see Max target across the three songs, but without the same romantic context and determinedly violent intent as aimed at her White exes/partners. She may smash the wall, perhaps a sister of the glass ceiling: however, he brands her as a ‘Psycho’ nonetheless, and she still ends up in ye olde asylum. The straitjacket remains.

Ankhi Mukherjee, in Aesthetic Hysteria: The Great Neurosis in Victorian Melodrama and Contemporary Fiction, charts the literary and dramatic representations of hysteria from the nineteenth century to the contemporary. She points to ‘a lasting cultural fascination with hysterical performance and play’, certainly applicable to Max’s aesthetic in these three music videos. Mukherjee’s question of whether the ‘female hysteric’ is a ‘madwoman or an actress?’ is demanding in the context of Max’s visuals. If Max aims only to be an actress, as the artist herself claims, deconstructively owning a glitzy aesthetic of madness for her own commercial success and the empowerment of gaslit women, then there is value in her employment of the madness motif.

She certainly succeeds in aligning whatever her persona actually represents, with sexiness. This is subversive in itself to some degree, when framed through Joan Busfield’s explanation of ‘mental illness’ in ‘The Female Malady? Men, Women and Madness in Nineteenth Century Britain’ [sic].

‘Madness, like its twentieth century counterpart mental illness […] is a concept which categorises some aspect of mental functioning – some thought, action, or behaviour – as abnormal, defective or disordered – that is, as undesirable’.

Max’s figures are definitely desirable. Whether or not she is mad, she taunts her male lovers with the uncomfortable truth that they want her, anyway:

‘You’re tellin’ me that I’m insane

But don’t tell me that you don’t love the pain’.

If her portrayal is edging closer to that of an actually mentally-ill person, on the other hand, the territory is far dodgier. To step away from preoccupation with the stylised madness images, there is another image in the ‘Sweet but Psycho’ video that is far more telling. Before the role play/murder/whatever festivities commence, Max’s persona sits in a bedroom strewn with her mussed clothes.

Being marooned hopelessly in a disordered living space is a classic symptom of clinical depression. Max is not exclusively Showalter’s Lucia, then: she is also, perhaps, the ‘sentimental crazy Jane or crazy Kate’, or maybe even ‘suicidal Ophelia’ – or something else, entirely. A contemporary young woman with depression.

Despite this reference to ‘genuine’ mental illness, the mocking of the straitjacket image corresponds to a dominant late twentieth-century idea that mental illnesses are more social than anything else, and might not even exist. I support Busfield’s view of mental illness, that:

‘notwithstanding the sociological claim that madness and mental illness are social constructs, we do not have to accept the view of 1960s ethnomethodologists and of 1980s postmodernists that they [mental illnesses] have no ontological reality’.

Max shows us who the really violent people are in ‘Torn’, and ‘Who’s Laughing Now’ – according to her, unfaithful men and male psychiatrists – to highlight gaslighting in heterosexual romantic relationships. This is still a necessary topic for contemporary intersectional feminism.

But suggesting that her personas are not ‘really’ unwell is perhaps an opportunity missed. Max seems a bit unsure about whether she is actually ill or not in her videos. Mentally unwell women, and yes, those undergoing psychiatric care, can be victims of abuse and gaslighting, too: in fact, they are possibly more likely to be so than mentally healthy women.

I’m not sure that suffocating a couple of interesting boundary-blurs about gender, mental illness, stereotyping and institutionalisation beneath the ‘crazy’ aesthetic is the way to go. Mental illnesses, in spite of their confusing mish-mash of cultural, situational and somatogenic factors, are, as Michael G. Kenny notes, ‘real […] though they are also a potent resource for metaphorical elaboration and obsessive/compulsive behavior’ [sic]. And they are disabling. They are not glamorous, and frustratingly cannot be changed like make-up can. Tossing symbols around and playing at being a superhero are fun, maybe empowering if you look at them under the right strobe lighting. We could do with more explicitly and proudly nuanced takes on what it means to be female and gaslit, or female and mentally ill, or both – taking into account further intersections – to sit beside or even top Max on the chart pedestal.