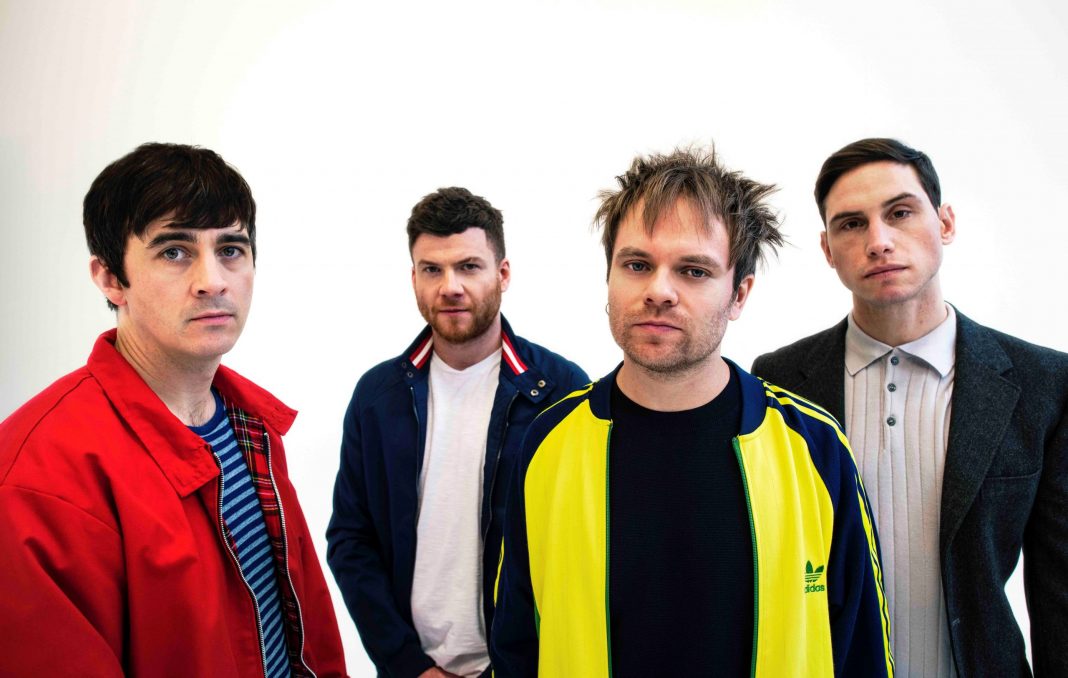 Born out of the early-2000s rock scene in the unsuspecting St. Albans, Enter Shikari have spent the best part of the last two decades taking the UK rock scene by storm. With their unique genre-bending sound and politically driven message, they are a constant on the lineups of major festivals – playing no less than five sets over the weekend at Reading & Leeds 2019.

The four-piece’s last record, The Spark (2017) set a precedent for high-concept rock music, an era that was as stylised and slick as it was gritty and unapologetic. As a band who are constantly in the business of outdoing themselves, Shikari announced that their sixth album, Nothing Is True & Everything Is Possible is set to release on 17th April 2020, calling it “the most definitive Shikari record to date”. Sharing a name with a novel by Peter Pomerantsev about the ‘surreal heart of the New Russia,’ the record is set to navigate the intrigues of the surface level yet uncover the darkness lying beneath in the very same way.

Ahead of the record’s release, I had the opportunity to chat with frontman Rou Reynolds. An outspoken advocate for mental wellbeing and social justice alike, Reynolds has been at the forefront of Shikari’s evolution from hard-hitting post-hardcore to genre-defying music with an authentic soul. We talked the morning after the late-night release of the second single from NIT&EIP, ‘Thē kĭñg’ – a track that he described as a “lesson in patience and forgiveness”, coated in a melodic and intricate electro-rock shell.

‘Thē kĭñg’ came a month after the release of the album’s lead single, ‘The Dreamer’s Hotel’. Both are equally stylised and classically Shikari, yet showcase their ability to jump seamlessly from one sound to another. “The theme of ‘The Dreamer’s Hotel’ came through quite early,” Rou told me. “The music and lyrics got developed at the same time which is quite different for us. The idea behind it was there, and the music came with it. It offered a juxtaposition between this idea of a ‘hotel’ – this place of peace and optimism and community, and then outside the hotel – the normal and furious world that we’ve come to know.”

“It was a case of matching that contrast with music. That’s why the verses are quite stark really, it was quite dramatically unharmonic for us. Normally harmony is so important to our music, but it’s just these lo-fi drums and horrible screeching,” Rou laughed. “We open the doors back up to the hotel with the more slick and melodic sound that really contrasts.”

This imagery is even more vivid still in the video for ‘The Dreamer’s Hotel,’ released just under a month after the song itself. Featuring technicolour effects and absurdist imagery alike, there’s an almost neo-Lynchian element to its execution. “The effects are something that just worked so well,” Rou told me. “We wanted to go for almost a 90s Britpop sort of style, but in a very analogue way. Almost all the effects were made with joysticks on little machines behind the camera – it was all very real and very old school, and made for a really fun experience.”

Beyond the two singles that have already been released, NIT&EIP is perhaps Shikari’s most experimental album thus far. Whilst they’ve never shied away from breaking down musical barriers, the new record signifies how effortlessly they do so.

Track 5, ‘modern living…’ is a seductive and swingy anthem with a carefully handcrafted flow, Reynolds citing “almost a grunge influence. It’s very slow-paced for us, and is really just a track taking the piss out of ourselves and the world that we live in. We’re going through political shock after political shock, and have got very much into that ‘it’s the end of the world and we’re all fucked!’ mindset.”

“It’s very easy to get into a pessimistic – almost nihilistic – way of thinking. We use the portmanteau ‘apocoholic’ to sum that up basically. I’ve very much felt like that myself, but sometimes it’s good to just step back and get some perspective, also just to use humour. It’s something central to what Shikari have always done, it really is a defence mechanism. It’s a way of saying ‘I’m not dead yet,’ showing fortitude, something that we’ve always enjoyed injecting into the music.”

Whilst much of the new record expresses similar feelings about the world in which we live, Shikari are no strangers to inventing fictitious worlds of their own within their music. Whilst they act as vivid caricatures of our turbulent society, tracks like ‘Revolt of the Atoms’ from their previous album are a welcome distraction and fascinating delve into Reynolds’ creative psyche.

Tracks 11 and 12 play such a role on NIT&EIP – ominously named ‘Marionettes (I. The Discovery of Strings)’, and ‘Marionettes (II. The Ascent)’. Talking of these and the band’s general love of the dystopian, Rou said “sometimes, I like going into quite self-indulgent ways of creating, and just using music to create a piece of fiction. Because of the ominous theme, it allows us to explore different styles of instrumentation. There’s all sorts on this one – it’s a proper journey, a strange sort of opera in a way.”

“The only difficult thing was trying to make it flow. The introduction is a sort of prickly and ominous, almost Radiohead-esque sounding thing, and then evolves into almost an homage to early house and rave culture. There are lots of points on the album where we’ve been inspired by rave culture actually – I think it’s something that’s quite important at the moment. We’re in a time that feels very similar to the late 80s, early 90s; the country is divided by a shift back to neoliberalism, and it’s taken such a grip. Rave was almost apolitical to start with, but with the rise of Margaret Thatcher and ‘society is dead,’ rave almost became the fight back, if you like. It became people longing for community as it was taken out of working life, especially with the death of the mining industry. It was a death of a way of living, and rave culture became a response to that. That’s why you can hear it throughout the album as a major influence, because of the real atmosphere that’s reminiscent of all that.”

This is indicative of just the type of band that Shikari are. Whilst they reliably produce punchy festival anthems, there is thought embedded into every inch of the creative process; the catchy tunes being made all the more wonderful knowing they’re crafted with power and intention. “It’s not something that we really ever chose,” Rou told me. “I grew up with lots of influences that kind of pushed us in this direction – to use the tool to explore and unite, it just feels quite natural.”

“I grew up on Motown and Northern soul; my dad was a DJ in that respect. After the death of MLK, that became quite a politicised scene. I was always part of the punk and hardcore scenes too, and that was just normality, the idea that music brings communities together. I couldn’t be running around on stage and putting all my energy and passion into something that didn’t feel worthy of my passion, y’know? It has to be an honest gesture of communal passion, otherwise I don’t really know why I’d be on stage, I’d probably prefer to be in an orchestra or something.”

“But then, as you said, using music by itself is something that’s quite important as well. On this album more so than anything we’ve done before, the use of music without overt lyrics to convey a message has been really prevalent. The most obvious case is ‘Elegy for Extinction,’ an instrumental piece that uses program form to convey the evolution of life on this planet. It starts off with a very sprightly section with brass, strings, and woodwind – trying to convey the birth of a new species. It goes onto the second part in a sort of march, which you can imagine as the branches of the evolutionary tree. Eventually it all comes to a rather dramatic and rather terrifying crescendo, trying to convey the anthropocene and the fact that we’ve lost 50% of our species – the fact we have all sorts of terrifying possibilities brought about by climate change and human influence.”

“The process of writing music like this has become quite important to me – as sometimes, especially in the last few years, there’s been a lot of political music. Often it can be quite banal and obvious, and I think we always try and not just settle for the ‘football chanting politics,’ y’know, where you’ve just got a mantra and are shoving it down people’s throats. We want to encourage people to think for themselves, and hopefully this comes across in the record.”

Whilst Shikari’s run of small venue UK dates in April has since been cancelled due to the outbreak of COVID-19, the band plan on announcing a full tour for late 2020. Commanding large and impressive venues is what they do best, their immersive set design and 4D ‘quadraphonic sound’ creating a live atmosphere like no other. “We’re actually starting to build the set today,” Rou told me. “We’re not actually playing any UK festivals this summer for the first time in our career because we’ll need the summer to rehearse and build the staging. It’s a lot of work but we can’t wait.”

“There’s just so much scope; there are so many different emotions conveyed on the album so we can really build on that live – build a world and an atmosphere to absorb you all in. I just can’t wait to be honest.”

Nothing Is True & Everything Is Possible is released worldwide on 17th April 2020.