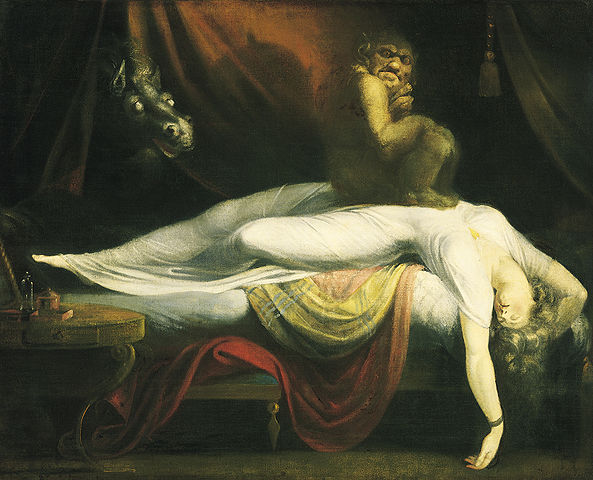 A typical depiction of sleep paralysis may be found in Henry Fuseli’s 1781 painting ‘The Nightmare’. A woman in a clingy white dress sprawls across the bed, like a puddle of melted vanilla ice cream; a hairy little hominid perched on her chest scowls directly at the viewer, while a demonic horse looks on with milky-eyed glee.

It is no longer 1781, so my sleep paralysis demon takes the form of my dental hygienist. Most nights, I spend at least part of the period between 2 and 5 am in a sweaty, muttering tussle with what appears, in the moment, to be Agata, the nice lady who does my scale and polish. ‘Sleep paralysis is when you cannot move or speak as you are waking up or falling asleep,’ explains the NHS website, blithely. ‘During sleep paralysis you may feel like someone is in your room; like something is pushing you down; frightened.’

‘Frightened.’ There it is, the last cursory little bullet point. ‘It can be scary, but it’s harmless and most people will only get it once or twice in their life.’

Given that the cure for the condition is basically ‘sleep better and be less anxious’- two things that have proved rather difficult in third year- I’ve become increasingly reliant on music in dealing with sleep paralysis. After a few experiences, sufferers can usually recognise when an episode is occurring; thus, I can remain relatively calm when Agata appears at my feet, brandishing a drill and decrying my receding gumline. Still, as you can imagine, ‘calm’ is very much relative in this scenario.

Since, per the NHS, ‘your muscles are in sleep mode but your brain is active’, an immense stress in a sleep paralysis episode is the illusion of having woken up. Your brain sends signals to open your eyes and get out of bed, then simulates the visuals for this process- all well and good until you actually get your eyes open, and realise you’re still drooling into a stuffed animal. In these moments- as an invisible force, which you know is imaginary but sure doesn’t feel that way, starts pulling you down the bed- you will wish for nothing more than a wake up call. Preferably a glass of water to the face. If that’s unavailable, I thought, why not music?

Noting that my episodes usually occurred around 3:45 am- based on the fact that I was awake and shivering in a pool of my own sweat by the stroke of 4- I experimented with setting a loud, cheerful song as an alarm around that time, hopefully freeing me from the realm of sleep, and from Agata’s clutches. ‘Everytime We Touch’ by Cascada seemed to fit the bill. Upbeat lyrics; an insistent drum beat; warm, fuzzy D flat major tonality. What better to banish the powers of darkness?

Anyone familiar with the cover art for the single may understand why this was a bad idea. Cascada’s vocalist seems to be receding into a cloud of noxious green gas; her face has received the kind of restrained and tasteful Photoshopping standard for 2006, resulting in glassy, bottle-green eyes, sandwiched between broom-sized lashes, that burn deep into the viewer’s soul. Unfortunately, it was through this song that I learned music is rarely powerful enough to wake up your body. It just gives your brain more to work with.

‘Everytime We Touch’ runs to about three and a half minutes, which in dream-time is an eternity. Or at least it is when you’re being plagued by visions of Natalie Horler- the 38 year old German lead singer of Cascada- performing a live accordion cover at the end of your bed while maintaining continuous eye contact. I have had many sleep paralysis experiences, variously involving a tiger; Niccolo Macchiavelli; a creepy local barista; and an invisible man whose face I could still feel under my fingers when I opened my eyes. None were as terrifying as Natalie Horler.

The experiment did prove that while music can’t always end an episode, it can certainly change the vibe. It turns out that my sleep paralysis demon responds really well to Shakira. The homoerotic ululations and chirpy ska beat of ‘Can’t Remember To Forget You’ made Agata considerably less threatening, and even seemed to add a bit of a swagger to her gait. (I avoided ‘She Wolf’ for obvious reasons, having a closet in my room.)

Music can also provide psychological reassurance after an episode ends. Silly brain, you think, peering around your dark, silent room as the clock hits 4:15 am. Imagining all that malarkey. A sentient black lump of pure evil rising out of your recycling bin. Ridiculous. But as the silence grows more deafening, and the pile of clothes on your chair looks increasingly hostile, music is equally instrumental in returning a sense of normality. I usually turn to something old and familiar like the Beatles, vigorously ushering in images of home and family to replace memories of the dentist’s waiting room.

Keble’s evening compline service includes the Latin hymn ‘Te Lucis Ante Terminum’. A prayer for protection during the night, its second verse runs: “From all ill dreams defend our sight, from fears and terrors of the night; Withhold from us our ghostly foe, That spot of sin we may not know.” I sing that line with a newfound enthusiasm these days.