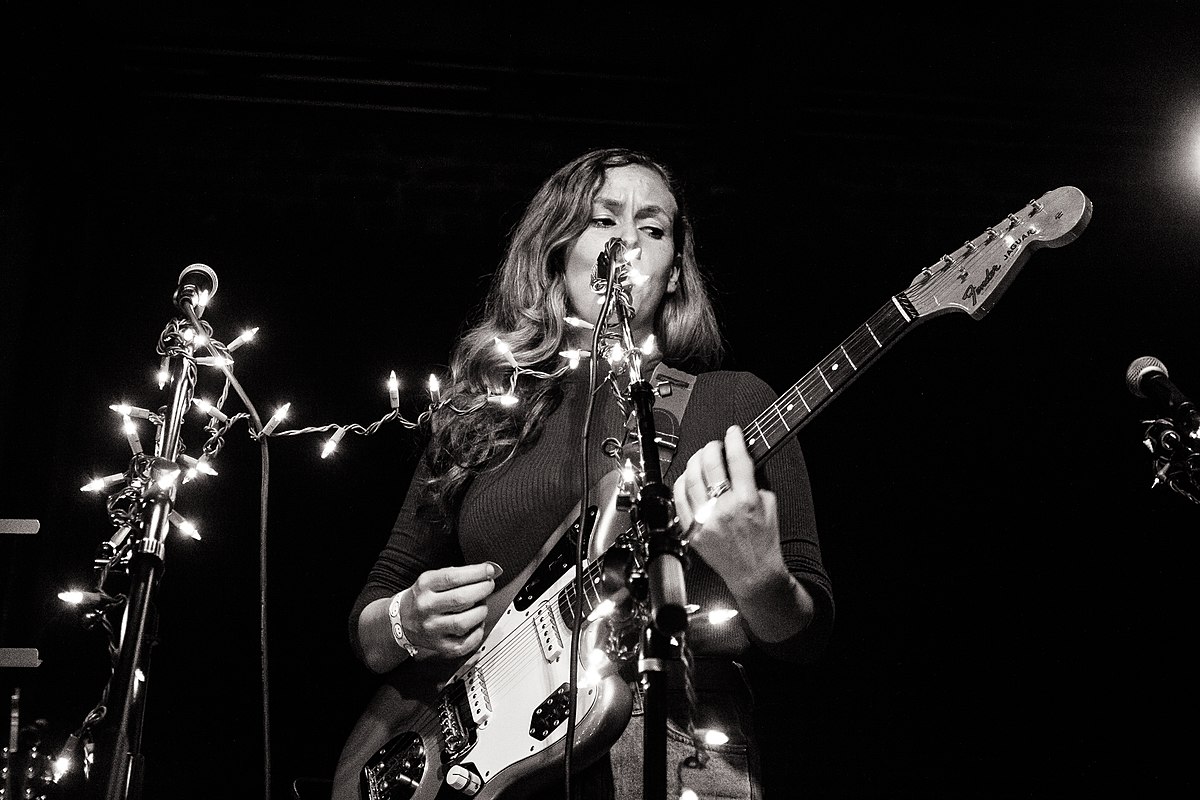 Greta Morgan – otherwise known as Springtime Carnivore – has made a name for herself as a touring member of indie rock band Vampire Weekend. Driven by dreamy-pop, psychedelia and punk rock alike, Morgan is a multi-instrumentalist whose talent speaks for itself. Hope Hopkinson chatted to Greta following the conclusion of Vampire Weekend’s Father of the Bride world tour and deserving Grammy win, to talk about all things music, touring, and elusive neighbours.

Across all the projects you’ve been involved with, it’s evident that your driving force is your passion. Could you tell me a little bit more about where this passion came from, and how you continue to inspire and motivate yourself to make music?
“Playing music and writing songs has always felt like part of the basic tapestry of daily living, as natural as making coffee in the morning or going for a walk in the afternoon. I began writing songs as a toddler and learned how to write sheet music before I learned the alphabet. Thankfully, my parents nurtured those early instincts. By the time I was 11, I had studied classical music but was ready to quit piano because I thought it wasn’t “cool” anymore, but then my parents divorced and I began writing songs as an emotional catharsis while I navigated that emotional transition. If my parents didn’t get divorced, I imagine I would’ve become a different type of writer: my teenage dream was to write books or become a journalist prior to that happening. Music is just the best way for me personally to alchemize an emotion and once I learned how to do that, I’ve never stopped.”

“I’m writing all the time, but the intention changes: sometimes I write for catharsis, sometimes for a cerebral challenge, sometimes it’s a means of collaborating or communicating with other people. Occasionally I write on commission for a commercial, film, or for another artist – at those times it feels more like a part time job because the assignment is super clear. But writing has always been there as an essential part of the day. I don’t have a specific writing mantra, but if I did it might be, “just keep swinging,” because I revisit song ideas over and over ‘til they take shape and often I just sit down to ‘open the channel’ and see what’s playing without any expectation.”

Throughout your career, you’ve been involved with a diverse array of projects. My favourite so far is the punk-meets-dreamy-pop cover album, Take it, it’s yours, that you released with Katy Goodman. Your arrangements of punk classics reinvented them as feeling both beautiful and current – what was the creative process behind this project like?

“Katy and I have always loved to play music together. She’s an unbelievable harmonizer because her voice has this pure, silky quality that blends perfectly with anyone. She and I were goofing around in my backyard singing the Misfits with a two-part harmony, and my elusive rock ‘n’ roll neighbor whom I call “The Shredder” (he shreds epic guitar solos but only for 15 minutes a day at sunset), called over the fence and said, “THAT IS BEAUTIFUL, LADIES!” We joked afterward, “What if we made a whole record of beautiful versions of punk songs? Wouldn’t that be funny?” but then realized it was a legitimate idea.”

You’ve been releasing music as Springtime Carnivore for the best part of a decade – with a gorgeous discography of sunshine-meets-psychedelia. Your music feels heavily detailed and authentic; a real labour of love. How has releasing this music been different to your other projects?

“Springtime Carnivore has more of my own fingerprints than any other project I’ve been part of, for better or for worse! There’s much beauty and joy in collaborating, but I feel like I can go deeper when I work in solitude and that’s how the Springtime Carnivore records were written.”

In 2018, you joined the touring line-up of Vampire Weekend. How did this opportunity come about? What’s been your experience so far of joining such a well-loved band on the road – how has the fan reception been, and what have been the highlights?

“Funny backstory here: Ezra Koenig (the singer of Vampire Weekend) and I found out in 2008 that we are third cousins through marriage. We learned of this through a Koenig family email chain which my grandmother Lynn (a distant Koenig), was a member of. Someone sent news of Ezra’s Spin magazine cover in 2008 to the email chain, and my grandmother responded saying, “My granddaughter is on tour with her band too!”.”

“Eventually Ezra and I met. I liked him immediately because he’s funny, brilliant, and has a unique perspective on pretty much everything. A decade went by and I continued releasing records and touring in my own projects. Around 2017, I began to occasionally accompany other singers on tour (Jenny Lewis, Jessica Pratt, etc.), and enjoyed the process of learning another artist’s back catalogue. My rule was that I’d only accompany someone from whom I had much to learn musically. When Rostam left the band and they were re-building the live lineup, Ezra invited me to join the group.  I was super excited, as I have loved all their records for years. And I was grateful I’d had those recent experiences of backing Jenny Lewis and Jessica Pratt because it prepared me for this. Amazingly, I joined the band the week before my grandmother died. I was able to tell her that, because of her insight, she had connected Ezra and I and we were about to travel the world together. It felt like a generational passing of the torch in a beautiful way.”

“When I joined the band, they basically said, “If you can learn 60 songs to start, that would be great. We’re going to play our first show in less than a month.” From there, I went into Vampire Weekend tunnel vision – I spent 8-9 hours a day learning the songs and memorizing lyrics with flash cards. At a certain point, I started dreaming medleys of their songs; it was total immersion.”

“Now it’s almost 2 years since I joined and the musical bond in the band is super strong.  Performing feels like second nature. We play 2.5 hours a night and keep a catalogue of 80+ songs of original material and covers fresh enough to take requests every evening. Before we started touring, we rehearsed for 6-8 hours 3-4 days a week for essentially 8 months. That feeling of musical and personal companionship is a joy for any musician to have. I’m always happy to have a break at home between tours to catch up on my own work and recover physically, but I always miss the guys!”

It’s been incredibly welcoming seeing your addition to the lineup, as well as Danielle Haim’s contributions to the latest VW record, Father of the Bride – shaking up the previously all-male outfit. How has being a woman in rock music shaped your experience, in Vampire Weekend and beyond?

“It’s hard to answer a question about being “a woman in rock music,” because I have no idea what the alternative is! It’s just my life, it’s always been my life. I love playing music with all genders of people and non-gendered people – music is for everyone!”

“The one thing I could directly respond to here is the fact that dozens of female Vampire Weekend fans have sent me messages saying that seeing a woman in their favorite band gave them hope and encouragement to pursue an instrument or a path in music. If me being “a woman in rock music” helped encourage these young women to follow their interests and their talent, then I don’t mind identifying that way.”

What’s next on the horizon? Can we expect to see new Springtime Carnivore music? Do you see your involvement with Vampire Weekend going beyond the stage and extending to the creative and recording processes?

“I’m working on a solo record which I’m deeply excited about. It’s been a joy to use my time off to incubate these new songs and I look forward to releasing some music in 2020 and a new record in 2021. I’m also working on a scripted project with a comedian friend, which has been incredibly fun because it’s an outlet for a different part of my personality than songs. The future with Vampire Weekend is yet-to-be-discovered, but I certainly have loved my time with them and would be game for more.”

What is Human Sciences?