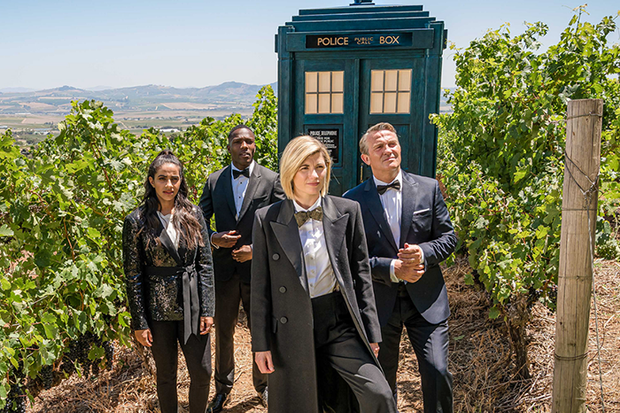 On New Year’s Day, exactly ten years after David Tennant’s beloved Tenth Doctor regenerated into Matt Smith, Doctor Who returned with the first instalment of its twelfth series since the 2005 comeback. The first part of the two-parter Spyfall is a fast-paced, at times light-hearted, at times terrifying tribute to 007, international espionage and your perennial invasion of Earth.

Despite the stakes, it’s a simple story. The Doctor (Jodie Whittaker) and friends are summoned by ‘C’ (Stephen Fry) to MI6, who’ve been oblivious to all the previous invasions of Earth and can’t work out who’s behind a string of attacks on agents across the globe. The Doctor suspects it’s something to do with Bromsgrove’s own cyber mogul Daniel Barton (Lenny Henry) and dumps Yaz (Mandip Gill) and Ryan (Tosin Cole) in Silicon Valley to do some hapless sleuthing. Meanwhile, the Doctor journeys to the Australian outback to catch up with old friend ‘O’ (Sacha Dhawan) before the team kick off the Twenties in style at Barton’s black tie bash.

Sinister Internet tycoons, the international assassination of spies and the Doctor on WhatsApp – it’s Doctor Who channelling the zeitgeist without it ever seeming forced. It says something about the attitude and confidence of  showrunner Chris Chibnall’s second series opener that Stephen Fry is dead within five minutes, and that the whole narrative hinges on a few lines of dialogue in the final seconds of the episode. The real triumph of Spyfall is its unexpected shattering of expectations, which force us to look at the whole episode in a totally new light, right when we least expect it.

The episode reminds us why Whittaker was picked for the job, her performance being the strongest aspect of her debut series, which was received with mixed reviews. She now owns the role, and rightfully defies keyboard misogynists when she reveals her “upgrade” to C. It’s good to see Yaz and Ryan doing a bit more, and you can’t imagine the whole thing working without crooner and star of The Chase, Bradley Walsh, who features as the wistful Graham O’Brien, now participating in an actual chase. It’s also the best Doctor Who has ever looked. It’s filmic, glamorous and colourful, lurching from a Sheffield basketball court to a London underpass, to MI6, San Francisco and the outback. This is Doctor Who for the 2020s.

I still hope that the Thirteenth Doctor is gifted some meatier dialogue over the coming weeks– some real ‘Doctor moments’. Whittaker’s Doctor is fun, but it’s important to be reminded that the Doctor is someone who has brought down civilizations, destroyed worlds and suffered unimaginable heartbreak. Whittaker is, after all, the successor to Peter Capaldi, whose Doctor was locked in a permanent existential/midlife crisis and once spent a whole incredible episode talking to himself (2015’s Heaven Sent). Thirteen’s four  twenty-first century Doctor Who were all successful because we feared them just as much as we wanted to hang out with them. Spyfall’s cliffhanger changes everything and might represent a golden opportunity for a totally new, more intriguing side  of the Thirteenth Doctor to see the light of day.

This is a Doctor who hasn’t yet dwelled on her past, but she’ll now have to confront some home truths. Her friends will surely get caught in the crossfire. As refreshing as it’s been to enjoy more straightforwardly pally companions like Bill Potts, Graham, Yaz and Ryan (after tempestuous friendships between the Eleventh Doctor and Amy Pond and between the Twelfth and Clara Oswald), I hope we’ll learn more about the relationships between the Doctor and her friends, and see them tested too.

It seems that the Thirteenth Doctor won’t be entirely exempt from the dramatic plot arcs that characterised the Smith and Capaldi years – and that’s not a bad thing. After all, Series 12 begins with rather a lot riding on it. Chibnall’s inaugural series came in for a lukewarm reception and the absence of an overarching narrative arc was singled out as a major flaw.

While many diehard fans bemoaned the lack of complex narrative, there are plenty of more casual viewers who say the show hasn’t been entirely the same for a whole ten years, ever since head writer Steven Moffat (of Sherlock fame) took over from Russell T Davies back in 2010. The Moffat era faced accusations of being too complicated, too clever and too timey-wimey, like Sherlock but with Daleks. If the Davies era made us believe aliens might march into the house at any minute, Moffat’s Doctor Who was more like fantasy: a cosmic, poetic and angsty exploration of identity that liked to completely blindside us. Ten years after flatulent green monsters infiltrated Downing Street in 2005’s Aliens of London, the Twelfth Doctor, in that staggering one-hander, spent 4.5 billion years trapped inside his own last will and testament with some flies. Clearly, the show has changed a lot over fifteen years, but Chibnall has learnt some lessons and Spyfall, I think, embodies the best of Doctor Who.

Indeed, the episode charts a middle road. It’s uncomplicated, but masterful, offering a nuanced understanding of the impact of Tardis travel on home life. And it throws up some tantalising questions that remain, for now,  unanswered.The Doctor has been issued a stark warning: ‘everything you think you know is a lie’. What does it mean? Will the invasion be thwarted? And, in true cliffhanger fashion, how will they get out of this one? It’s a winning formula, and I hope Series 12 keeps it up. Above all, Spyfall is fun – and perhaps that’s what’s most important. At fifty-six, the Doctor’s prognosis is looking good.