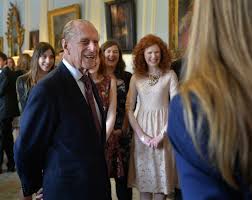 For a man who once helped his friend try to beat up a journalist, calling a December election was in retrospect a rare act of kindness from Boris Johnson. Normally Christmas is a time for violently falling out with extended family, but anecdotally, it seems everyone was too shattered to do the ‘politics conversation’ this year.

And no wonder. Whether you were traumatised or elated by Johnson’s victory, we are all united in our political fatigue. Whilst we might like to think that the defining photo of 2019 was Greta’s beaming cherub face on her zero-emissions sailboat, a more accurate representation would be a desiccated Prince Phillip leaving hospital. For the first time in 98 years of trying, His Royal Highness perfectly captured the mood of his nation – one exhausted by a decade of political shithousery.

In the distant future, historians who want to know how people were feeling at the end of 2019 need only look at this photo. If you look very closely at Phillip’s sunken eyes you’d be forgiven for thinking you were looking in a mirror; putting your ear up to the screen, you’d hear a whole nation craving the sweet release of their own state funerals.

The election was in a sense a fitting end to the 2010s, the shattering full stop which the decade truly deserved. If you woke up on December 13th with a nasty case of déjà-Bullingdon, perhaps a reminder is needed that Boris Johnson, David Cameron and George Osborne were all Buller men during their time at Oxford. Whilst the dining club may currently be going through a bit of an image crisis, former members presided over the country for six and a half of the last available ten years.

In fact, this truly was the decade in which Oxford saw the worst of its chickens come home to roost. As a university, we currently seem to be on the sharp end of a particularly vicious phase of karmic retribution, making you wonder what really went on in Oxford during the late 1980s.

Did the Vice Chancellor host tea parties for notorious sex criminals? Offer fellowships to neo-Nazis? Whatever went down, it must have been truly horrific for the universe to decide that PMs Cameron and Johnson would be Oxford’s most significant contribution of the 2010s. Karma really is a bitch.

The current university powers that be must be hoping for an abrupt career change from Greta, crossing their fingers that she wakes up one day realising that Politics, Philosophy and Economics at Christchurch is her real calling, rather than saving us all from death by forest fire. The alumni posters need a serious facelift, and Johnson’s gormless grin clearly isn’t going to cut it.

His chief adviser however, has clearly got the memo that Oxford doesn’t always know best when it comes to politics. Earlier this week, anyone who has ever based elements of their personality around On the Road felt their ears burning when Dominic Cummings called for more “weirdos and misfits” to apply for jobs in Number 10.

In just 3000 words, Cummings made it clear that when it came to his new personal assistant, he didn’t want “more Oxbridge English graduates who chat about [French psychoanalyst Jacques] Lacan at dinner parties”. Why he felt the need to single me out in public is unclear.

Cummings’ rambling word soup of a blog post essentially describes Effy Stonem from Skins. If you cast your mind back to when we thought Nick Clegg (the manic pixie dream girl of the 2010 Election) might be our salvation, you really begin to see how far we’ve come in just ten short years.

Sadly, the successful applicant may not be around long enough to save us from the most terrifying political prospect of 2020: more of Cummings’ blogs. Sounding a lot like Oxford’s own admissions guidelines, he writes: “I’ll bin you within weeks if you don’t fit — don’t complain later because I made it clear now.”

It is easy to make fun of Cummings and his kaleidoscope prose, but he and his team hold the keys to Downing Street once again. The toxic whirlwind of political life since the EU referendum in 2016 has swept his self-righteous brand of politics to power.

It is important though to put our recent period of political what-the-fuckery in a wider context. This is the decade that gave us Donald Trump, Jair Bolsonaro, Rodrigo Duterte. Everywhere you look populist Poundland despots are springing up, like a nightmarish version of whack-a-mole if the moles had nuclear weapons.

I suppose we should be grateful that, ever the shrinking violet, we as a nation did our societal collapse a little more quietly than some. Half-heartedly voting to leave an international bloc looks rather tame as a national crisis when set against some of the other examples we see around the world.

Still, we go into the 2020s a more frightened and angry country than we were at the start of the decade. What Johnson and Cummings have planned for us next is anyone’s bet. Based on the photo, my guess is that Prince Phillip won’t be around to see much of it, fortunately, or unfortunately, based on your disposition. I have a sinking feeling many would like to join him in that.