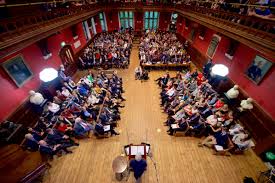 I won’t waste words discussing the ins and outs of what has happened with the Union this week, mainly because if you’re reading this you probably already know. But also: I don’t want to waste many words on students who are, quite frankly, in my opinion, some of the worst this university has to offer.

Usually, the abhorrent actions of the Union are kept within Oxford and its student papers comment and report on them, but this time: The Times and Sunday Times, The Telegraph, Daily Mail, The Guardian and The Sun picked it up.

Suddenly the actions of a minority of insipid Union committee members became national news, reflecting badly on the whole university and the people in it. Not only has Brendan McGrath – quite rightly – resigned, but with him has gone most of his committee. Not being a Union hack, or even a member, I have never paid much attention to the seemingly arbitrary self-aggrandising roles these students occupy.

All I know and have felt since coming to Oxford is that the Union is not for everyone, despite what it tries to convey. It’s expensive, and even the membership for us ‘disadvantaged’ students is a lot of money when you know how much food that £169.95 could buy, or where it could be better spent. The whole concept of the Oxford Union is an outdated one.

My problem here, however, is the fake sense of caring that the resigning committee members have shown this week. Once the national press got involved, they scarpered. Thinking more about their LinkedIn profiles and whether they could get that SPAD job they’d hoped for, rather than the fact that Ebenezer Azamati – a blind postgraduate student – was forcibly removed from the building, a charge of violent misconduct brought against him, and his membership revoked.

Why didn’t McGrath’s committee resign then? Because there was no need to, and whilst McGrath was safe, so were they. But now?

We are witnessing rats leaving a sinking ship. Scheming for their next move within the Union, forming their slates and pretending they are the worthy ones, the one who chooses to stand against the injustice…six weeks after it all happened.

The Union stands on its own from the University, allegedly – but if so, then why are students so encouraged to give hundreds of pounds away to it, and why does its stall stand so prominently at the University-affiliated freshers fair, where many students will hear about it for the first time, given pens, memory sticks, beer mats or whatever crap the Union is giving out? Unfortunately, the Oxford Union and Oxford University are not distinguished as separate things. When events like these happen in the Union, it reflects on the university.

It’s important to remember that the premise of the Union is actively against inclusion, even in the fact that Union presidents suspend studies for the year; most people couldn’t afford to do this unless they truly had to.

Harry Hatwell, the student who brought forward the motion to impeach McGrath, has announced he is “writing to the Vice-Chancellor, Professor Louise Richardson, asking her to formally end all links between the Union and the University.” A move I support. We cannot continue to allow the Union to behave as it does: either the University takes some proper control over the Union, or breaks every tie with it – although they claim to have none – to show real action.

To all the people not at Oxford or who haven’t studied or taught here – which is, you know, the vast majority of people in the world – the Oxford Union is mistaken as what every other university has in a student union.

It’s probably the most ostentatiously Oxbridge thing that our student unions and whatever this eg–boosting union is, are separate things entirely. As if Oxford wasn’t bloated on its privilege enough already.

The Student Union and the Oxford Union could not be further apart in nature and activity. However, it is the latter that commands the most attention whilst the former does more actual good for Oxford. The events that have taken place within the Union this term are a consequence of what happens when students are allowed to pretend to be politicians.

‘Impeachment’, ‘resignation’, ‘standing for election’ – these are not the words that should be used for a student society, and remember that is all the Union is, despite its lavish pretentious facade.

The Union must be made accountable: we need to hold them to account. This sort of nonsense just cannot carry on. Otherwise: we are looking at our next load of Johnsons, Goves, Camerons, and Osbournes.