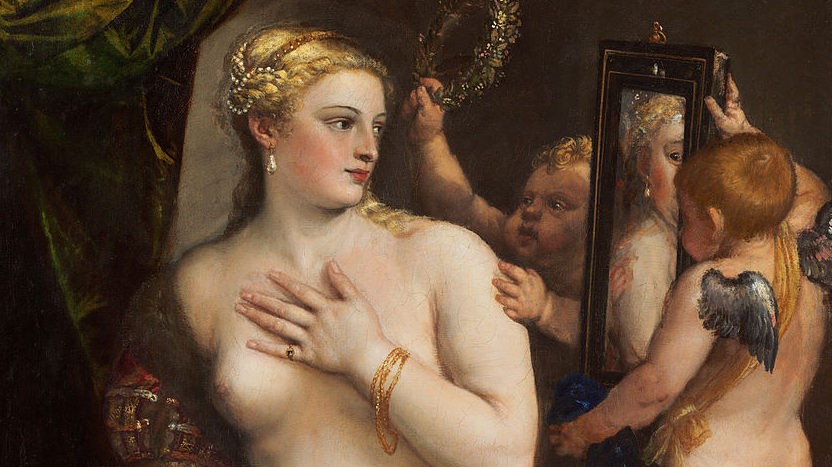 The Victorian period was one defined by immense social change – especially in regards to women’s position in society. Throughout the century, increasing debate led to the reconsideration of attitudes towards women’s employment, marriage and sexuality, and this large-scale reassessment was increasingly explored by the pre-Raphaelite Brotherhood, whose art focussed heavily on the idealised female form.

While most people are familiar with the typical pre-Raphaelite motifs – such as the flowing red hair and elongated, delicate features – a familiarisation with a number of their paintings will highlight recurring symbols: female passivity, when present, often exists alongside mirrors (which regularly symbolise the inaccessible and the forbidden).

An example of this specific motif is in Holman Hunt’s depiction of the Lady of Shalott (based on Tennyson’s 1832 poem). In the painting, the Lady is depicted immediately after the mirror “crack’d from side to side” and the curse has come upon her. The viewer’s eye, despite being distracted by a mess of coloured, floating wool and a fantastical fresco on the walls, is guided towards the mirror in the background; reflecting the unseen half of the room, the presence of a Knight can be made out from behind a column.

Originally, in the poem, the mirror is the Lady’s only point of access to the outside world, as it allows her to look outside indirectly, preventing her from breaking her curse. However, this is not the case in Holman Hunt’s painting, as he captures the moment in which the mirror becomes vitally corrupting, for the sight of the Knight through it spurs the Lady to turn and look towards Camelot, instantaneously bringing about her subsequent demise. The pre-Raphaelite interpretation of the poem is one which focuses on the mirror solely as a symbol of the Lady’s simultaneous isolation as well as the cause of her death. The presence of the mirror in this crucial moment reminds the reader of the Lady’s involvement in her death, and surely implies slight condemnation on the painter’s part, as he seems keen to remind us of her culpability, implying blame for her naïvety.

Female isolation is equally present in Dante Rossetti’s Lady Lillith, a painting which focuses on a woman combing her flowing, red hair (in true pre-Raphaelite style), holding a hand-held mirror. Clearly idealised, with her dress slipping below her shoulder and with deep red lips, the viewer is initially led to appreciate the sitter aesthetically. Despite her beauty, however, she is distant; while the viewer looks on at her, she is absorbed in her own reflection. This sense of ignorance is emphasised by the presence of the mirror in the top left of the painting, which demonstrates another dimension that she is not tending to.

However, this seemingly vain admiration adopts a dark significance when read alongside an inscription which Rossetti inscribed below a later watercolour copy: “When she twines them [her locks] round a young man’s neck, she will not ever set him free again”. Having read this inscription, the woman is transfigured: she is not simply admiring her hair, but actually her means of physical control over men. Although there is an initial sense of contempt for Lillith’s vanity, her dominance over men distinctly empowers her. Moreover, her explicit enjoyment of her own power surely inspires admiration in the viewer; Lillith is empowered by her reflection, for the mirror allows her to become aware of both her superficial beauty as well as the power which her hair affords her.

One shouldn’t be too quick to label this motif as being solely reductive, as it is arguably so in The Lady of Shalott. In fact, the motif is also used in a way which evokes quite the opposite meaning; this is no more so than in The Awakening Conscience, Holman Hunt’s 1853 painting, a personal favourite of mine. In the painting, a young couple is sat in front of a piano, with the woman (who is a ‘fallen woman’ – she is not wearing a wedding ring) slowly rising from her lover’s knee. Her movement towards the pair of open, glass doors seen in the mirror behind her is not symbolic of repression or inescapability. Rather, it is used to give the woman freedom, as consciously seeks redemption for her sin. In this painting, the motif is entirely empowering, as it presents the opportunity for salvation for the female muse, especially at a time in which women were condemned for sexual behaviour much more harshly their male counterparts. With her back to the mirror, as well as her lover, the viewer is able to understand that the subject is shunning her former sin; the mirror’s sun-lit visage, depicting a spring scene outside, affords the viewer with a glimpse at what she sees. In distinct contrast to the mirror in The Lady of Shalott, the mirror in this painting is used to demonstrate the woman’s opportunity for redemption and revitalisation through the ‘awakening’ of her conscience and rejection of her old lifestyle. Despite being masked by shade, the corner of light in the bottom right of the painting represents the opportunity which the subject is moving towards, and will imminently arrive at. In a notable reversal, while in The Lady of Shalott, the Lady’s turning away from the mirror causes her demise, the mirror can also symbolise redemption, as it does here, for it allows reveals to the viewer the woman’s ability to access forgiveness.

The motif of mirrors might demonstrate the brotherhood’s reductive attitudes towards women: in The Lady of Shalott, for example, the window not only oppresses the subject through showing her the unreachable but also leads to her causing her own death, which is implicitly scorned by the artist. However, although the mirror in Rossetti’s Lady Lillith is partially used to highlight (as well as condemn) the subject’s vanity, it simultaneously empowers her, as it allows her to admire her means of power over men.

Even more empowering is the mirror in The Awakening Conscience, which is demonstrative of redemption for the ‘fallen woman’, especially in a period where women faced significant resentment for their sexual autonomy. While no decisive conclusion can be drawn from exploring this specific motif, one can begin to understand the brotherhood’s complex relations with their female muses. The existence of the motif itself – and its sole association with women – illuminates the varied contemporary attitudes and allows us to understand the extent to which women in the 19th-century were continually reduced to objects of artistic symbolism.