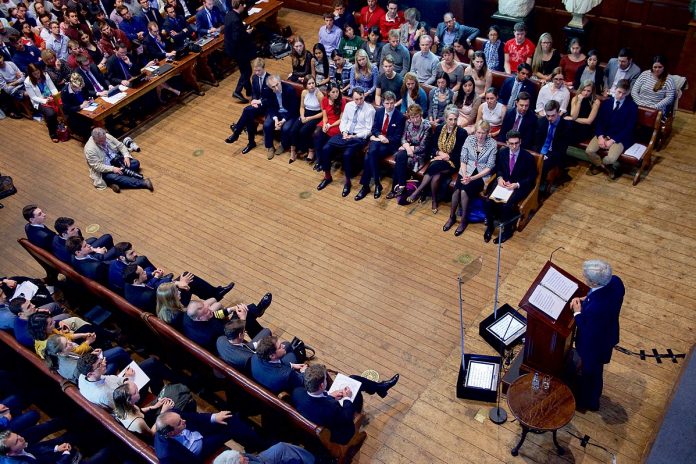 Those with disabilities and from socioeconomically disadvantaged backgrounds gave the Oxford Union the lowest accessibility ratings in the society’s access report, seen by Cherwell, which was internally published last week.

The internal survey was completed by over 600 members, with 166 of them opting to answer questions concerning the accessibility of the Union for minority groups.

While nearly 67% of members who completed the survey said that the initial membership fee was one of the largest factors preventing people from joining the Union, 34% said that the atmosphere of the Union was responsible, while 33% also blamed its reputation.

The lowest ratings were relating to members who choose to answer questions regarding accessibility for those who “identify as coming from a socioeconomically disadvantaged background” and for “disabled members”.

Members who chose to answer questions relating to members who “identify as coming from a socioeconomically disadvantaged background” gave the Union an average of 3.5, with written feedback suggesting that the initial membership fee was a key reason for them feeling excluded.

Meanwhile, those who chose to answer questions regarding access for “disabled members” gave the Union an average score of 4 out of 10, citing queuing for events, heavy doors, and the first floor women’s toilets as amongst the areas of greatest concern.

Those who answered questions concerning access for “ethnic minority members” gave the Union an average rating of just under 6 out of 10, while members who chose to answer questions concerning access for LGBTQ+ members gave the Union an average accessibility rating of 6.5. Many of the respondents expressed concern over the opinions held by many speakers, as well as a lack of LGBTQ+ events.

International student gave the Union the highest access rating of 7.8 out of 10.

Membership fees, accessibility, and transparency were highlighted as the areas of greatest areas of concern, with 48.4% deeming the transparency of the Union for its members ‘inadequate’ by giving it a rating of less than 5.

The Union did not respond to a request for comment.

The report comes in a week where questions were raised by committee members over step free access at the new Plush venue. Minutes from Union’s Access Committee meeting on Friday suggested that the committee were uncertain about the possibility of installing step free access in the Union’s ‘coal-shed’, the former Purple Turtle venue, which the LGBTQ+ club is set to occupy from early January.

The minutes read: “The President-elect acknowledges that this is an issue with which he wants to deal as we have a responsibility to solve this problem.

“The Bursar notes that Plush did have excellent nights for people with disabilities. She says that she does not know how it will be possible to sustain such nights in a cellar and that we are very constrained in terms of what we can do to solve the accessibility problem.”

The President-elect at the time and the Bursar agreed that they would discuss the possibility of step free access with Plush once negotiations had been completed.

Malala Yousafzai at the Oxford Union