Combining Nazis with zombies is not exactly a novel idea at this point, but Overlord brings the concept to the big screen in ways that will have you laughing one minute and peeking between your fingers the next.

The story follows a plucky team of American soldiers who go behind enemy lines in France to destroy a Nazi radio tower. Stakes are immediately set at maximum as D-day’s success hinges on their mission, which is quickly complicated by the discovery of secret Nazi experiments that turn local inhabitants into zombies in a grisly laboratory under the village’s Church.

This tension is never lost for a moment. A nail-biting sequence opens the film, as the team are packed like sardines in their transport plane that is being destroyed around them. Viewers are so submerged you feel like you’re trapped with them, plummeting out of the sky and straight into hell. Director Julius Avery has created a well-paced film that lives up to its dramatic opening and will keep you on the edge of you seat for the whole runtime. Even more generic tropes like jump scares are used with careful economy, so they genuinely take you by surprise.

The soldiers’ ability to retain their sense of humour despite the horrific revelations of the Nazi’s perverse experiments, renders Overlord as much a war film as a horror flick, as it captures the natural human response when faced with terror. The majority of the humour is dark so that at no point does Overlord dip into becoming a full comedy-horror movie, but the inclusion of this levity renders it a genuinely enjoyable watch.

Jovan Adepo makes a likable protagonist as Private Boyce and acts as the moral centre throughout the film. His commanding Officer Corporeal Ford (Wyatt Russel) determines that the only way for the team to succeed is to be as depraved as the Nazis, a status he achieves with ease when he proves himself a dab hand at torturing a German officer in sequences of seat-gripping horror. Overlord raises important moral questions about how far you can go to deal with an evil, before becoming that same evil yourself.

At times it feels like Ed is wearing invisible armour gifted by the screenwriter, as he manages to sneak in and out of the Nazi’s compound whilst sentries watch, and escape situations of overwhelming peril in fantastically unlikely fashion. No matter how many times he is body slammed against a wall, our indomitable hero jumps right back up for more. But rather than have you rolling your eyes when the film stretches the bounds of believability to breaking point, scenes like these feel deliberately funny.

Horror fans will not be disappointed by the amount of violence and gore that Overlord has to offer. I’d advise viewing on an empty stomach. Convincing zombie makeup, impalings accompanied with grisly sound effects of metal tearing flesh and bones puncturing skin will have you grimacing in your seat, especially if like me you’re not a regular viewer of horror movies. Overlord’s premise may not be unique but it approaches the genre with a fresh perspective and entertains its audience in a way that many horror movies fail to do. 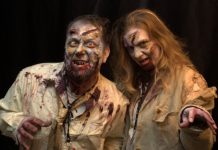