Trinity second years have been threatened with a collective fine, after college staff were “appalled” by their behaviour at halfway hall.

It is understood that various students smashed glasses and were generally rowdy, to the extent that catering staff expressed their discomfort.

In an email sent to Trinity students and seen by Cherwell, the college dean, James McDougall, detailed his disgust at the actions of second years.

He told students: “However entitled you may feel about yourselves, there is absolutely no excuse for this behaviour.”

McDougall went on to request everyone who was at the dinner attend a meeting with the college president, Dame Hilary Boulding, and himself later that week.

He warned students that he expected to “impose a fine collectively on everyone who was there, in addition to costs for breakages and a reparatory bonus to the staff who were on duty.”

However, no fine was imposed at this meeting. It is unclear whether a fine will now be issued, or what the sum may be.

The president and dean of Trinity did not respond to a request for comment.

This is not the first time the Trinity second year group has made the headlines for rowdiness.

In 2016, when they were freshers, the cohort were asked to make a charitable donation of ten pounds to account for their “disgraceful behaviour” at their matriculation ceremony.

In an email addressed to all undergraduate freshers, the dean at the time, Professor Jonathan Mallinson, condemned the actions of the freshers, whom he claimed behaved in a “noisy and undignified manner”, which he also described as “neither appropriate, clever nor funny”.

Freshers reportedly sang ‘We Will Rock You’, ‘Wonderwall’ and chanted “what do we think of Merton?” at other colleges’ students inside the Sheldonian. One Trinity first-year told Cherwell that “this was interspersed with Mexican waves and lots of stamping”. 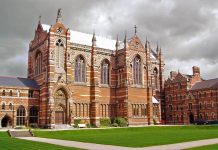