Ellen Peirson-Hagger looks under the shell of The Lovely Eggs 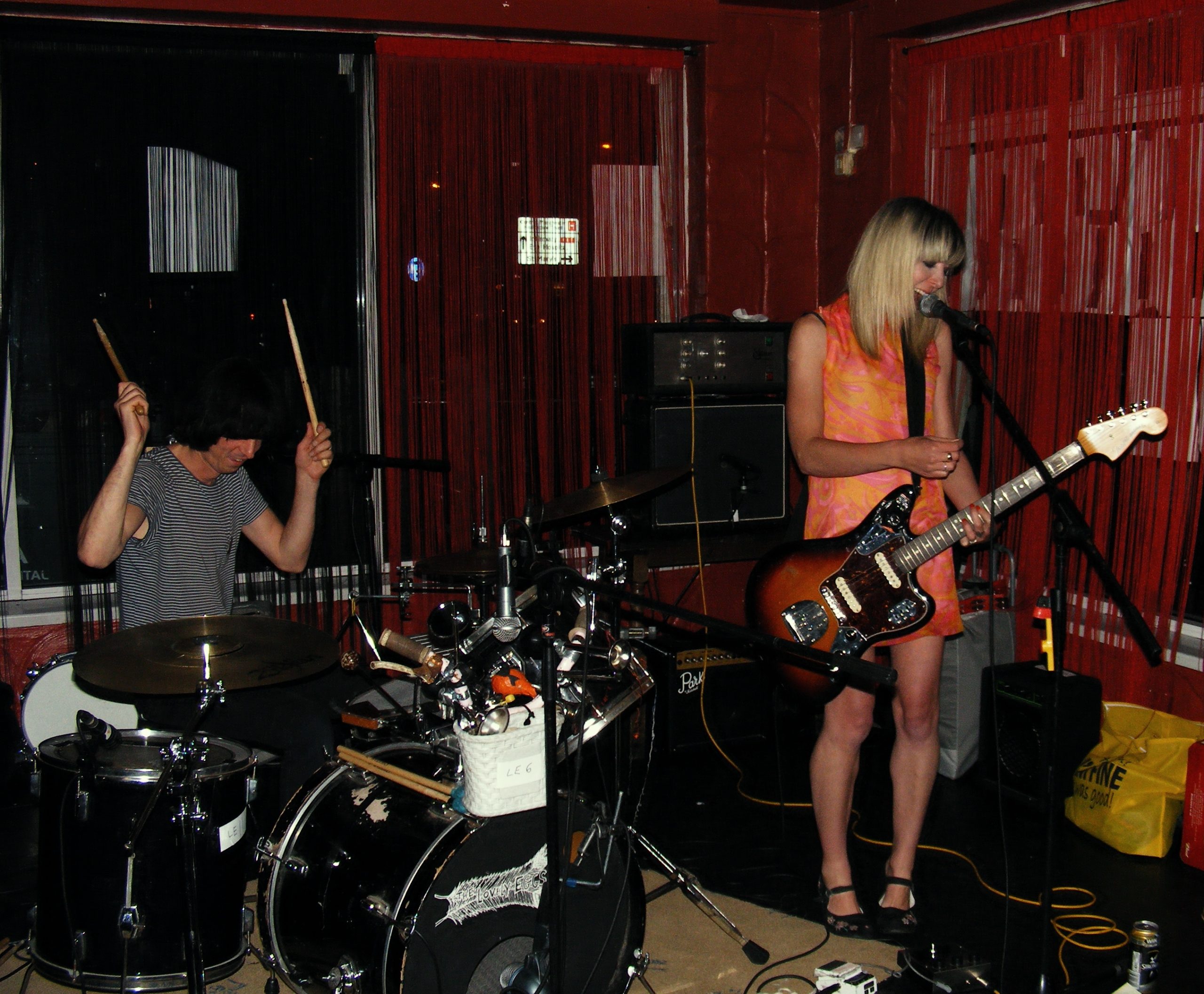 The Lovely Eggs have some great stories to tell. They’re on tour, they say, because they  have a three-year-old son and can’t go to parties anymore. But getting a set list together and driving up and down the country playing shows every night means getting away from their hometown of Lancaster. They get to drink every night, and party every night, even if they’ll be woken up at 6.30am by their son, whom they’ve brought with them. “That’s when I regret the last can”, Holly Ross, guitarist and lead vocalist, says, downing her Strongbow.

The married pair bring the thrill of an escape from domesticity to a Monday night at Cellar. It’s all a bit ramshackle, with drummer David Blackwell shuffling onstage with his 60s beatnik haircut hiding his eyes and a bag still slung over his shoulder. He plops himself down on his drum stool and suddenly Holly lets rip a guitar thrash. It’s a sudden punkish slam which no-one sees coming from the gawkish looking couple who slumped onto the stage looking as if they were just sound-checking.

The thrill of the Lovely Eggs is this disjointedness. They have thick, homely Lancaster accents and, when cheerily chatting onstage, seem like just the type of people you’d chat with in the pub. But when they start singing, you wonder if you could even follow the conversation. They sing things like “Peel back everything you’ve got for the magic onion” in ‘Magic Onion’, released on green “splatter” vinyl as a 7” in April last year, or “We were goof-goof-goof-goof-goofing around” from ‘Goofi ng Around (in Lancashire)’, released on 7” “egg” vinyl last November. The band are notoriously ‘DIY’ and, via Egg Records, have released some of the maddest looking indie records of the last few years. I was very nearly persuaded to part with a reasonable £12 for a scarf emblazoned with “FUCK IT” from the merch stall on my way out.

Fan favourite ‘Don’t Look at Me (I Don’t Like It)’ hears Holly shrieking “Look at him with his dog dirt smile … Look at her with her cul-de-sac arms”, as she works her way through numerous ridiculous but gleefully impossible phrases. When the stabs of noise stop, the lyrical climax is Holly’s lone voice saying, quite frankly, “Don’t look at him, cause everyone knows he’s got a sausage roll thumb”.

The best thing is that the audience, crammed into the low-ceilinged venue, are prepared for this nonsensical mayhem. Most seem like regular Eggs fans, the type who buy every limited edition recording. This crowd is familiar with these absurdities, and any reaction is just cheerful agreement. Of course this woman has a “washing line smile”. It all becomes quite normal.

Holly introduces ‘Fuck It’ as “the national anthem of Lancaster and Morecambe District”. Considering the less than polite lyrics, it is just fitting that the song begins with the softest melody we hear all night. Holly strums out a sweet little riff underneath a delicately-voiced “Fuck it, oh yeah-ah-ah-ah-ah”, meandering up and down the scale with a soft, tuneful voice we rarely hear in amongst raucous shouting or rhythmic speaking.

‘I Shouldn’t Have Said That’ hears Holly scream, full-pelt into the microphone, alongside churning drums and guitar, galloping underneath a fiery wrath of a lead singer caught up in the midst of an argument, or something.

Because surprisingly pleasing is the very little we find out about these in-song situations. What shouldn’t Holly have said “right into your face”? And what is ‘Drug Braggin’’, a phrase we only hear over Wurlitzer-like guitar sounds, all spinny and distorted, punctuated with cymbal crashes?

The fact is, it doesn’t really matter. There is never any need for explanation of the band’s surreal observational lyrics. They don’t expect quiet contemplation or deep interpretation, and the crowd are too content grinning along, pints in hand, to worry about anything more than their sheer amusement. And the Lovely Eggs are more than amusing.