“We didn’t do Blackface, but you could argue that we did”: Mathew Baynton on Horrible Histories, type-casting, and his acting career 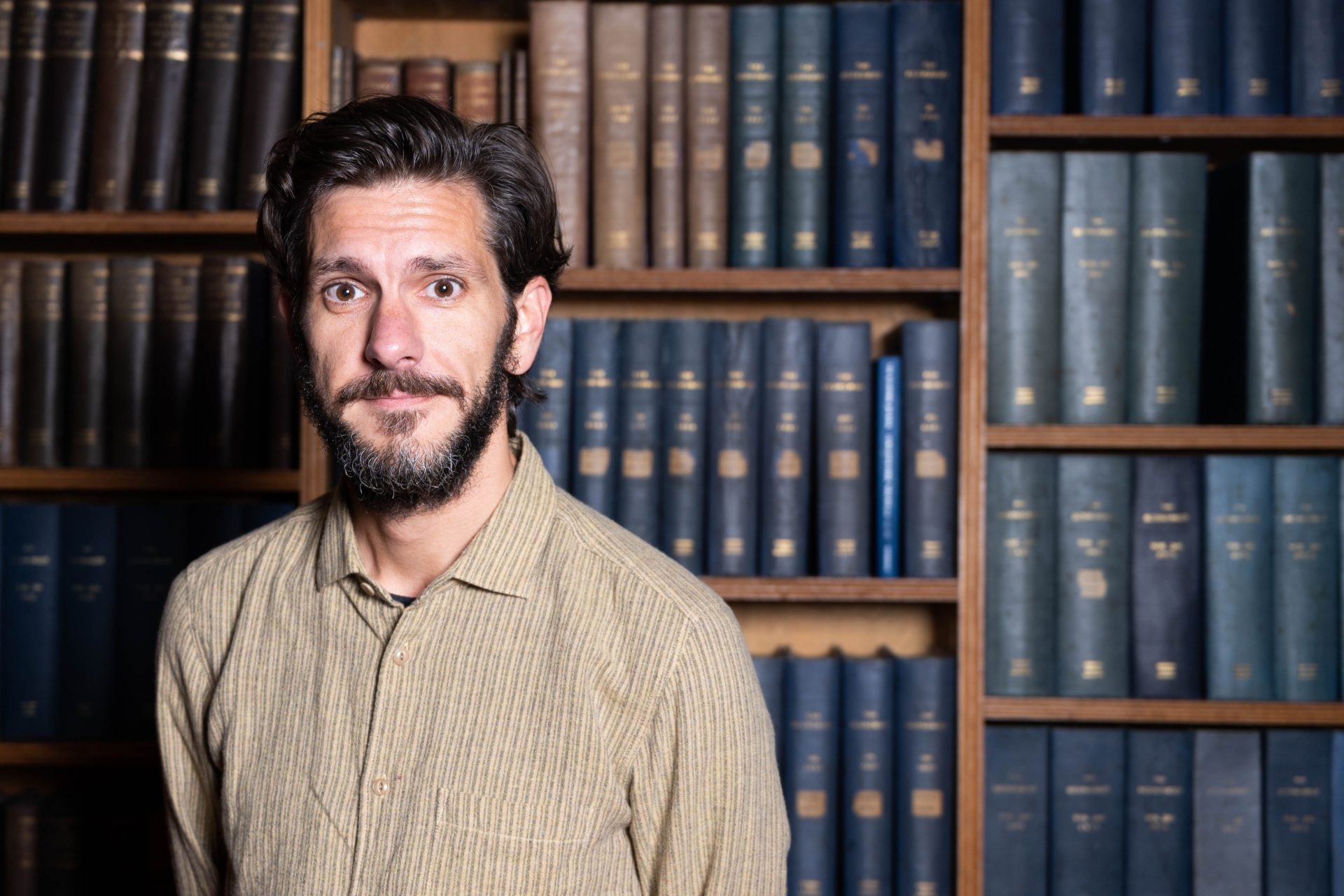 On November 23rd, Mathew Baynton visited the Oxford Union. There was a frenzy of excitement around his attendance, with members queuing from 5:30pm to attend his 8pm talk. Baynton would go on to address a chamber filled to the maximum capacity, a feat only achieved by one other Union speaker this term: Malala. Before his Q&A with Charlie Mackintosh, he sat down with Cherwell to discuss his life and career.

Whilst Baynton may not be an A-list celebrity by national standards, for those who watched his onscreen performances in Horrible Histories, Peep Show, and The Wrong Mans during their childhood, he is instantly recognisable. It was hard not to feel starstruck when he entered the room, but Baynton strode in with a disarming smile and an appeal to “call me Matt”.

Baynton’s career trajectory has been far from smooth. Despite his early aspirations to be a musician, he trained with the esteemed “clown guru” Philippe Gaulier. From there, he realised his penchant for comedy.

When his agent told him about Horrible Histories, he was reluctant to audition for fear of trapping himself in children’s TV: “you can really get on one set of tracks. And before you know it, you turn around and no one will let you jump onto other trains.” Upon reading the scripts, however, Baynton decided that “these are really funny”, and he was drawn by the fact that there was “lots of dressing up”. “The rest”, he says, “is history”.

For post-2000s babies, almost all of our early historical education came from Horrible Histories. Baynton says that the influence of the show is “humbling”.

“Quite by chance, I ended up in this show that educated people [because] it was entertaining. And so for the first time in my life, I could actually claim that I was doing something of any real benefit other than just enjoying myself.”

However, educating a generation about their national history comes with a significant burden of responsibility. The individuals that are chosen to be represented, and the shapes that this representation takes, significantly impacts popular memory of the past, especially as it is these memories that form the basis for our preconceptions of history. We ask Baynton about the process of choosing characters to feature in the show, and how this process would change today, especially in the context of race.

“The first thing to say is, [I] didn’t create or produce it. I wrote a few sketches on it. But was originally just cast in it.

“It’s a really difficult one, because on one side, that was a gang show, essentially. And we were the gang and we were sort of portraying everyone. Now the producers obviously realised that there was a line, because when it came to dealing with Africans and African Americans and slavery, for example, which we touched on, [they] quite rightly cast other people.

“I’m sure now that the core ensemble is more diverse than we were as a core ensemble, where the approach then was basically a bunch of white people.”

In comparison to much comedy that dates back over a decade, Horrible Histories has aged surprisingly well. “There was a real desire to shine a light on ignored figures. And you know, I remember we did stuff on Mary Seacole quite early on, for example.”

Despite this, there are still parts of the show that may not fit with modern standards surrounding diversity and inclusivity, especially considering the rapid changes to onscreen representation across the last decade.

“It’s funny, because I look at things [like] Little Britain, for example. Well, you might think that that it have seemed obviously wrong at the time. But I never would have dreamed, then, that a few years later, I’d be looking back at Horrible Histories and going, ‘not sure I should have been playing that’. I think that just shows how we all have to be allowed to some extent to learn and grow and move with the times.”

Baynton is no stranger to comedy’s potential for controversy. He tells us, “there was a brief moment of controversy over Horrible Histories when the Brexit special got put together. And I was really shocked that just presenting history could become hotly political. It really surprised me; I was like, what? This is a song in a sketch in a sketch show on CBBC. And not just that, but one that was done 11 or something years ago.”

In his later Q&A with Union President Charlie Mackintosh, Baynton would go on to describe the backlash against the sketch as “a culture war thing”, with political commentators choosing to paint it as “anti-British drivel”. He disputed the idea that we need to move on from being ashamed of our past, telling the chamber that “shame has a really important function… guilt is a really important part of rearing a child.”

He argues that children remember the discomfort of being told off for doing something wrong, and thus remember not to repeat their mistakes: “That’s what becomes a conscience. That’s learned through the community – same with a society. Shame has to have a function.”

“It is a grown up thing to live with shame. It doesn’t mean that I can’t have pride. [We can] hold seemingly contradictory things at the same moment.”

Another risk that comes with creating a comedy loosely based on history or historical figures is an audience misconstruing elements that serve purely as entertainment with education. Baynton told us, “A lot of people presume because we were the guys in Horrible Histories, that Ghosts is meant to be sort of historically accurate, and it’s really not like. For example, Humphrey, the Tudor, speaks like a modern person; and Mary [a ghost who was burned as a witch], who’s from a more recent time, still speaks… well, she doesn’t speak the way people spoke then, she speaks just this crazy way.

“The truth actually was really rich, like, you can find a lot of inspiring stuff. So there are elements that are historically accurate, but we only use them if they help us write a story, or make something funny. You know, Mary, for example, was obviously burned as a witch, which didn’t happen. Really. I think maybe there were one or two, but for the most part –  and this is fun – women were hanged for heresy. That was the way it was, that was the way we purged these witches.”

During his time in Horrible Histories, Baynton played a broad range of characters from Charles II to William Shakespeare. However, he often ended up assuming the role of heartthrob or showboat. In Ghosts, a show aimed at an older audience but devised and performed by the Horrible Histories troupe, the process of choosing characters was based largely on the ‘types’ the ensemble were associated with. Baynton told us, “we were really just looking for a good ensemble, like a good mix of characters and archetypes and personalities. And so we spoke about it being like a family, and that you would need a moody teenager. It’s not as if there was ever going to be someone else who played [the moody teenager]. So yeah, initially, I think we all thought we were playing characters that we would find fun, that had nothing to do with us… And then over time, we’ve all kind of realised that there’s an awful lot of us in them. And there’s an embarrassing amount of me in Tom Thorne.

“I’m not a sex pest, [but] yeah, there were some similarities. I think he and I both share a sort of ridiculous devotion to the idea of romance.”

Indeed, a lot of Thorne’s artistic passion is derived from Baynton’s own. “I just have the highest appreciation for songs and poems and literature. It’s what makes life worth living. It’s what makes it tolerable even for me. So I didn’t really need to play a poet to have any kind of new appreciation. It’s quite freeing in a way to be able to channel my kind of own artistic failures into a character and make light of them. It’s like airing your slightly embarrassing teenage diaries or something.

“My hope was to be a brilliant sort of singer songwriter like Jeff Buckley or something and break people’s hearts and make them cry when I sang. And that didn’t turn out to be possible for me. But I can enjoy that through Thomas and sort of laugh at the pomposity of [it]. Why shouldn’t a teenager dream that big? I should let myself off the hook a bit as well.”

Creating a comedy aimed at an adult audience offered Baynton and the Horrible Histories troupe new opportunities when producing Ghosts, especially in the potential for innuendo. Nonetheless, one of the rare qualities of both shows is their agelessness: they can appeal to audiences irregardless of generational divides. Baynton told us, “Everyone sort of cottoned on to the fact that [to] make it funny for kids, you just make it funny. And so, with Ghosts, [the] approach really wasn’t that different. And I guess by then we’d sort of got a taste for the fact that you get a bit more inventive if you can’t sort of swear, or if you kind of have to skirt around the subject. And you know, we take quite a lot of delight in people, entendres, and stuff like that.”

Towards the end of our interview, Mathew Baynton rapped the Horrible Histories’ “Monarchs Song” with Charlie Mackintosh, remembering a fair majority of the words. In the following Q&A, a member of the Union asked him to sing the “King of Bling” song, and Baynton’s voice was joined by an ensemble of hundreds of Oxford students who had memorised every word. That entire songs can still be etched in the memories of a generation is proof of the cultural relevance of TV history. Whilst this has solidified Baynton and the Horrible Histories troupe as national treasures, it does urge us to question how we present our past, and which figures we choose to shine a light on.

Editor’s note: This article was amended on Sunday 11th of December to correct an accidental misquote that purported that Baynton himself had said “we need to move on from shame.”, when he was rather paraphrasing the arguments of those such as Boris Johnson and Liz Truss.