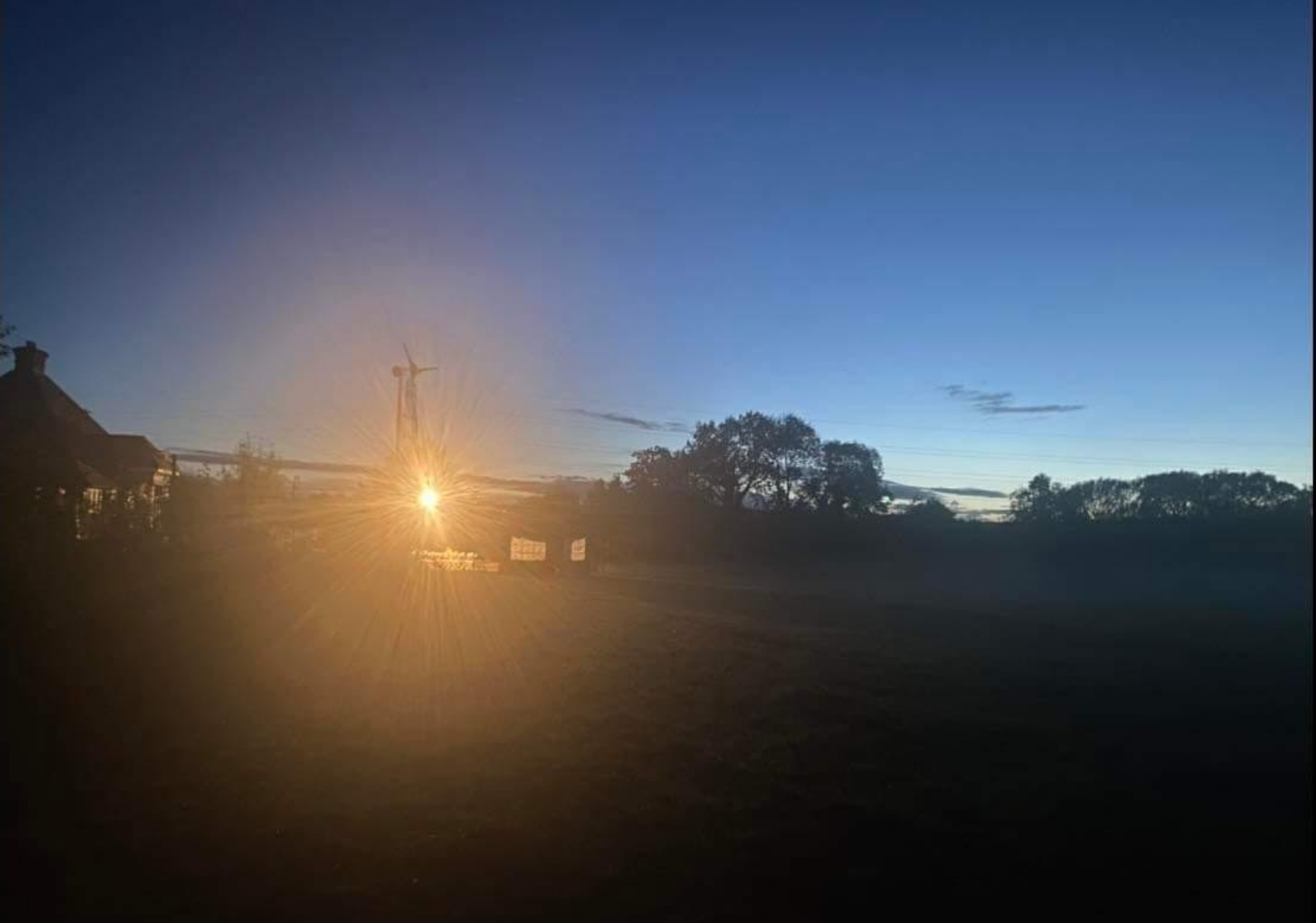 The programme for Mostly Moss Productions’ Enclosure reads: “In this time of crisis hold each other closer. In community with each other, and with the more-than-human, with love: resist”. Not only was this message conveyed in the brilliant original writing of Jamie Walker and the story that unfolded before the audience’s eyes; It was lived every evening. People joined and walked together, shared blankets, drank cups of tea and sat together in the common. That was what was so unique about Enclosure, you weren’t just watching the action, you became a part of it.

It is unusual to see a performance happening outdoors in October, yet charming advice to “follow the fairylights” by members of the crew led the audience into Hogacre Common Eco Park. This site-specific staging  effectively announced the production’s message before it even began. A public access site attesting to the “wilderness ever present and accessible to everyone”, whilst an outdoor setting vulnerable to weather changes served as a reminder of the future of the climate and the ever-threatening potential for extreme weather events. Their message emphasises that we have to face the future together, helping one another out, just as the audience were that night. From beginning to end, in setting and in performance, Enclosure was a truly thought-provoking piece, leaving you questioning your relationships with the natural world as well as one another.

The play opened with the  weekly conservation volunteers, Jules (Lindsey March), Tom (John Gaughan), Ed (Finn Carter), and Debbie (Pareena Verma), sitting together, eating cake Debbie had made and discussing the work they had been doing managing the scrub of the common. We find out that wild boar have returned to the common, meaning the volunteers will no longer gather, as a scientist from Holland comes to oversee the process of rewilding. The story follows Ed, the biology student new to the group, as he learns about the common and the conservation work of both Tom and Ingrid, the scientist, who take opposing views on who owns the land and what should be done with it.

Gaughan gave a captivating performance as Tom, with high emotion and intensity evident as he spoke about his relationship with the common and his pain at seeing it fenced off and blocked to ordinary people in favour of the animals. Defending his stance against the rewilding to his friend Harry (Aryman Gupta), he passionately shouts that “They don’t care!”, forcing us to question our relationships with animals and how we perceive their capacity to think and feel.

In a captivating monologue, Tom takes us through the history of the common, from open ground where wild animals roamed, to a shared place for ordinary people, to the Forest laws that meant that the rich took ownership of the land. It outlined the complex nature of land ownership and privatisation, and provoked questions of why we humans often feel like we own such land when we in fact share it with so many other organisms. Angry, impassioned dialogue was occasionally interspersed by mutter of “it’s freezing”, sending laughter through the crowd, all of whom trying to keep warm on a bitter Autumn evening.

Cass Baumberg and Mary-Jane Woodward played a dynamic mother-daughter duo as Ingrid (Baumberg), the scientist from Holland, in charge of overseeing the rewilding of the common, and her daughter Anna (Woodward). Baumberg gave an excellent performance, bursting with realistic enthusiasm as she taught Ed about the rewilding project. Her performance captured the essence of the play and the feeling that we were not just watching actors, but everyday lives – real people with real care, passion and curiosity for the topics they explored together, which is a credit to the actors’ commitment. Woodward conveyed beautifully (and through few words) the wonder and innocence of a child interacting with the details of the natural world. Movement and playful exploration of the space brought scenes to life, especially a musical interlude during which  ‘animals’ explored the common space, before giving branches to members of the audience – a statement of unity and sharing.

The climax of the piece was the moment that Tom stole the key to the fence from Ed, and broke into the common to kill the wild boar, holding Anna hostage with him. The tension left you on the edge of your seat as Ingrid emotionally tried to explain to Tom the point of rewilding, and that the space would open once again, and this time they’d be doing the conservation work “with them”, referring to the wild animals. Mid-performance, posts and strings were arranged  around the audience, literally closing us in, heightening the intensity of the final moments as they stood trapped either side of a fence, and the audience sat enclosed where we sat.

However, despite the undeniable merits of such a unique setting, it did leave me with questions surrounding accessibility. The route to the common meant navigating poorly lit paths, a raised footbridge with access by stairs only and then the uneven ground of the common.

Located next to train tracks, frequent background noise made some of the dialogue difficult to hear, whilst the biting cold started to feel uncomfortable as time went on. Mostly Moss Productions did their best to combat people walking alone in the dark, organising a walking group from the centre of Oxford to the common as well as having a crew member or two along the route to ensure people could find their way. However, one student, who travelled alone, said to Cherwell, “I couldn’t shake the feeling that between the unlit country roads, terrifying footbridge and lack of signposting the venue was at best difficult to get to, and at worst frightening”. It would seem such a shame for people to not be able to access or be distracted by the challenges of the setting when the piece itself raises so many important questions and holds so many messages about community.

Most Moss Productions’ Enclosure gave a strong and thought-provoking message about conservation, with storytelling eloquently interwoven with fascinating biological and historical facts such as the forest laws and processes linked to rewilding. Under the surface, dialogue about the common seemed to hold a broader social message with lines such as “they used to be a little more fluid and open… a great deal depends on it” together with sighs of “not much difference between us and the common”, seemingly emphasising the need for increased tolerance and togetherness in society, open minds, flexibility of ideas, community spirit. Whilst drawing our attention to important environmental issues at this time of climate crisis, Enclosure also painted a detailed picture of the challenges we as a society face and how we should face them. The answer: together.