Josie Thornton describes the strangeness of viewing Oxford from an outside lens. 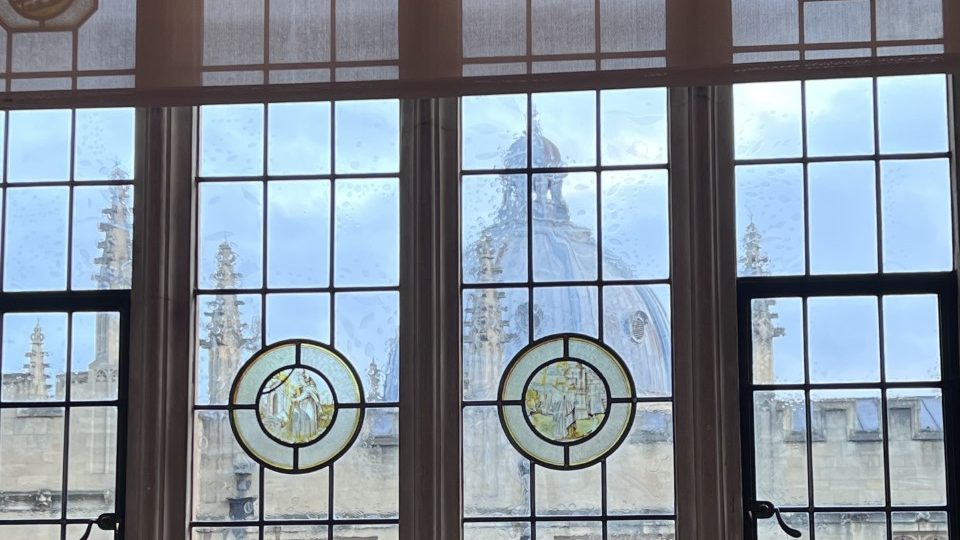 It seemed like a particularly busy Saturday morning as I weaved through the crowds on Cornmarket street. Extinction Rebellion were out banging drums and passing around leaflets. There were buskers on every corner; great gaggles of smartly dressed teenagers with official looking lanyards, perhaps on school trips from overseas; and socialist protesters handing out newspapers. Eventually I arrived at Westgate where I waited to meet my friends, fresh from the train for a weekend visit. The sun was shining in a clear sky, and the golden Oxford stone glowed, splintered as I looked upwards by dark skeletons of bare winter trees lining the streets.

As we approach the final weeks of term the beginning of Michaelmas already seems so far away, and the majority of us have been bouncing about inside the Oxford bubble for at least five, if not six straight weeks now. It is surprising how easily you get used to this historic city, the pretty cobbled streets and the cows grazing in Christ Church meadow. It becomes normal, and the busyness of everyday life often distracts us from where we are.

But the bubble burst somewhat as I showed my friends around, pointing out the old libraries, the cosy cafes and taking them down narrow side streets. Suddenly Oxford changed for me: the place that photo-hungry tourists travel miles to see unveiled itself. As I chatted with my friends about my term so far, I became aware once more of all the things that made my experience of university so distinctly ‘Oxford’ – I found myself translating ‘bops’ as college parties, explaining that ‘scaf’ was informal hall here at Catz and that ‘sub fusc’ was basically just that funny Oxford outfit with a gown. “We’ve made it to Sixth Week now,” I would tell them, forgetting that the statement had very little relevance to students who are accustomed to terms that stretch beyond eight weeks. I felt as though I were in a book, speaking a fantasy language like that which Tolkein created for The Lord of the Rings.

The weather was perfect for a weekend visit. I firmly believe that the best way to see a city is to wander its streets, and what better time for it than a bright, clear skied November day? A bumpy stroll along the cobbles of Merton Street, a drink in the Turf and a perfectly timed walk in Christ Church meadows just as the rowing was beginning all made for a rather picturesque and romantic Saturday afternoon.

It was strange when I turned away from the station, heading back up George Street as my friends caught their train home. Those faces that I had seen everyday at the school gates, those voices I had heard each lunchtime, belonged to people who I now saw much less frequently. Whilst there was something sad about the passage of time that I had noticed so starkly with their coming to visit, after some time to mull things over it was equally apparent to me how wonderful it was that the four of us could be scattered across the country, myself a student, my friends with jobs – different routines, different lives – and yet we could still meet up for the weekend and share smiles and laughs.

A lot might have changed, but we were still the same girls who had dressed up after school and played JustDance together on the Wii. There are certain things that will always be true.