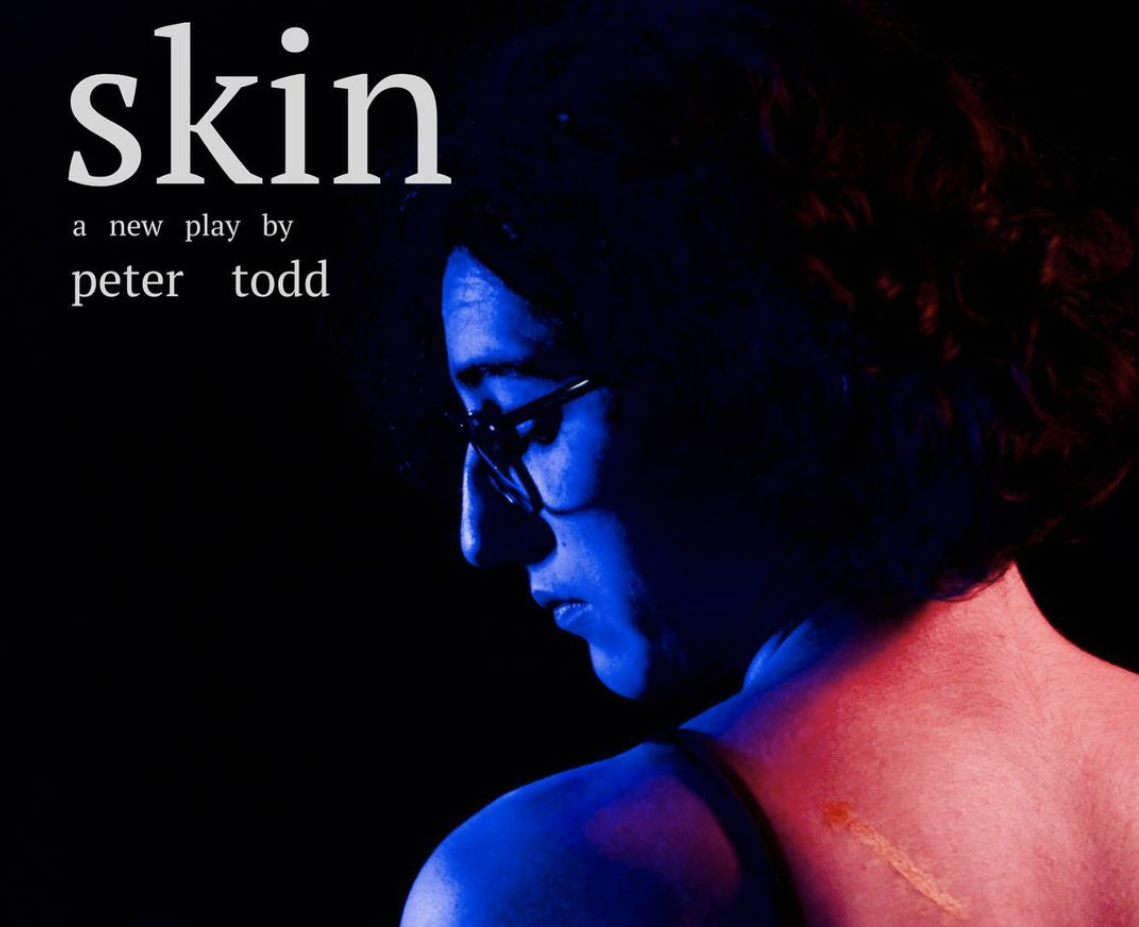 Written and directed by Peter Todd, and led by a phenomenal central performance from Izzy Lever, SKIN is a deeply moving and emotionally honest portrayal of a young woman named Sadie (Izzy Lever) after she is diagnosed with melanoma. Following a brief opening scene between Sadie and her sister Clara (Elise Busset), she learns of her new diagnosis before we, the audience, are hurtled through the next few scenes alongside her as she barely manages to process everything around her. The pace of Todd’s writing and the staging are both key here: Lever is essentially thrown about the stage from scene to scene, with transitions often marked only by a swapping of set pieces and brief changes of lighting. It’s a dizzying experience, appropriately so for young Sadie. We watch her subjected to procedure after procedure and bad phone call after bad phone call, and witness the emotional reverberations of her ordeal.

There is a consistent motif of entrapment throughout. Sonically, for instance, where sound designer Alva Orr does some remarkable work: in moments of extreme stress, a deep bass hum plays from the speakers to simulate tinnitus, drowning out voices and shaking us in our seats. The sound design created an especially visceral atmosphere within the Keble O’Reilly, which is a large space, though set designer Sav Sood fills it well. The set design was smart and functional: minimal enough for efficient stage transitions and to focalise the emotional spectacle rather than the visual, whilst still giving the actors space to breathe. Sadie is mentally entrapped, by a body trying to kill her in her own suffocating skin, but also by uncertainty. The plot is structured to give her virtually no respite, where the threat of ‘sorry, I have some bad news’ always looms. I sometimes felt implicated in Sadie’s entrapment by simply being in the audience, the thrust staging of the audience rendering us more like observers in an operating theatre.

The most arresting part of the play was the expressionist emulation of a CT scan, told largely through movement and metaphor. Sadie begins by speaking to her doctor: this time, a voice from the speakers, and Sadie begins to almost physically shrink in comparison. The stage lights dim, Sadie’s heartbeat thrums, and four nurses with light bars walk around her and start scanning her. She is thrashed around these luminous walls while she struggles to reach for her red ‘panic button’.  Lighting designer Ana Pagu and choreographer Tiggy Jones did brilliantly here and made the whole sequence uniquely terrifying.

Crucially, the visual and sonic elements of the play always served to enhance the performances and never detracted from them. All to the good; the performances were incredible. The supporting cast had to double up on their roles, but you’d never guess it, because they were always convincing as either. Proshanto Chanda was warm and funny as ‘hair dryer man’. Sal Algannin made me genuinely angry as Sadie’s unreasonably awful boss, Simon. I was particularly impressed with the precision of Pip Lang’s dual performances as bubbly Nurse Caroline and stony Dr Kinsela: at one point, one after another! Balaji also remained a friendly and patient presence as Jill, Sadie’s work friend. The two standout performances however, were Lever’s and Busset’s as sisters braving the struggle (and indeed a shared one, as Todd smartly shows). They commanded the stage effortlessly and delivered mountains of heart-rending dialogue with finesse and sincerity, and were totally convincing as siblings. Todd’s writing also deserves more praise than I have space for here, in managing to craft a complex and realistic interior life for Sadie, through dialogue that was quietly beautiful but never heavy-handed or enamoured by its own poetry.

I also appreciated the ending that Todd wrote, despite it being spoiled in the show’s programme (maybe I was meant to read that after the show). Though we never hear the voice on the other end, Sadie receives one last phone call from the hospital: “Yes..?”, she answers, as the final light shines on her face, lingers for a second, then goes out. I’d imagine that’s how she feels.