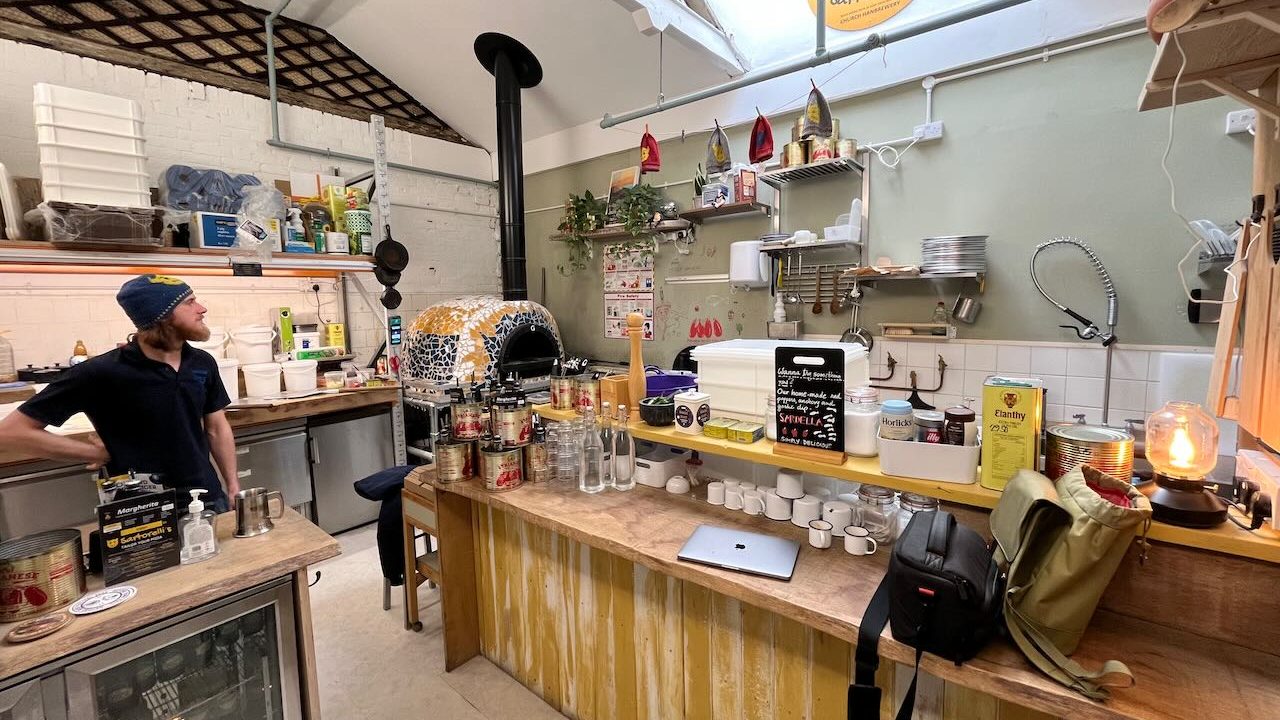 There are so many pizza restaurants around and flourishing as an independent is notoriously difficult. Sartorelli’s does it with apparent ease.  Bursting with personality and great-tasting food in the Covered Market, right in the heart of Oxford, the seemingly endless queues are well worth the wait.

Head Chef and co-owner Magnus was kind enough to invite us along on Monday, the only day when the shutters are usually down, in order to try a huge variety of what Sartorelli’s has on offer.  It certainly didn’t disappoint.

We opened with the nibble board, made up of black and green olives and pepperoni.  The kalamata olives were halved and balanced with olive oil and chilli to produce a really well-rounded snack whereas the green were satisfyingly meaty and offered that trademark ‘olive’ flavour.  It was the pepperoni that really stole the show here though and was the first example of the triumphs of simplicity at Sartorelli’s.  The meat, sourced locally, is baked in the oven on its own in a pan, releasing the oils and brilliantly spicy flavour that come with them.

Next up was bruschetta, Magnus style.  Instead of the conventional toasted bread dish, the chef here uses his conventional pizza base with sliced garlic and garlic oil before topping with heritage tomatoes and basil from the greengrocers next door.  Alongside the anchovy, garlic, and red pepper ‘Sardella’ dip, it is impossible not to just keep going back for more bites.  In all honesty, you could quite easily visit this pizzeria and be satisfied before getting anywhere near the pizzas themselves!

But when the pizzas do arrive, they undoubtedly steal the show.  We tried the Luciana, the Jack the Ripper, and the Big John calzone.  The first was a simple combination of capers, anchovies, black olives and rocket on a tomato base with a touch of garlic.  The lack of cheese means that the salty and intense flavour of the anchovies and capers really punches through.  The Jack the Ripper does bring the cheese (lots of it!) as well as red peppers and triple pepperoni.  The spicy pepperoni is countered by the cheese and the result is a hefty pizza that could definitely feed two for lunch.

Big John’s calzone was my personal favourite.  Despite its crispy and thin top, it maintains its structure beautifully.  That also means that the cheese, olive and tomatoes inside retain so much more of their flavour than on top of a conventional base.  The twist here is the placing of the pepperoni on the outside so that its flavour is released properly, much like when Magnus serves it as a nibble.

The pizza bases themselves are made from the restaurant’s own sourdough starter named Sarah (everything here has a personality-enhancing name) and made with the highest quality white flour grains.  To make these hugely well-sized pizzas even more appealing, they start at just £6.95, with the bruschetta coming in at less than £5.

What makes Sartorelli’s so special, and what I suspect keeps people coming back time and time again, is the true passion and uniqueness of the place.  This is no Pizza Express.  Every base is lovingly decorated with care and flare.  As much as the flavour partnerships on the menu are superb, Magnus is also keen to stress that he is happy to accommodate all tastes.  “If you want pineapple, bring it in and I’ll cook it”, he jokes.  Here, your dough can be rolled as thin or fat as you like it, topped with whatever you want, and cooked as long as desire.  It’s like a pizza science lab where you are given full control but an expert is always on hand to point you in the right direction.

Ultimately, Sartorelli’s is so good because it focuses on doing the simple things perfectly.  It is filled with character and passion, stocked full of top-quality local ingredients, and manned by one of the friendliest, funniest, and most accommodating chefs you’ll ever meet.  Next time you are in the Covered Market, grab a glass of wine from Teardrop (the wine bar next door owned by Magnus’ partner), pull up a stool at the hatch, and chat the hours away with pizza and plenty of Sardella dip!