Hamzah Mahomed unravels the identities layered within the song 'Pasoori' 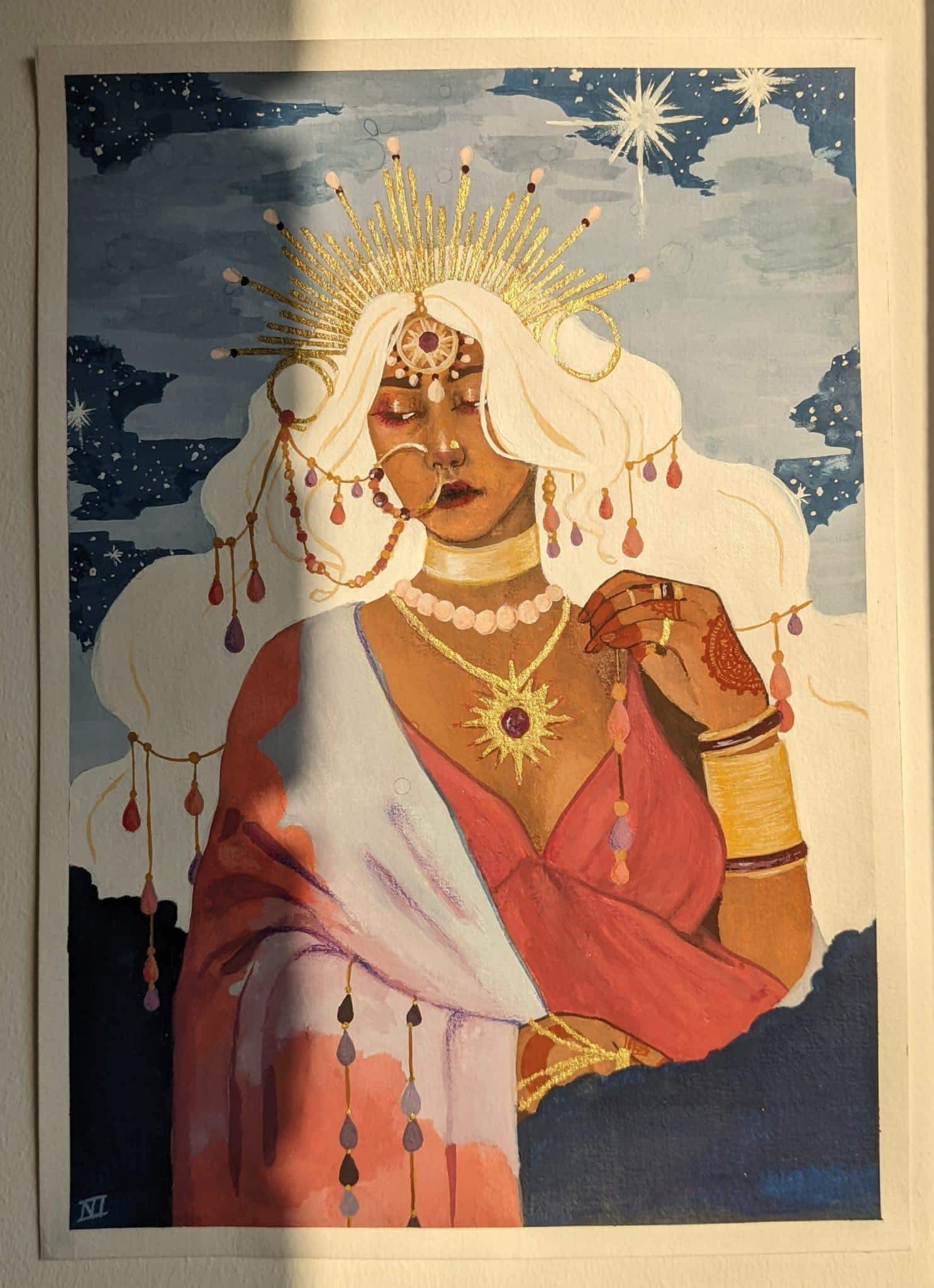 We need to talk about Pasoori. It’s Coke Studio’s hit single by Ali Sethi and Shae Gill which has taken the world by storm. Ranked third on Spotify’s Global Viral 50 list, it was the first Pakistani song to feature on its global song chart. It was sampled in Disney’s Ms. Marvel, has been covered by a Dutch vocalist, a Californian violinist, and me, all the time, in the shower. You might have heard it on Tik Tok, or equally on radio stations from Delhi to London. And if you haven’t, you need to.

Pasoori is more than just a catchy hit which broke out of Pakistan; it’s a beautiful and progressive statement of social and cultural values. Dubbed ‘quietly subversive’ by the New Yorker, it’s subtly provocative all the while feeling profoundly familiar, invoking classical themes and drawing on a number of cultural sounds. Sethi describes it as a blend of raga and reggaeton (“ragaton”), but it blends Turkic, Arab, Persian and Indic influences into a collective inheritance: Turkish baglama alongside Afghani rubab alongside the mandolin. The fusion genre is absolutely stunning, fiercely demonstrating what Sethi calls ‘the free movement of ideas and melodies through song’.

Sethi says a lot through this song. Its lyrics were finalised just 12 hours before the music video was filmed, and it reads more like poetry than pop. To understand its message, you have to consider the context of its production. In 2019, as tensions in Kashmir escalated, Pakistani artists and actors were banned from working in India. Tours were cancelled, prominent Bollywood actors returned to Pakistan, and the mood turned sour for artists on both sides of the border. Despite political tensions, Pakistanis have historically consumed Bollywood movies just as Indians do Pakistani dramas – a huge blow had just been dealt to the cultural exchange between the two nations. That’s why it’s all the more interesting that Pasoori hit No. 1 on Indian charts, just as two Indian teens were arrested for listening to Pakistani music. The song’s success speaks to artists’ ability to dissolve borders, even as they remain as tense as ever.

It almost comes as no surprise, then, that Pasoori follows star-crossed lovers, with potent lyricism that is passionate, uplifting, and full of anguish. Written in Punjabi, a language spoken on both sides of the India-Pakistan border, the lyrics grieve for a love that never was, beseeching the listener to end the lovers’ separation; in the chorus, “My love, don’t let this distance reign”, and the bridge, “Don’t let these lovers be in pain”. This isn’t a clichéd song which asserts that love conquers all, whatever challenges it faces. It encompasses the pain of the separated lovers, decrying the injustice of it all, and dreams of a fairer world. Love itself is given no power, it simply exists, regardless of the world around it – Gill sings, “I forgot about my chains \ and people’s refrains”. It exists, regardless of morality – “If your love is poison \ I’ll drink it in a flurry”.

I should add, rather unhelpfully, that I don’t speak Punjabi, and many of the words used are difficult to translate. For example, the expression ‘my love’, mere dhol, used in Pasoori also means ‘my drum’, as though invoking the sound of a heartbeat. Pasoori itself doesn’t lend itself to an easy translation – it can mean ‘conflict’ or ‘impatience’ depending on the context. The ambiguity in the title captures perfectly the lovers’ situation. Are they simply waiting for one another? Or has some conflict kept them apart?

A song like this isn’t particularly bold or new; classical desi music is full of examples. Only, it feels ever more prescient in today’s world of fortified borders and isolationism. This song, this conflict, has struck a global nerve. And as with all great pieces of art, it faithfully reflects whatever interpretation we project onto it; the border in question might be India and Pakistan, but it could be the US and Pakistan – Sethi spent his life between these two places. Pasoori could equally be an anthem for the diaspora, people whose lives are truncated by borders and who are isolated from their family and culture.

Upon watching the music video, I was struck by another conflict: a conservative history, and a progressive future. The striking visuals and gorgeous soundscapes tell a powerful story of identity and authenticity. To me, the conflict is with one’s own identity.

The video aesthetic captures the traditional crux of the song while feeling contemporary, reflected in the singers’ modern interpretations of traditional outfits. Sethi wears a striped kurta and matching cap, what one might wear to the mosque, but with bold colouration and futuristic sunglasses: as he describes it, ‘of the past and of the future’. There are gorgeous scenes of a girl with a nose to ear chain, bridal jewellery turned gothic, and boys performing a traditional jhumar dance, kurtas flaring in an effeminate twirl. Although it took me a long time to decipher, there is what I percieved as queerness tucked alongside the old-Bollywood duet. Stills of a young man in gem-studded makeup, piercing gazes from a woman in a room of flowers, a boy in bright yellow and blue clothing; their meaning is just beyond reach, their stories untold.

Shae Gill brings a slightly smoky timbre to the duet, very different from the high pitch of classical Indian female vocalist. And Sethi is singing masculine pronouns in a love song: “He said he’d come, he never did \ my heart lurched and slid.” I wasn’t surprised to discover, then, that Sethi is a queer artist, and has touched upon gender identity and sexuality in his work before, such as with his song Rung (meaning ‘Colour’) which celebrates LGBTQ identity. Perhaps unsurprisingly, when I listen to the song, this is the conflict that resonates with me the most.

And yet, for such subversive undertones, the heart of the song is the Ghazal, which is a form of amatory poem associated with Sufi Islam. The music video begins and ends with Sheema Kermani performing a classical Indian dance called a Bharatnatyam. The beat follows traditional Indian raga, which is a framework for improvised classical music. Pasoori readily evokes traditional themes while dreaming of an inclusive, bohemian future.

It’s hard to describe the boldness of this metaphor, and the importance of it going viral. The closest analogy I can think of is how Hozier’s Take Me To Church uses soul to align romantic gay love with love for God. Sethi admits that the appetite for Sufi music in Pakistan allows him to approach subversive ideas through the metaphors of Sufi poetry. He calls these metaphors ‘beautiful, deliberate ambiguities’. Like singing a love story as a man, to a man, perhaps.

Homosexuality has been criminal in Pakistan since the British Raj. Since then, religious fundamentalists have kept it so. Yet, the Ghazal has never been entirely heterosexual. Although we may now call this queerness, pre-modern Ghazals left the gender of the subject ambiguous, as they were concerned with expressing man’s love for God – the subjects were simply aspects of this divine beauty. Sufism emphasises pluralism, tolerance, and an inward search for the divine. It’s a far cry from what many (in the West and outside of it) perceive Islam to be, today. As Sethi says, ‘It’s unfortunate that we [Pakistan] are associated with closemindedness sometimes, especially in the West. And I think that our music and our art and our culture are opportunities […] to showcase the alternative: which is that long before they thought of it, we were it’.

As its music video passes 300m views, and it remains on Pakistan’s top charts, it speaks to the heart of our understanding of love and God. Our collective hope for these star-crossed lovers must be that they teach us to be kinder to one another, that this song is indeed able to transcend ‘boundaries, borders and binaries’.

(Now go listen to the song, with captions on)