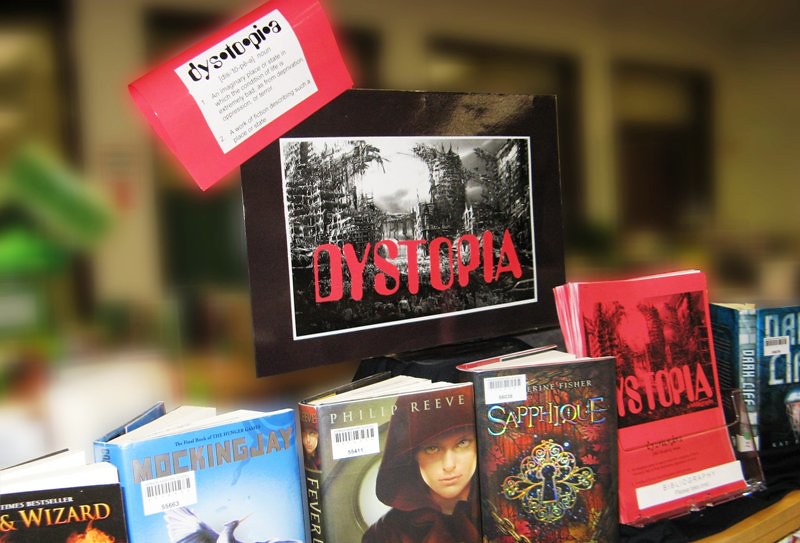 Like many of you, I’m kind of a slut for the dystopian genre. The first time I read The Hunger Games was in my stuffy Year 5 classroom, drowning out the sounds of Snakes and Ladders and Uno games as we were kept in for wet play. I felt like I had escaped to a new, scary other world. Even if it bore some similarity to our own world, I could be rest assured that when I closed that book I wasn’t fighting for my life in a totalitarian dystopian regime, I was sitting in my village school classroom hoping they serve apple crumble at lunch.

Nowadays I can’t figure out if I’ve gotten old or the world has gotten worse, but reading dystopian fiction is hitting a bit too close to home… I read books for escapism but this summer after reading All That’s Left in the World by Erik J. Brown and the Legend series by Marie Lu, I just feel like I can’t escape my own reality. And yes, I know what you’re thinking “That’s the point of dystopian fiction, it’s supposed to reflect our society blah blah blah”, and I get that obviously. Still, there’s just something a bit too sinister about how much it’s reflecting our society. Like George Orwell’s 1984 was so crazy I doubt anyone reading it at the time was like “Oh yeah, I can totally see this as becoming our reality in the next 10 years”, well, maybe someone did, but everyone definitely thought they were a weirdo. In All That’s Left in the World the story follows a pair of young boys as they navigate a post-apocalyptic world that was devastated by a pandemic. In the book they struggle to navigate a world where most of the population has died because they and the government refused to take the illness seriously. Then more people died from violence and starvation due to hoarding of supplies by a select few. And then top of that, white supremacist neo-nazi-esque communities start to spring up in order to rebuild society in a very twisted image of what they considered ‘perfect’. Reading this felt eerily familiar to the year 2020. Like, too similar, like I’ve literally lived all of this already, of course not to the degree of the characters of the book, but enough that I was very uncomfortable. This wasn’t a very far away distant future like the one Orwell imagined for his readers, this felt like it could be our reality next year. Though I suppose that was Erik J. Brown’s intention seeing as he published in 2022. It’s still a world away from the typical almost fantastical dystopian worlds given to us by Suzanne Collins and Veronica Roth.

Even the Legend series by Marie Lu, though I read it two years ago, rereading it this summer made me squirm. The series follows a pair of teens on other sides of the economic scale, surviving in a totalitarian region of America. During this time the is a sickness running amuck in the city, mostly affecting those living in poverty in the underbelly of the city. Then (spoiler alert!!!) it’s revealed that there really was a cure for this plague, and the government decided to only give it to the rich and used the plague to cull the poor essentially. Heavy stuff, right? But is it a stretch to argue that this was kind of similar to Covid policy? Of course, the government didn’t create Covid, and I’d like to think they weren’t intentionally trying to unalive people. But undeniably Covid policies allowed the rich to get richer and be safer, whilst the working class, and notably, those in the service and healthcare industries remained unsupported and made to work in unsafe environments. Marie Lu wrote this series in 2011, a good 8 years before Covid-19 was discovered, but there were many similarities between the society she conjured (perhaps predicted?) and the society we live in.

Of course, I don’t think Marie Lu’s society could exist within the next five years or Erik J. Brown’s apocalypse will happen in the next couple of months. But, the fact that in Britain we’re having conversations on how to keep poorer people alive during the winter (some interesting characters on the internet think that 3 bowls of porridge a day and some Primark blankets are going to protect people from the cold and hunger). It makes me wonder if the dystopian novels that we read, the social and economic inequality expressed in this genre, are really so far off from our own reality. And I wonder, if we realised how close we were to experience the reality of the dystopian genre will we change our society? Will the genre become fun again? Or perhaps, the new appeal of the genre is its extremely close proximity to our reality. But let’s be honest, there’s no fun in that at all.