In conversation with Francesca Tacchi 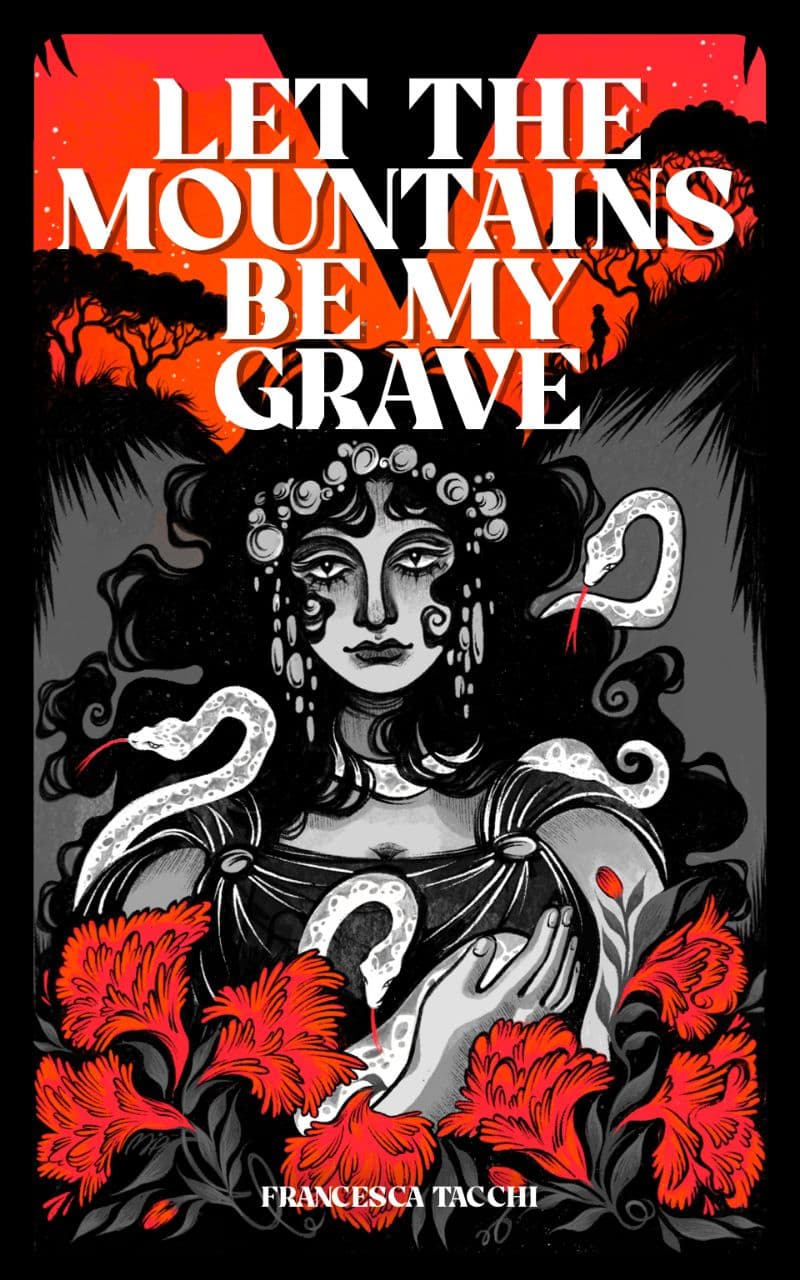 Any book that begins with the sentence “Every day is a good day to kill Nazis” is bound to catch my interest. Luckily for me, that’s just how Francesca Tacchi’s Let the Mountains Be My Grave, begins.

Tacchi (xe/xem/xir) is a neurodiverse, queer Italian author, also contributing to Transmogrify! (June 2023), a YA anthology where trans people claim the central stage in fantasy stories. I’m Tacchi’s friend, and I have been anxiously waiting for the book’s release since day one. I was not disappointed when I finally got my hands – or should I say mouse and keyboard, since I read it electronically? – on xir novella. So this review is not entirely unbiased, but I will, of course, do my best to give a fair review.

Let the Mountains Be My Grave is an antifascist, queer novella set in 1944 Italy, just after the Allied forces landed in Sicily. The title is a reference to a verse from the well-known partisan song, ‘Bella Ciao’. It’s a semi-historical book, filled with good humour, touches of Etruscan mythology, and some fantastical magic.

Tacchi said that xir inspirations behind the novella were mainly drawn from the fact that in WWII media the partisans are rarely represented.

“This war is a Hollywood darling, but most movies are focused on the Allied intervention,” continued Tacchi. “Very little space is given to local resistance movements, even when they were pivotal in defeating the Nazis, as in the case of Italy.”

The main character is Veleno, a 20-year-old partisan with his heart set on vengeance because the Nazis ruthlessly killed his uncle and father. Hailing from the small Abruzzese town of Cocullo, Veleno is armed with an unusual weapon: the healing magic of the Chthonic, pre-Italic deity named Angitia. Cocullo celebrates St Dominic, patron saint of protection against snakes, in its yearly Festa dei Serpari (Festival of the Snake-Catchers).

Tacchi’s interests in history and ancient Italic paganism, along with xir history and tradition, were among their other inspirations. Tacchi masterfully balanced realistic and fantastical elements well. I also liked xir fictional interpretation of the war as including these ancient gods, but the fate of the war ultimately being in human hands.

The novella is pleasingly fast-paced and includes a set of diverse, lovable characters: Mosca, a Catholic; Irma, a Jew; and last, but certainly not least, Rame, a communist. These names have specific meanings in Italian; this is because the partisans in the novella take on new names when joining the resistance.

“They were…united by the hate toward fascism and the desire to finally see Italy freed from Nazi occupation,” wrote Tacchi in xir author note. “I wanted to portray this diversity in the main characters of this novella.”

As an Italian-American Jew, I was especially happy to see the inclusion of the Jewish character, Irma, an academic. Irma has powers from a pre-Italic god, Tinia, who Irma describes as ‘the Etruscan Zeus’. I also appreciated the inclusion of the Italian version of ‘Echad Mi Yodea‘ (‘Who Knows One’), a traditional Pesach song. The lyrics demonstrate themes of freedom and resistance, which I thought pairs well with the novella’s own themes.

My Jewish brain also brought special attention to one bit of dialogue where Rame asks Irma how her relationship with Tinia goes with being Jewish. He assumes that Jews are forced into monotheism. She responds to Rame with grace. She explains that she personally believes in henotheism or monolatry, meaning that she believes in one god, but doesn’t deny the existence of other gods. She also explains that her standpoint isn’t one accepted by all Jews, a very important note for her to make. I think the author handled this tough topic best xe could by avoiding a generalisation of Jewish belief. Even between me and my two other Jewish friends, we disagreed on a general Jewish belief on Irma’s stance within the novel which goes to prove my point!

Aside from the Jewish representation, I also enjoyed Tacchi’s criticisms of American foreign policy across the globe. As was the author’s intention, Let the Mountains Be My Grave does not glorify the Allies’ involvement in liberating Italy from the Nazis.

Veleno feels that the Allies have no business being in Italy, and their assistance is likely rooted in self-interest rather than a genuine desire to help. He is concerned about the Americans potentially annexing the Italian peninsula: “What if they [the Americans] won’t leave, after the war is won? I’m not so sure I’d like to see Italy being liberated from the fascists just to step into the shadow of one of the Allies.”

Although I’m half American, my Italian half catches Tacchi’s critique. After the war, the US began to station a large number of its forces throughout Europe. There are currently seven US bases in Italy, one of which is situated near my mother’s home town of Aviano.

On a very different note, the novel is unabashedly queer. “The choice of including queer people in my novella was quite simple, as I’m queer myself and always hungry for more representation [within the fantasy genre,]” said Tacchi. Xe also wanted to show that the most broken and messy of people deserve love. Xe hopes that queer readers will feel validated when reading this relationship.

While I enjoyed all of these aspects of the novella, I do have a few criticisms. My major one would be that some of the writing could be termed awkward. Although I enjoy belittling fascists any day, repeatedly calling Stormtroopers ‘Nazi pigs’ was a bit tiresome. There were also some strange descriptions, especially when it came to characters and people. I won’t be too critical about the issue of awkward writing because English is Tacchi’s second language, and xir writing really improves as you get further through the novella.

These tendencies were balanced by some beautiful writing, however. There is some rather beautiful prose, not only about Veleno and Rame’s love for one another, but also about depression, memory, justice, and the general human condition.

Lastly, I enjoyed the importance of song and music throughout the novella, the lyrics of which are included in their original language. In xir author note, Tacchi said that xe wanted to do this because the songs are symbols which are deeply rooted in Italy’s cultural history. Xe felt that translating them in-text would have, in a sense, warped these songs.

“I really wanted to include songs and music first and foremost because songs are an important symbol of Italian resistance,” said Tacchi. “Songs are powerful in conveying a message, and also to more viscerally represent a people. Folk songs…are very common in Italy and traditional music plays such a big role in our culture.”

To conclude, I would strongly recommend reading Tacchi’s novella. I think the subject of Nazis, and fascism—and even more importantly, resistance to those ideologies—is becoming increasingly important with the resurgence of the far right across the globe. Furthermore, positive fictional queer relationships such as the one in Let the Mountains Be My Grave, are really needed because romantic relationships between men in fiction tend to end in tragedy. I genuinely look forward to Tacchi’s future releases, and I am excited to see how xe develops as a writer.