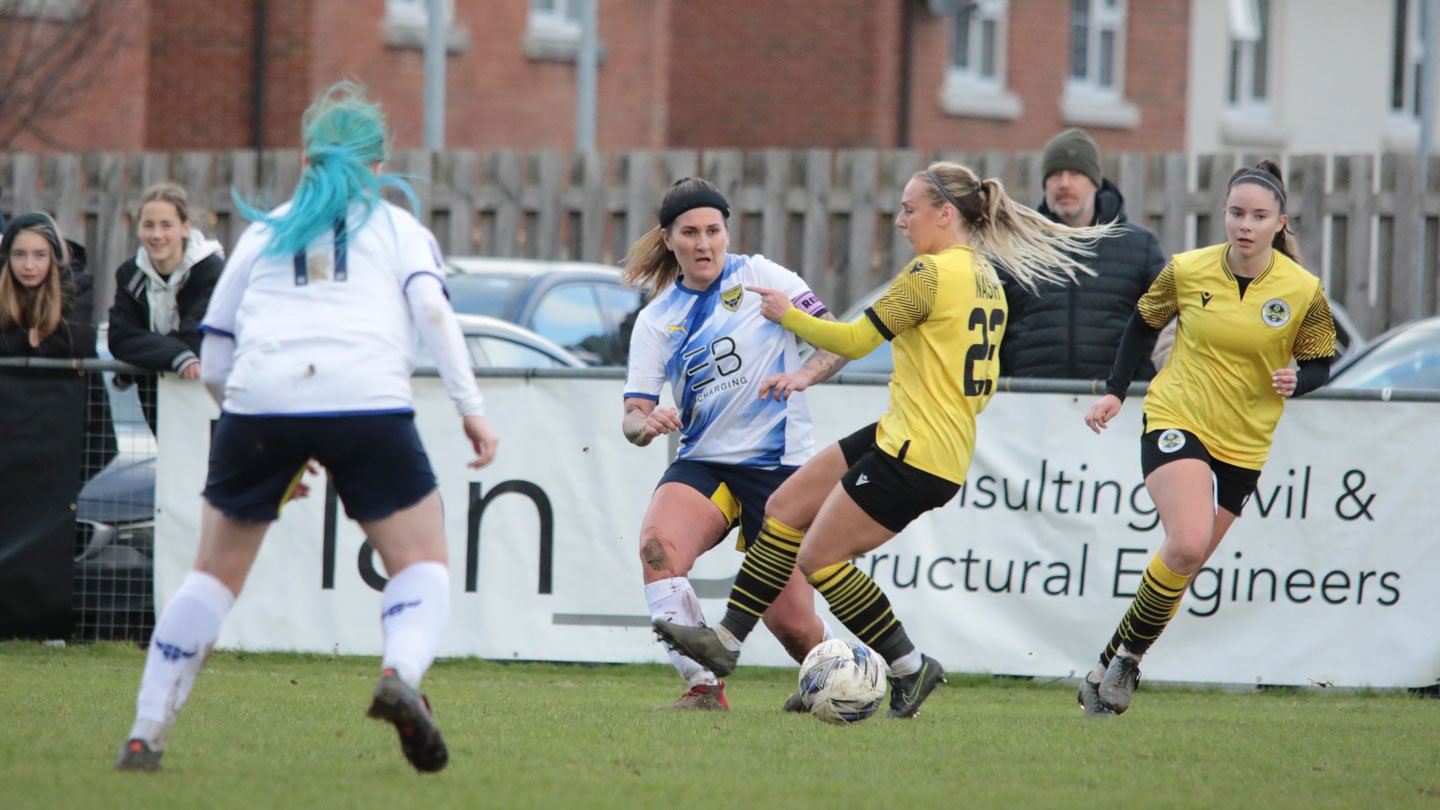 Another week and yet more drama at Oxford United.  At the end of it, the men’s side have two more great results in the bag and are sitting pretty in fifth, just five points off MK Dons in third.  On Sunday, the women faced a historic cup clash.

Tuesday night saw the men travel to the DW to take on one of the league’s big favourites for automatic promotion.  A brilliant start saw the U’s take the lead through Matt Taylor inside 25 minutes but Callum Lang responded with an equalizer just thirteen minutes later for the side currently sitting second.  The sides battled hard throughout the first half but in the end either could have stolen the three points and both were probably left happy with a draw.

Going into Saturday, the Yellows faced a different challenge against Portsmouth.  Oxford were favourites before kick-off and took the lead after just six minutes through Luke McNally.  They would only lead for four minutes before being pegged back by Michael Jacobs and more early drama followed five minutes later when the visitors went down to ten men.  Pompey held on until the break and then took a shock lead six minutes into the second half.  Oxford stayed calm though and the deserved equalizer came through a Cameron Brannagan rocket with the clock running down before Nathan Holland scored another late winner to steal the three points back from the jaws of defeat.

The women had no such luck though as they fell just short against the Crawley Wasps.  The 1-0 defeat saw them bow out of the National League Cup at the quarter-final stage, success they will rightly be proud of after so much fixture congestion this season.  The only goal of the game came through a Stephens header just after the half and despite their best efforts, the Yellows couldn’t fight their way back into it.

Next week will see the women return to league action against the London Bees as they continue their promotion push.  The men travel to Accrington Stanley under the lights on Tuesday before returning home to host 10th placed Bolton on Saturday in another packed week.

It was another crazy game at the Kassam for Oxford as another late Nathan Holland strike saw the Yellows secure a massive three points after being behind with eight minutes left to play.

Six minutes into the affair, Billy Bodin swung in a trademark corner delivery and Luke McNally nodded the Us in front.  The elation of the home fans was ended just a few moments later though when the visitors equalized:  a defensive mix-up saw Kieron Freeman offer up a chance that Jacobs couldn’t miss.

Joe Morrell was somewhat controversially sent off after just sixteen minutes when referee Samuel Barrott adjudged him to have gone in far too high on Cameron Brannagan.

The visitors stayed resolute though in spite of total Oxford dominance.  Bazunu was sensational in the Portsmouth goal to deny several big chances for the home side but going into the break it seemed like it would be just a matter of time before Oxford retook the lead.

However, Ronan Curtis hadn’t read the script and did superbly well to work an opening down the right-hand side and slot past Stevens in goal to make it 2-1.

Oxford needed inspiration and brought on Nathan Holland in an attempt to find some.  Find some they did: Cameron Brannagan capped what is surely the standout week of his career with a rocket from 25 yards out to bring United level on 82 minutes.

Then the chances just kept on coming and Nathan Holland ran straight at the heart of the Pompey defence deep into injury time.  He somehow managed to dance his way through, stayed on his feet, and slotted past a distraught Bazunu to score off the post and wrap up the three points in front of a euphoric home crowd of well over 10, 000.The promotion chase is very much still on then and next week will see United travel to Accrington Stanley before playing host to 10th placed Bolton.  Both games are highly winnable and favourable results elsewhere could see Oxford up into third before the week is out.