Review: “Kid A Mnesia” by Radiohead 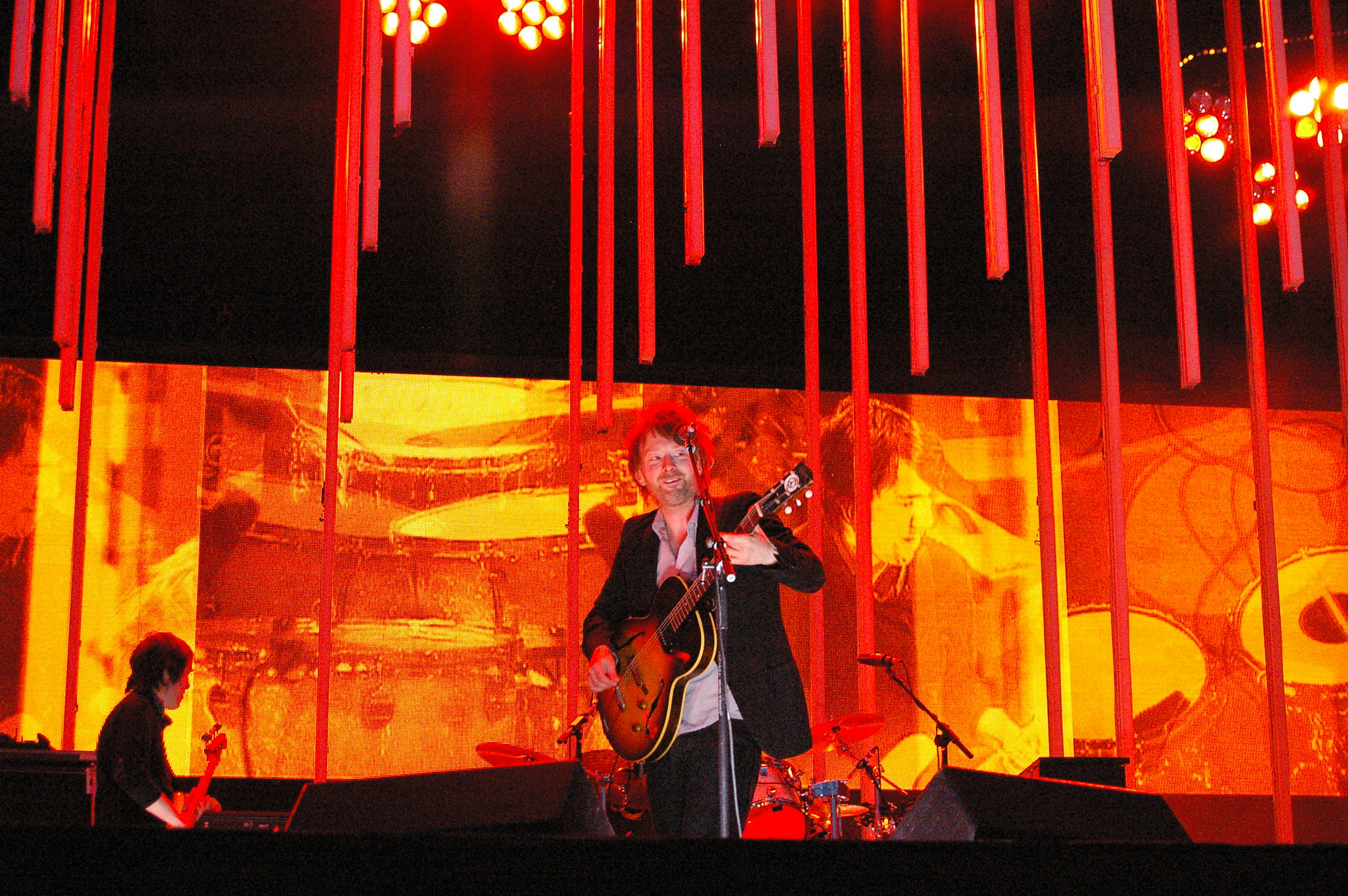 Kid A and its sister album Amnesiac helped introduce electronic instruments to alternative rock, and were a risky sonic departure from Radiohead’s guitar-based and immensely successful OK Computer. But there is a sense in which OK Computer and Kid A were also a natural progression. If OK Computer was interested in collective anxiety about a rapidly technologizing, isolating world, Kid A represented the realization of those fears. In Kid A the machines have arrived, in the form of an Aphex Twin and Autechre-inspired soundscape, and what remains of the human element is scrambling around for whatever meaning, structure and coherence it can find. Listening to “Idioteque”, “Everything in its Right Place” and “Kid A” you sense that the organic voice is keeping the electronic forces at bay, but only just. And sometimes the electronic forces gain control, as in Amnesiac’s more experimental “Pulk/Pull Revolving Doors” and “Hunting Bears”. Then the world is looking very inhuman.

As with 2017’s OKNOTOK, this re-issue of Kid A and Amnesiac is a twentieth anniversary celebration of one of the group’s most creative periods, featuring both albums and a further disk of twelve unreleased tracks. Since the original songs have not been remastered, whether this is a fitting celebration largely depends on whether these twelve unreleased tracks deserve inclusion.

At their core is a pair of quite polished songs. “Follow Me Around” has been knocking about for many years (see the performance by Yorke and Jonny Greenwood in Macerata in 2017, and the earliest version on the 1998 documentary film Meeting People is Easy). “If You Say the Word” came out of the blue, though. Or almost: in Ed O’Brien’s diary entries from September, 1999 he does talk about a song called ‘say the word’, which he says has ‘great drum, bass and vocals’, although he is ‘personally getting a bit anxious over it, as i [sic] can’t find anything that works with it, or rather i have an idea but can’t get the sound right. makes me a bit neurotic’.

It seems Ed must have eventually got the sound right because these are both album-calibre songs. But you can see why they never made it onto the original releases. “If You Say the Word” features some disquieting ondes Martenot, like several of the band’s more haunting songs from the time, and some equally disquieting lyrics: ‘when you forget how lucky you are, buried in rubble, sixty foot down’. Nevertheless, it’s a little too calm and contemplative to belong fully alongside riled-up Amnesiac tracks like “Packt Like Sardines In a Crushd Tin Box” and “Knives Out”. WhereasAmnesiac is claustrophobic, “If You Say the Word” is airy and spacy. Almost uplifting. Too much so to be on an album whose cover features a crying Minotaur.

“Follow Me Around” is a good example of Radiohead refusing to release a song until the ‘right’ moment (sometimes, in my view, many years too late when things have moved on, cf. “Lift”). But it’s better late than never on this occasion. The main difference between this version and the live performances is that Yorke’s voice is partly fed through a computer, in true Kid A style, though only to the degree that it sounds like he has an artificial voice shadowing his real one. I thought this a little odd at first listen, but it’s grown on me; his voice is quite literally followed around. Yorke sings ‘I see you in the dark…Comin’ after me, yeah, headlights on full-beam, comin’ down the fast lane’, and thus continues his important tradition of motoring-themed lyrics and song titles (see “Killer Cars”, “Airbag”, “Stupid Car” and “Traffic”).

The accompanying video for “Follow Me Around” unfortunately doesn’t achieve much that wasn’t done already in the 2017 “Man of War” video, featuring another man running from a faceless, frightening force. The video for “If You Say the Word” is quite humorous by Radiohead standards. In absurdist fashion, ‘wild’ city workers are captured from a state of nature and brought to the City, a tamed, closed environment where they live a sanitised working existence.

The other ten tracks are a mixed bag, but there are flashes of brilliance throughout, and it is noticeable how well the songs are sequenced and blended. It sounds much more like a concept album designed from the start as a seamless succession than a collection of odds and ends assembled 20 years later. “Like Spinning Plates – ‘Why Us’ Version” opens the disk. It is similar to the piano-based live version released on 2001’s I Might Be Wrong, but has a curious (probably early) alternative vocal melody, and a stunningly ethereal outro. This certainly has a claim to being the best version of the song. “Untitled v1” is a spooky, uncertain ambient interlude that flows serenely into “Fog – Again Again Version”, which pitter-patters cheerfully before Yorke’s fragile, melancholy vocals arrive. He proceeds to make you feel strangely wistful about ‘baby alligators in the sewer’ who ‘grow up fast’.

Then come the two polished songs already discussed, followed by “Pulk/Pull – True Love Waits version”. This song’s title sounds preposterous. How, I wondered, could the sparse electronic moodiness of “Pulk/Pull Revolving Doors” and the anthemic “True Love Waits” come together? Surprisingly they do so rather well, becoming a relaxed but purposeful version of “True Love Waits”. This adds a third (album) instalment of the song, following the live acoustic version in 2001 and the subdued closer of A Moon Shaped Pool. It’s a combination I didn’t know I wanted, but it works. I also find it funny that “Pulk/Pull Revolving Doors” might possibly have never come about without “True Love Waits” needing a backing track.

The ambient “Untitled v2”, which has shadows of “Pulk/PullRevolving Doors”, leads into “The Morning Bell – In the Dark Version”, the third version of the song in as many disks. This is rather plodding and doesn’t add much to the other versions. “Pyramid Strings” is also underwhelming, albeit menacing. The more determined drums of “Alt. Fast Track” then kick in, which feels like you’ve just fallen into a Bourne film. It’s only a sketch of a song, but it’s quite compelling. A shame it isn’t longer, though. “Untitled v3”, which recalls the harp at the end of “Motion Picture Soundtrack”, melds into “How to Disappear into Strings”. This is a sinister and cinematic end to the disk, reducing the Kid A song to its bare orchestral essence, and forming an organic and satisfying closer.

In the book accompaniment to the re-issue Kid A Mnesia Yorke describes how after OK Computer ‘There was this fierce desire to be totally on the outside of everything that was going on, and a fierce anger, and suspicion. And that permeated everything’, and how when making Kid A he would ‘be going off on one in all directions, flailing around, experimenting with lots of different things’. From this period of clearly intense and repetitive creative struggle emerged an engaging, challenging and frequently intoxicating body of work. There was no need to put Kid A Mnesia together. But the additional disk is more than worth having for those who enjoy this Radiohead era.