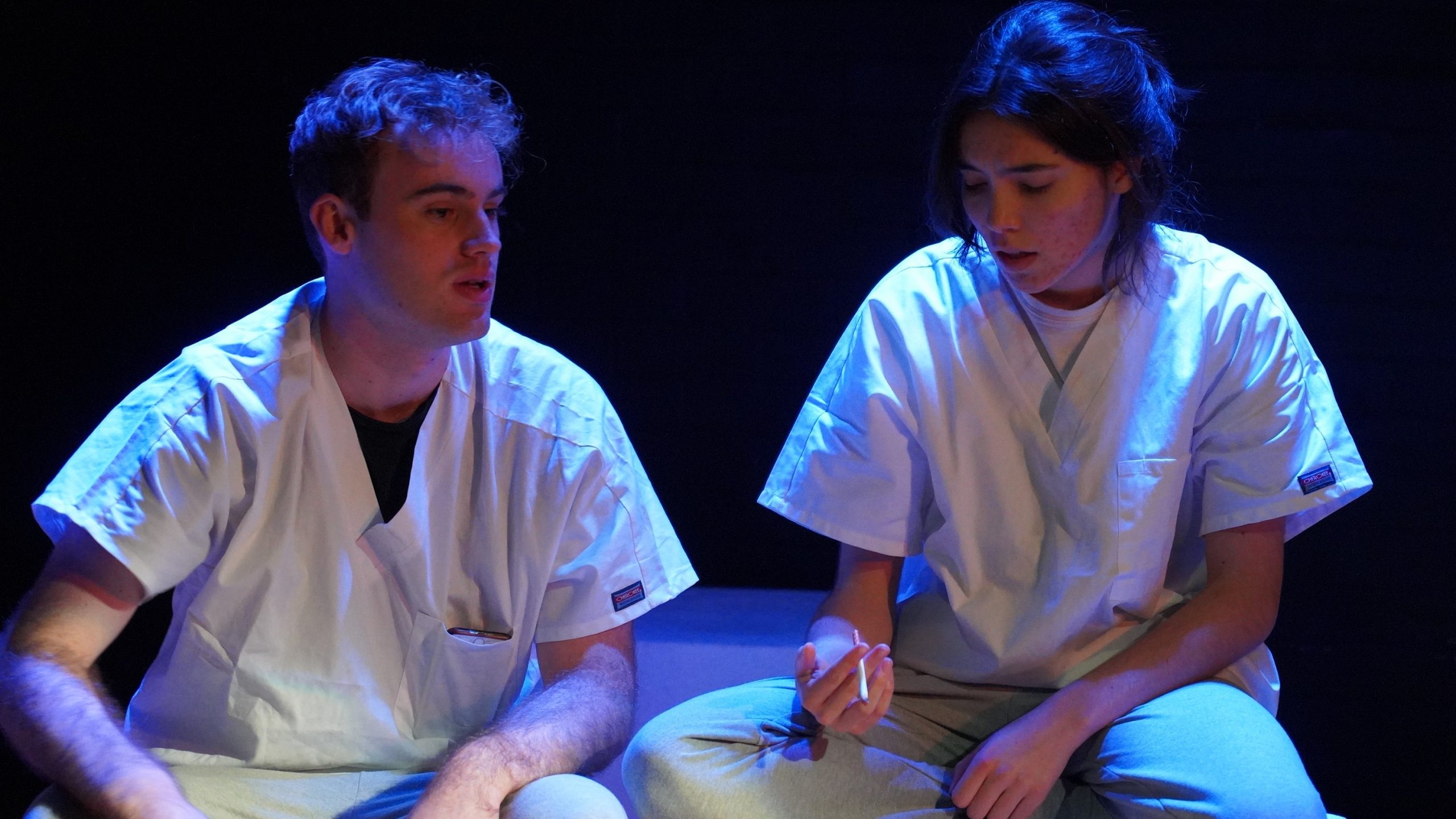 Review contains spoilers for The Effect

Buzzcut Productions’ thrilling, cathartic staging of Lucy Prebble’s The Effect is an emotional rollercoaster of sex, sadness, love and jealousy. However, these age-old themes in literature and drama are explored in a novel setting: the cramped, isolating environment of a fully controlled clinical trial for new antidepressant medication. The play only has four characters – two doctors and two patients – and deals with the fraught, moving, and painfully human interactions between them. The play is well-written, well-staged, and deals with interesting and topical issues, but it is these painfully truthful human relationships that elevate it from an evocatively written commentary on medical ethics to a truly perceptive piece of art.

We are introduced at the play’s beginning to the two clinical volunteers, as dissimilar as can be. Tristan (Jules Upson) is tall, blond and bursting with life, filled with an easy confidence and a belief in his own charm that helps to distract, at first, from the emotional highs and lows he is prone to. Connie (Grace de Souza), by contrast, seems permanently on edge, fired by her inquisitive mind and destabilised by depressive tendencies that fluctuate throughout the play. Director Gabe Winsor’s apt casting helped to underline the disparities between these two characters, not least through their differing appearances and physicality. However, a stellar performance from both cast members of this well-written relationship gave their on-stage dynamic a forcefulness and intimacy that only mounted as their mutual curiosity and what seems to be rapturous love breaks down the barriers between them.

Monitoring the clinical trial is Dr Lorna James (Kaitlin Horton-Samuel), a psychiatric professional with a history of depression herself and a complicated relationship with the wealthy senior consultant Dr Toby Sealey (Alec Watson), who has organised the trial. These two have less onstage chemistry than Connie and Tristan, a potential flaw if one sees Prebble’s ‘two pairs’ as designed to mirror each other and strengthen each other’s characterisations through contrast; however, the superb individual performance of each actor more than makes up for this, and arguably reinforces subtly the themes Prebble is trying to explore. Watson portrays the sympathetic charm that propelled Toby so high up into the medical world with a perfect eye, while at the same time always undermining it with hints of his overriding selfishness and egoism. His self-effacing pride in the final scenes of the play at Lorna’s hospital bed after her suicide attempt, when he thinks “she might like to know” that he is finally going to step up onto the next rung of the corporate publicity ladder and start writing the book he has been planning, is a perfect example of this: the blindly mercantile workings of his character take on full force in Watson’s nuanced portrayal.

While Connie and Tristan are ostensibly the ones being tested for depressive symptoms or lack thereof, the play’s most penetrating analysis of depression and mental health issues comes in Lorna’s speeches. Her impassioned soliloquy at the end of the play seeks a reason for the senseless, numbing pain she and so many others are prey to, moving from faint sparks of hope and the knowledge that one must simply keep going, to an abyss of self-destructive despair. It is no exaggeration to say that the audience members were moved to tears (I myself could not stop crying during it, and judging from the muffled sniffles surrounding me on the night, I was not alone). It is fair to say that this scene is what really endows The Effect with a deep understanding of the existential angst and despair involved in being alive, that is so uniquely human. Horton-Samuel’s Hamlet-esque pose with Toby’s human-brain stage prop while delivering these ruminations was also an effective touch, harking back to the quintessential dramatic exploration of depressive misery without seeming the least bit derivative.

By contrast, Tris and Connie’s struggles with mental health pale slightly before those of their doctor (a nicely unsettling twist from Prebble); however, the electric sparks of love and intoxicated rapture that fly between them more than make up for this. Their portrayal of love as bewitching and easily lost is effective and scarily accurate, as is Tris’s violence and anger when he finds Connie attempting to distance herself from him, showing with pinpoint accuracy the often-overlooked knife edge on which love and hate for a person can balance when emotion reaches an overwhelming fever pitch.

However, the play ends with a display of hope and kindness by Connie. The audience, by this point wrung out by the play’s comprehensive coverage of the whole gamut of human emotion, is left with the unexpectedly uplifting, highly cathartic sensation that, even when it has all gone wrong, and there is no guarantee that ‘everything will be okay’, the love two people feel can make the decision to keep on living worth every minute of the pain that this brings.