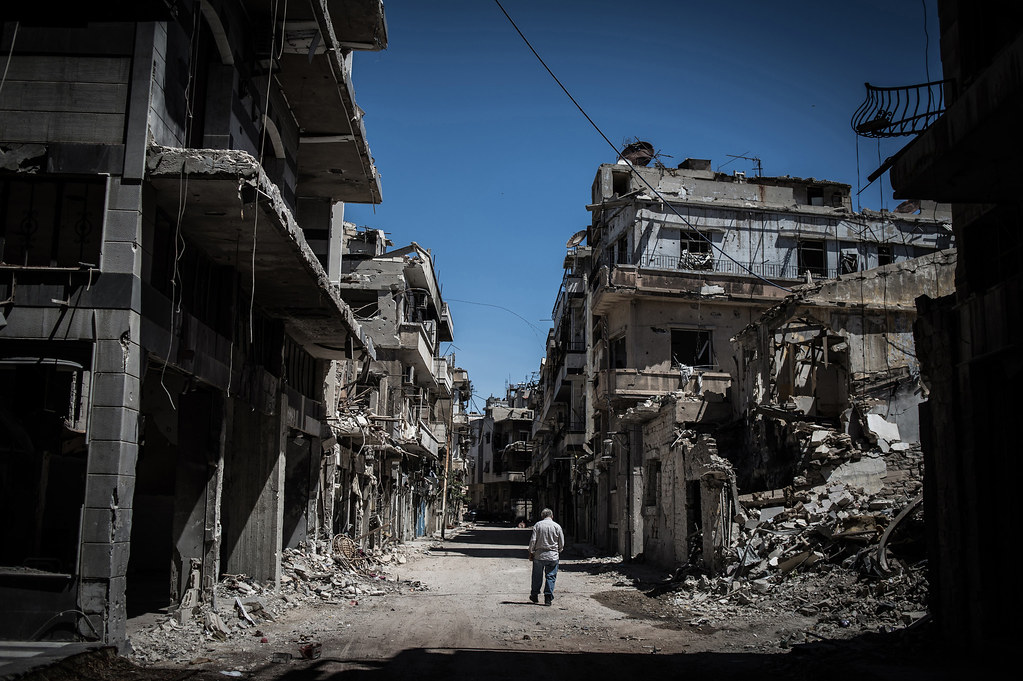 Syria is a country filled with history. It’s a middle-eastern land with rich cultural diversity, from the ruins of Palmyra to the network of towns, fortresses and panoply of ‘lost cities’ that pepper the ubiquitous sun-kissed dunes. Multitudinous peoples have formed part of the rich tapestry of historical Syria. However, behind this topographical mirage of magnificence lurks a state devestated by a decade-long civil war, and bled by a malign regime headed by a dictator, Bashar al- Assad, obstinate in his desire to retain power at any expense. The expense has been grave, and, as always, has been paid by the people.

Assad’s iron fist and cruel totalitarianism, facilitated by the insouciant Russian state’s pillaring of his power, symbolise an unholy alliance that is a fundamental threat to the core values of freedom, moral decency, and the international rules-based order. This article seeks to deconstruct the evil barbarism that plagues Syria, as well as the inadequate current global approach to Syria, whilst outlining the need for a concerted international effort to liberate the Syrian people from Assad’s blood-soaked tyranny.

The heart-wrenching plight of Syrians at Assad’s hands is emblematic of the acute threat that he poses to the basic values of freedom. Just last month, the international chemical weapons watchdog (the investigative arm of the Organisation for the Prohibition of Chemical Weapons) provided a heart-rending insight into how the state machinery systematically represses the vulnerable. It said that it has “reasonable grounds to believe” that the elite Syria Tiger Forces Corp of the Syrian Air Force was responsible for a chlorine bomb that was dropped on a town in the rebel-controlled Idlib region in 2018, which killed 12 people. A United Nations report indicated that the Assad regime was also responsible for a bomb that was discharged on the Iqra School in the Aleppo Countryside in 2013 (one of a litany of schools bombed by Assad), killing 11 civilians, most of whom were children. Such rapid aerial assaults by the army on its own people are now lamentably common in Syria, and have been since the start of the civil war.

This is the reality on the ground in Syria despite the use of these types of weapons (chemical and incendiary) on civilian populations being illegal under humanitarian international law. But should we really be surprised? Such human rights abuses and flagrant international rule-breaking is Assad’s and his allies’ modus operandi.

Millions of refugees are afraid to return to Syria because of the Mukhabarat, or secret police, which systematically torture, rape, kidnap, and kill innocent civilians for simply voicing an opinion that may be construed as dissent, or for even for merely be suspected of harbouring anti-Assad sentiment.

The impact of one man’s rapaciousness on Syria itself makes for a sobering read. As a result of Russian and Syrian air strikes and incessant artillery bombardment of cities (such as Aleppo and Homs), homes, infrastructure, and over 800 medical facilities have been reduced to rubble. Most of the more than half a million people killed have been civilians, murdered by barrel bombs and ballistic missiles, famine, sieges, and nerve gas. Not to mention the fact that the UN estimates that more than 6 million people have become refugees outside of the country’s border and another 6.7 million people internally displaced. Syrian economic output has fallen at least two-thirds since the war began which has created an impoverishment crisis. Its currency has lost 80% of its value and the UN estimates that more than 80% of the population has fallen below the poverty line with around 12.4 million Syrians “food insecure”, which is an increase of 4.5 million people in the last year alone and the highest number ever recorded.

The global response has been tepid at best. It is true that the US has consistently taken decisive action. For example, the Obama administration backed the Syrian rebels by attacking the Islamic State. The Trump administration launched a missile attack against Assad in 2017 in retaliation for yet another regime chemical attack. And just a month into office, the Biden administration launched a rocket attack against facilities in eastern Syria that the Pentagon said are used by Iranian-backed militia.

Moreover, a new round of US sanctions against Assad’s regime, and those who aid it, came into force just last year. The Caesar Act 2020 punishes all those who in any way aid the Assads, their government, army and institutions, their support networks and allies, or their business interests. The Act’s main external targets are Russia and Iran, the Assad regime’s external patrons, and the Iran-backed paramilitaries that spearhead its strike forces: Lebanon’s Hizbollah and Iraqi Shia militia. The overarching rationale for such targeting these groups has been to isolate Assad from vital strategic and military partners in order to ameliorate the impact of his armed forces domestically.

Similarly, the UK imposed its first sanctions against Syria since leaving the EU through its new Global Human Rights Sanction Regime; these so-called ‘Magnitsky-style’ sanctions (in homage to the late Russian whistleblower Sergei Magnitsky) seek to target global individuals and organisations abusing human rights. In relation to Syria, UK asset freezes and travel bans to the UK were instituted for six Syrians, including the foreign minister Faisal Miqdad, Assad media adviser Luna al-Shibl, and financier to Assad, Yasser Ibrahim. Coupled with that, the UK have adopted a justly polemical rhetoric on the international stage with the UK Foreign Secretary, Dominic Raab, sniping that “the Assad regime has subjected the Syrian people to a decade of brutality for the temerity of demanding peaceful reform.”

However, the Magnitsky-style sanctions, as valuable and coercive as they are, seem unlikely to protect civilians on the ground who are enveloped by privation, suffering, and abuse; and the upper-echelons targeted were already under some form of restrictive international sanction. It also seems to have achieved very little in deterring Assad, and arguably, the stringency of the Caesar Act actuated the demise of the Syrian currency and therefore exacerbated the impoverishment crisis on the ground as Syrian simply can no longer afford basic foodstuffs like bread. Notwithstanding that, the repeated US military interventions from the sky seem to be distant and lacking in substantive success, whilst costing innocent lives in the process and leaving many Syrians too frightened to roam the streets. For me, there appears to be no real concerted strategy or game-plan from the West, vis-à-vis Syria, when there ought to be, given how acute the crisis has now become after 10 years.

The main focus of the West in relation to Syria appears to be on the management of the refugee crisis stemming from there as opposed to tackling the causes of the refugee crisis, which is tantamount to treating the symptoms, not the cause. For example, some EU countries have recently, and arbitrarily, tightened their criteria for asylum, resulting in more asylum seekers being granted subsidiary protection instead of refugee protection. Indeed this is not isolated but indicative of an alarming trend across EU countries that are implementing policies designed to discourage and deter people from seeking asylum in their countries by stripping away the benefits. However, alas, such policies are fatally flawed by myopia; it is axiomatic that this will not address the underlying cause of why people are coming, nor does it resemble a long-term solution to the refugee crisis despite a resolution being in the international interest.

As an international community, we must recognise that the reason that millions of Syrians are escaping their countries to come to the West is because they have no choice but to leave. We must imagine a world where we feel too frightened to wake up in the morning; insecure going to work or school; and denumbed with angst in our everyday environments because of the reality that we may be killed for wanting basic freedoms. Syria and Russia together have committed the cardinal sin of stripping Syrians of the ability to live. These citizens are haunted by the omnipresent realities of life in Syria: of dead friends and relatives, blood, and war. In Syria, people exist, but they do not live. It is because of that harrowing fact that they leave.

The UN as a tool of change is looking increasingly vacuous in relation to Syria. As Russia is a permanent member of the UN Security Council, it has exercised its veto repeatedly (14 times since the beginning of the war in Syria, as of March 2020) to block diplomatic efforts of accountability. That includes vetoing, alongside China, a resolution supported by 65 countries and the rest of the security council that would have referred war crimes committed in Syria to the International Criminal Court.

The only solution to assuage the refugee crisis and bestow hope and justice to Syrians is a long-term political peace settlement in Syria, where people are once more able to regain the ability to live. Working concertedly and formulating a long- term plan with broad bipartisan commitment, as an international community, to end the conflict and help rebuild Syria with united endeavour, resources, time, and treasure; it is the morally noble thing to do. It would alleviate the Syrian people of their suffering, allow Syrians to build futures for themselves at home in lieu of making the perilous journeys across migrant routes or being exploited by people smugglers, and allow Syria to be a bastion of hope and freedom in the Middle East. But it would also be beneficial for the world as it would mitigate the influx of migrants at borders (often a politically vexed issue in the West), deliver a more stable and peaceful Middle East thus reducing the risks of vacuums of power being filled by terrorists preying on the vulnerable, which more often than not culminates in a latticework of terror groups forming, and fomenting attacks globally.
What is clear is that the current approach is not working, and we have a moral obligation to ramp up our efforts. The practical form of a long- term plan is complex and multi- faceted. What it cannot include is simply more sanctions, or greater humanitarian aid alone (although these do play their part). We, as an international community, must champion the values that we believe in, freedom and justice, and never in good conscience passively allow nations of people to capitulate to tyranny. In the words oft-attributed to the late great parliamentarian, Sir Edmund Burke, ‘the only thing necessary for the triumph of evil is for good men to do nothing’. We must do much more than nothing.