CherwellIndependent since 1920.
Columns Out of the Frame: Holbein’s The Ambassadors 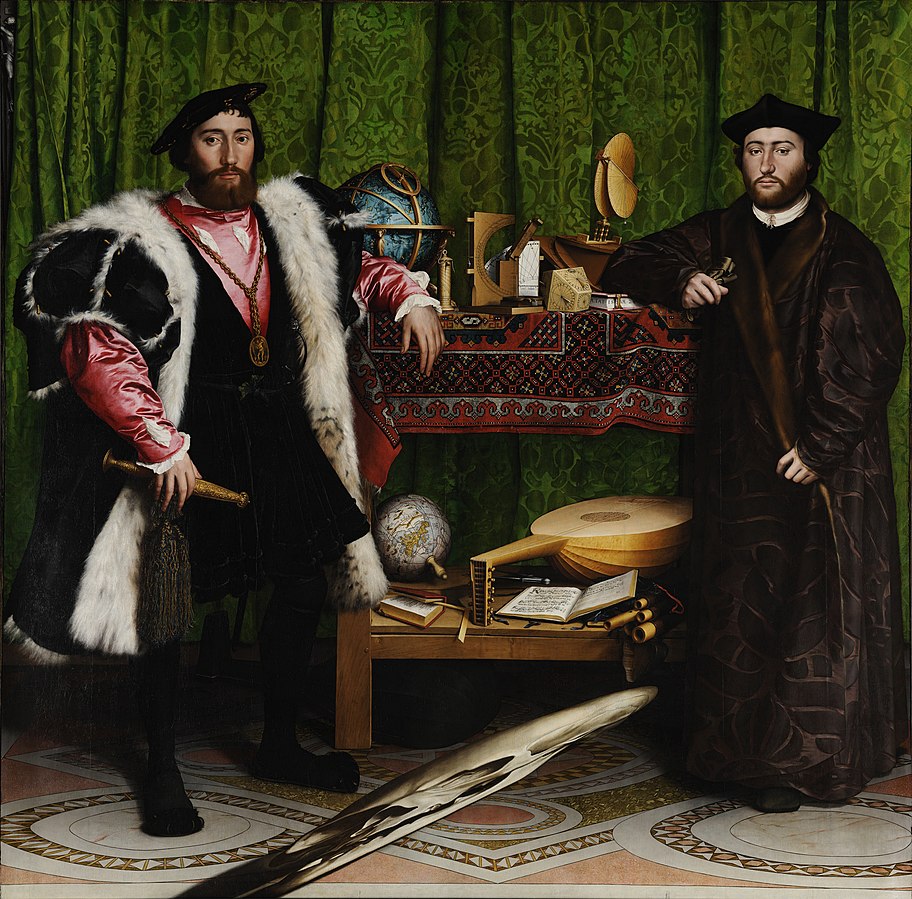 Just as the modern media exploit images to convey particular themes and rouse responses, the painters of the past were careful in choosing what to include in their works and how they arranged them. Hans Holbein’s 1533 work ‘The Ambassadors’ is an intriguing example of the importance of composition and the selection of material. What some may see as a dusty painting, a window to another, almost alien, time can actually show that more has stayed the same than we may think. We use visual art to comment upon current affairs, but also to provide themes for contemplation. Artists today strive to create work which confronts us and makes us think, but we are certainly not the first to do this. Holbein shows us how we have been doing this for centuries and gives us a fresh perspective on a piece of art created almost 500 years ago. Through Holbein and through art, we can understand that there are fundamentals to the human experience, which go beyond any cultural or technological shifts that we may encounter.

The painting is first and foremost a life-size double portrait of two men, Jean De Dinteville (left) and Georges de Selves (right), who were French ambassadors to the court of Henry VIII in the time between his divorce from Catherine of Aragon and marriage to Anne Boleyn. The world in which the painting was created was one torn by religious conflict, with the emergence of the Lutheran Church as well as Henry VIII’s own break from Rome. The work is therefore particularly powerful in its imagery of division, but Holbein has also hidden an important message in plain sight which appeals to a universal audience, like many visual works do today. The intricate luxury of the fabrics that we see is counterbalanced by a very large skull, which is painted from a distorted viewpoint, almost as if someone has copied and pasted it and accidentally squashed the image down. Why should he have wanted to include such a bizarre detail in a seemingly simple portrait? I like to think of this work as a very early example of proto-surrealist style. While it is in no way connected with such work from the 20th Century, it does foreshadow our interest in the visual abstraction of ideas and gives some modern feel to the work. The skull is not apparent upon first glance, only becoming visible once you begin to walk past the painting, looking at the canvas side on. We are confronted first with extreme wealth, with its silks, golds, and furs, but as we move on from the work, we are left with the bitter aftertaste of our own mortality, through the theme of ‘memento mori’, the Latin motto translating roughly as ‘remember that you are mortal’. This motto has travelled alongside humanity for millennia, and can be taken in several ways, regardless of whether one follows religion or not, by reminding us that material wealth is transient, while death must be embraced by all, a philosophy that resonates particularly in a world where so many material goods are readily accessible and essential as a show of one’s attributes.

The current affairs of 16th Century Europe are there for people to see, perhaps in a subtler way than is done today, but the effect remains comparable. The green curtain hangs heavily in the background and if you look closely at the top left corner, you can see that it partially veils a silver crucifix, once again creating a barrier between the earthly and celestial realms. It seems that religion is being swept into the background and covered up, yet it is not entirely neglected. On a superficial level, the partially covered crucifix reminded me of the badly hidden Coke bottles seen in Trump’s recent pictures, following his public boycott of the brand. Both cases show the failed attempt to separate oneself from a particular affiliation and their unavoidable presence. The Catholic Church was one of the most widespread institutions of control in the 15th Century, while Coca cola remains a brand with a world-renowned following.

The secular and religious realms see further separation when we look at these many objects: the upper shelf carries a globe of the heavens, a star chart with the constellations as well as several devices for measuring the sky. The bottom shelf by contrast has a globe as well as some book and musical instruments, showing a few pursuits of the earthly world. I have mentioned that religious division is key to this painting and the level of detail achieved to convey the theme is truly remarkable. The red book turns out to be a mathematics manual, which appears to be open on a page about division. Furthermore, upon careful examination of the lute, we can see that a string is broken, meaning the instrument is out of tune, is this a nod to the political discord of the time?

Despite the contextual detail and symbolism, we cannot help but return to that all-encompassing message about the prevalence of death. It is the universal theme which confronts every viewer of the painting and resounds loudly through the work’s composition, which is itself based upon a scene from the medieval ‘dance of the dead’, where Death triumphs over all.  But we do not need to know this particular reference to understand what Holbein is trying to tell us here, since he taps into perhaps the greatest of human contemplations: the inevitability of death, which gives our life meaning, while also rendering the value of our material goods rather empty. Holbein is not telling us to live without any such possessions and reject all material wealth, rather reminding us to take such acquisitions into context, while remembering that there is more to life than the physical. This is just as pertinent to the context of the religious revolution of the Middle Ages as it is to today’s materialistic culture. Paintings such as this one show us that art can remain relatable beyond the time in which it is created. We draw our own readings from the piece and apply them to our modern world, only to realise that similar concerns have existed for centuries.