After the almost religious repetition of platitudes like “pre-season testing isn’t indicative of race-pace” or “teams never reveal their hand until qualifying”, the Bahrain Grand Prix, the first of Formula One’s busy 2021 schedule, finally provided some answers. And what answers they were.

Years of unequalled dominance by Mercedes seemed to be hanging in the balance after a shaky run in pre-season testing. Literally, shaky. Hamilton and Bottas both failed to keep the rears of their cars under control following the new regulations introduced this year by the FiA, aimed at reducing downforce. Red Bull, ever the stoic pessimists, downplayed their advantage in the media running up to last Sunday; behind the scenes, they must have been licking their lips at the opportunity that had presented itself. This is the first time in the hybrid era that any team other than Mercedes look like real contenders for the Constructors Championship.

If the Bahrain Grand Prix is indicative of the races to follow, we are in for a hell of a season.

Max Verstappen qualifying in pole position by a hefty four-tenths of a second, with some floor damage, was the first real, trustworthy indicator that Mercedes’ tyrannical dominance might be wavering. Hamilton and Bottas had to settle for starting in second and third. An exciting podium race was promised by this subversive qualifying result, and I don’t know any F1 fan who wasn’t happy to see the pre-season pace of Red Bull convert itself into actual, true, Mercedes-weren’t-just-sandbagging pace last weekend.

The Grand Prix itself was, undoubtedly, one of the most exciting we have had in the past few years. Couple this with the fact that the exciting parts of it were often occurring at the front of the pack, rather than in the midfield teams (as was the case last season) and it’s no wonder that feverish whispers are stirring up and down the F1 paddock. 2021 may just be the year the hybrid era has been waiting for.

Various strategic shenanigans, undercuts, tyre-wear dramas, and contentious track limits decisions all played their part in the race for first between Verstappen and Hamilton. The last 6 laps of the race were particularly tense. Verstappen, within Hamilton’s DRS range, regularly came within touching distance of an overtake. He did, at one point, manage to edge ahead, but had to go beyond track limits at turn 4 to do so. The FiA ordered him to give the position back, and a twitch of the steering in a later corner meant he fell out of touch with Hamilton for just a brief moment, but a brief moment long enough to grant Mercedes the race win. Bottas, in the meantime, was, boringly and unsurprisingly, miles off Hamilton’s pace. P3 was always where he would finish.

The track limits decision from the FiA is a contentious one and certainly needs clarification before future races. Turn 4 is easier and faster for the drivers if they run wide, and so many of them did exactly that in pre-season testing and free practice. For qualifying purposes, the FiA ruled that drivers could not run wide: any lap time where the driver went too deep in turn 4 would be deleted. Simple and clear.

The race rules, however, are far murkier: drivers can run wide in turn 4 as long as it does not give them a ‘significant advantage’. Obviously, in the case of Verstappen, an overtake completed by running wide is a significant advantage, and you are never allowed to overtake by leaving track limits. The murkiness of this ruling though, comes from the fact that Hamilton ran wide on 29 of the 56 laps. Why would you do this unless it gave you a significant advantage? Presumably, this gave Hamilton a few tenths over the course of the race, a few tenths that ultimately decided whether it was Red Bull or Mercedes on top of the podium. A judge would blush at the wiggle-room one can find in the term ‘significant advantage’ and so the FiA will need to clarify this for future races or risk descending into farce.

In other parts of the field, teams and drivers seemed to either exceed or fall short of expectations; no team had the weekend go fully to plan. McLaren had a solid start to a season where they will look to defend their constructors’ third of last year, with the additions of a Mercedes engine and unique diffuser (I don’t know what it does either, don’t ask, I just know that it’s important) combining to make an incredibly competitive car that, on the right day, might even be up there for podiums and wins. Ferrari surprised everyone with the decency of their pace. Indeed, Sainz had some of the best racing of the day: his three-way battle with Vettel and Alonso was redolent of the wheel-to-wheel drama that occurs in lower formulas where downforce isn’t as important, and the cars are much niftier. Conversely, Aston Martin, the team around which there was the most hype in the off-season (in part due to that erotic green colour scheme which is truly gorgeous) had an atrocious weekend. Vettel finished god knows where after rear-ending Ocon (Alpine) because he was attempting a one-stop strategy (the only team to attempt this) and Lance Stroll finished P10, only picking up 1 point for a team which last year had several podiums.

Without question, though, the race for first was RedBull’s to lose, and they managed to lose it. They weren’t helped by Perez’s difficulties (though he did have a stormer to come from dead last to 5th by the end of the race), but after two years of the second driver not being up to pace, one would have thought they could manage alright with only one car in the mix. There are no excuses: they had the faster car but squandered their own chances. Strategic errors, underestimating the Mercedes pit-strategy (and so choosing not to cover it by pitting early), and driver error, failing to close the gap to Hamilton quickly enough and that twitch of the steering which will no doubt haunt Verstappen’s for weeks to come, are what lost the race.  It was experience and grit that won it for Mercedes. It was the driver, not the car.

For some, this will be a disappointment, a bad omen of the season to come, an indicator that things, contrary to what we all wanted to believe after testing, might be similar to how they have been in the past. That is a little too pessimistic for my taste, not least because Bahrain has historically been a Mercedes stronghold. Looking forward to Imola in a few weeks’ time, the characteristics of the race will be of a decidedly different, more Red Bull shaped, nature.

Even if that weren’t the case, and Imola too were a Mercedes circuit, when was the last time we could say, in dry conditions, that a driver, and not the car or good fortune, won the race? When was the last time Mercedes were out-qualified by nearly half a second, by a damaged car? If this is a taste of the season to come, I cannot think of a more exciting year in recent memory to be a Formula One fan. Red Bull, who have constantly teetered on the edge of being true contenders, finally seem to have uncovered whatever issues were holding them back, while Mercedes have been suitably hindered by the FiA, to make this year truly competitive.

What a time to be alive. It is a shame we have to wait three weeks for the next race. 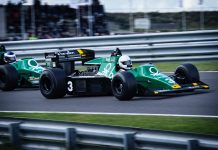