Cherwell News reports on the campaign efforts against the new Oxford North development. 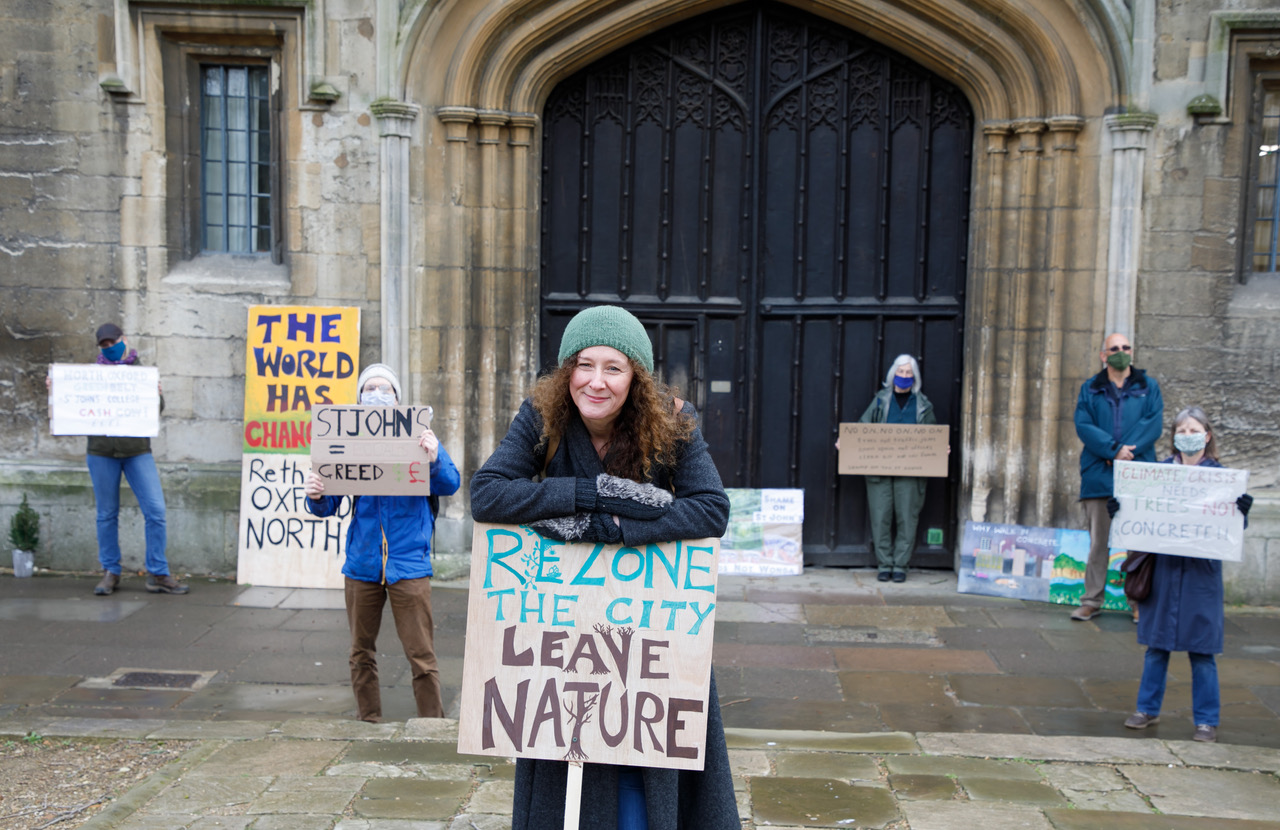 Wolvercote residents led an hour-long socially-distanced protest outside St. John’s College on Friday to show their displeasure with the college’s plans to redevelop the greenfield land which it holds in North Oxford. Attendees placed placards outside the College’s main entrance on St. Giles’ and stood to chat to passers-by about their goals. The Oxford North project, overseen by the College’s Thomas White Oxford company, took its first steps in 2007 when the ‘Northern Gateway’ site was proposed by Oxford City Council in its ‘Emerging Core’ strategy and adopted in 2011.

An Area Action Plan was then subsequently launched by the Council in 2015, which insisted “the development of the Northern Gateway offers the opportunity for existing and new firms to relocate, and to ensure that Oxford’s economy continues to grow for the benefit of the City and as a vital component in the growth of Oxfordshire more widely.” Thomas White Oxford and St. John’s College, in a joint statement in the build-up to the protest on 19 March 2021, defended their “proposals, [which] realise the vision… for Oxford North to [become] a new district for the city.”

This vision is not shared by local residents of Wolvercote, which directly borders the proposed development. Cherwell spoke to the leader of the protest group, Carol Peaker, at the protest on Friday. Peaker previously lectured in the Department for Continuing Education at Oxford. She noted “the community has been fighting Oxford North for years”, but that their cause had gained more urgency and timeliness during the pandemic. “ The world has changed… Oxford is going to be full of empty office and retail space, people are working from home.”

In the College’s response to the protester’s manifesto, they stated that “any of the concerns raised by the Wolvercote group have been addressed during the lengthy processes of public consultation and public examination that have taken place in relation to this proposal over the last decade.”

Peaker disagreed: “I think people felt during consultations that they were just making lip service to consultations. When I talked to people in Wolvercote, the feeling is this sense of despair and powerlessness, against the might and wealth of St John’s College. They were just going to greenwash everything and run roughshod.”

Peaker’s belief has been reinforced through her communication with the College: her first letter, with over 200 signatories, was responded to by the developer, rather than the College directly. Though a second letter was sent and responded to by former John’s bursar Andrew Parker, residents resorted to protest as they believed this was the only method that would enact meaningful change.

The central concern for the protesters is the destruction of the greenfield land. Nonetheless, the college stresses that their proposal will create “three new public parks totalling 23 acres and planting 1,000 new trees”.

This is received more cynically by Peaker. “What they’re saying about the parks and things like that, if you look at the plan, most of the proposed ‘parkland’ is right beside the A34 – not really not the place where you want to take your kids to because it’s thunderous [with traffic].”

Peaker called for St. John’s students to join “what is…a real seismic change in thinking around development. We live on an island with a finite amount of incredibly precious green space – we have to stop building on it, because development cannot go on forever without imperilling our future… We need trees much more than buildings, more than unnecessary office space. I would like St John’s College students to tell their college how they feel and to understand it, viscerally.”

The College has started enacting its plans, cutting down “historic” hedgerows as part of licenses given by Oxford City Council. Despite these cuttings being used as biomass fuel, as noted on the Oxford North website, this proved to be a point of consternation for Peaker:

“The community is devastated at the moment, because they said that they were going to do some vegetation clearage. They proceeded to dig up quite a number of ancient hedgerows and to completely destroy a nature walk that has been loved by the neighbourhood for generations” She observed that traffic noise from the A34 and A40 has worsened as a result, and that “we’d like [the hedgerows] replanted.”

In response, Thomas White Oxford pointed towards the project’s “site-wide ecology strategy that seeks to draw together the planting strategy with the Sustainable Drainage Strategy (SuDS).” This includes planting new hedgerow, creating further habitat and biodiversity opportunities to support the native birds, bats, and insects, and retaining broad-leaved trees.

When asked whether she thought that her protest would be successful, Peaker responded “I intend [it] to be”. A response to the protest has been issued, and St. John’s has emphasised its commitment to biodiversity and to creating green spaces alongside the redevelopment of its lands.

A right of response has been provided to St. John’s College.