Sasha Mills speaks to Grace Beverley about her entrepreneurial achievements with sustainable fashion and her experience as a woman in the world of business. 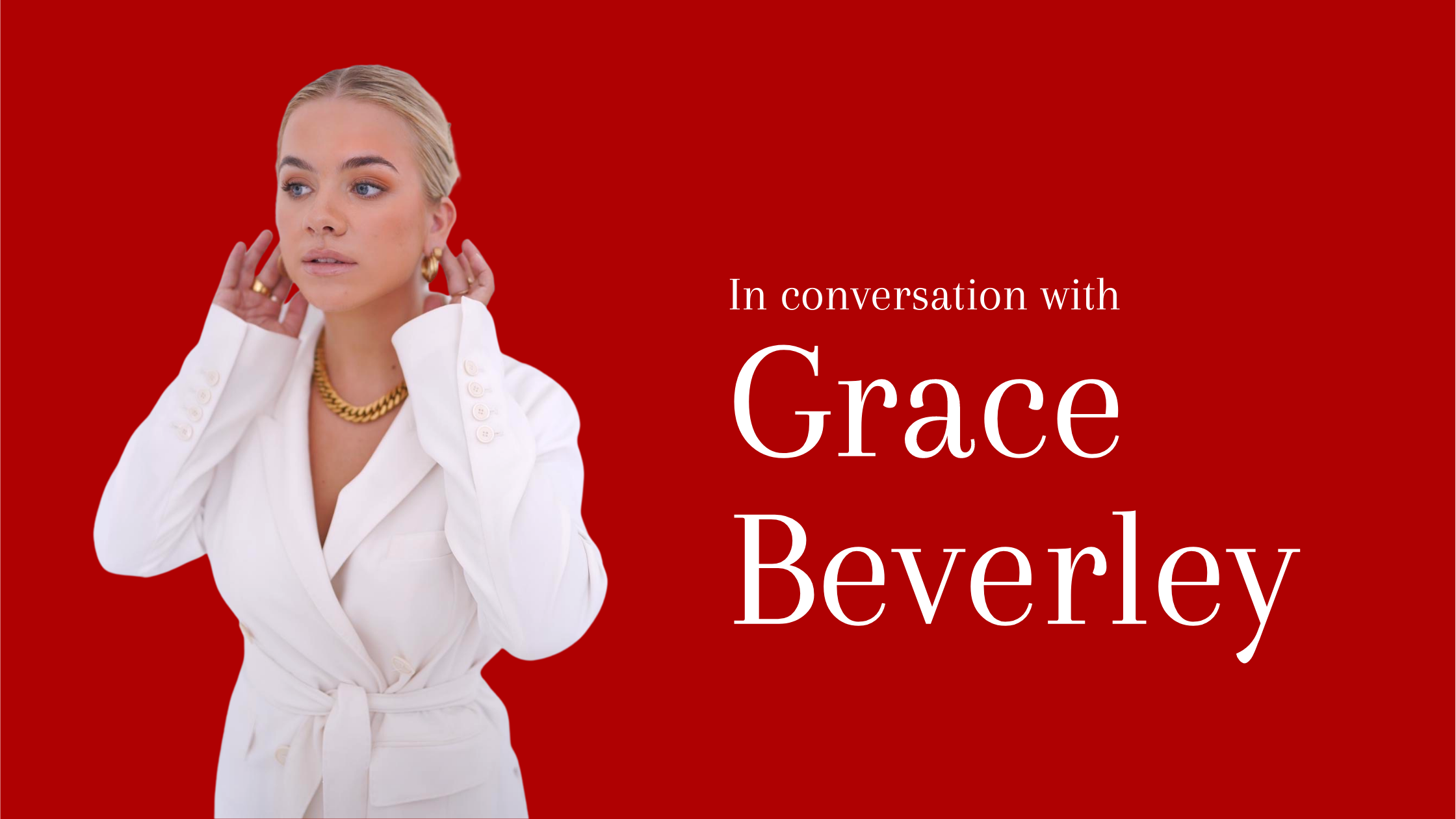 Grace Beverley is possibly one of the busiest people I’ve ever met. The day of our interview, she posted a photo of the day’s schedule, and I was wedged in amongst almost non-stop meetings. It’s not hard to see why her schedule is so packed. Currently, she holds the CEO and Founder role of two companies: TALA, a sustainable fitness-wear brand, and Shreddy, a fitness app and equipment brand. This means that her main day-to-day job is making executive, top-level decisions.

“It’s quite a traditional CEO role while having the untraditional, unorthodox version of being CEO of two companies.” She sees her main role, however, as being an entrepreneur; “That is what I spend 90% of my time doing.” Both companies have seen enormous success, and a report in Forbes earlier this year suggested that TALA has already generated a turnover of over £5.2 million (and counting). Only a year after graduating, she’d already made it onto the Forbes 30 under 30 list for Retail and Ecommerce.

Given that she started her two businesses while still studying for her degree at Oxford, she’s clearly no stranger to time-management, which features heavily in her new book, scheduled to come out next year: “The book is aiming to provide a productivity blueprint for the next generation.”

Still, it aims to go beyond just self-help. Burnout has become a debated topic of conversation over the last few years, and last year, Anne Petersen’s essay for Buzzfeed, “How Millennials Became the Burnout Generation” went viral. In it, Petersen describes the experience of internalizing “the idea that I should be working all the time,” an experience that she categorises as a distinctly generational one.

While Beverley falls just on the edge of being a Millenial, her new book takes on some of the ideas that Petersen mentions in her essay. “The book was inspired by two different ideas of our generation as both the snowflake generation and the burn-out generation. So from one side we’re seen as, we like to cut corners, we don’t want to be in a corporation for 40 years before we live the life that we desire. But then on the other side, we’re this burn-out generation because we monetise everything we do, and every free hour is kind of a side hustle; we’re always working.”

“How we can be seen as two different things, and how we can identify with two different things at the same time when the idea of success is not necessarily changing that much with the times, even if we think it is, and it’s leaving us feeling lost.” Throughout her new book, Beverley wants to tackle these contradictions.

If anyone’s qualified to talk about this, I think Grace Beverley might be. Writing a book alongside holding a CEO role in two fairly new companies is certainly no easy feat. When I asked her how she managed it, she gave me quite a simple answer: “I plan to the minute, is life at the moment.” “I find that planning is one of the biggest benefits of even just stress relieving, and being able to even see yourself being able to complete what you want to complete.”

She also credits the support of her teams, who appear like a close-knit family in the occasional Instagram posts they feature in. Scaling up has been essential to managing the load, and while the businesses’ teams are still small, they’re growing at a fast rate.

Although her achievements so far are monumental, that doesn’t mean that Beverley hasn’t struggled with self-doubt. “I think that one of the most important things is knocking down your own self-doubt first and working out if that’s bleeding through into what you think other people’s perceptions of you are.”

“What I realised after a while […] was that actually the most overarching kind of challenge, and obstacle for that [being taken seriously] was actually with myself. And I was very much creating this feeling for myself because I was so preoccupied with that.”

“I find that the best way to combat these things is just to do. You can doubt yourself, or think that people think something of you all you want, or you can just get on with the work, and kind of let the success of it speak for itself.”

One focus that has been key to Beverley has been hiring women, and creating safe spaces for them to develop professionally. She highlighted funding as a key issue for women in entrepreneurship: a study by Beauhurst suggested that in 2018, only 16% of equity deals went to female-founded companies, and the Alison Rose Review of Female Entrepreneurship noted that only 13% of senior people in investment teams are women. Despite this, she also thinks that entrepreneurship creates opportunities for women in business that traditional roles may not, such as the ability to forge your own path.

In spite of the difficulties that face many female founders, Beverley remains insistently positive. I was curious to learn more about the challenges that having a significant online presence alongside her businesses may have posed, but for Beverley, this is a source of opportunity more than anything else.

“I think if I were to say it’s made my current job harder, I would be very much looking at the negatives, considering I’ve also been able to lead on a huge amount of pre-existing audience spaces with potential customers.” She also pointed out that despite the challenges of being a female founder, “I’m also an Oxford-educated white woman, so I’m going to have huge privileges elsewhere.”

While her businesses may have sprung from her previous status as an influencer, Beverley has taken a notable step back from her social channels and Youtube over the last year, moving to the occasional Instagram post, with a heavier focus on entrepreneurship than previously.

“I realised that actually I didn’t have any place in my life that I wanted to be highly publicised. And I kind of just wanted to focus on growing the companies, and that being my job, and that is my job.”

“I think what’s interesting is that in any other job you’d be able to change your job, and there’s very little ‘oh, you owe it to this to stay,’ whereas with social media that can be slightly imposed based on how much people supported you.”

To Beverley, stepping back from social media is nothing more than a career change. “We are not even necessarily used to influencer culture yet, and so of course we are going to perceive it differently when it comes to people reinventing themselves in any way.”

She also credits stepping back from social media to other positive changes, including being more sustainable in her personal life. “There’s this idea that this militant sustainability is the way forward, which actually creates a huge barrier for entry and gatekeeping for people who want to be a bit more sustainable. So I think for everyone, it should very much just be about making sustainable choices, especially in areas that you can maintain.”

Being offline, she says, has taken the focus away from living up to these standards, and instead she’s able to focus on her own decision-making: “How can I make the best decision here? If there’s a trade-off, how do I make that work?”

Sustainability is also at the heart of Beverley’s businesses. Most of the products produced by TALA focus on up-cycling fabrics that would otherwise go to waste, their Zinnia leggings, for example, are produced with 92% up-cycled Polyamide, and purport to “save over 40 litres of water and 2kg of CO2 compared to non up-cycled Polyamide.” The brand is admirably transparent, and in a video released last year, Beverley even took her followers into one of the factories that they use.

She emphasised, however, the complexity of this sustainable approach. “Sustainability isn’t just about, for example, recycled clothing; it’s about everything, from how you dye fabrics, to how you ship things over, there are so many different aspects of it. And I think that it is really, really important for the consumer to be aware of that.” Some fabrics, such as elastane, can only be recycled a certain number of times, so each decision that Beverley and her team make involves weighing up the balance between sustainability and maintaining the quality of the garment.

On the other hand, an online product such as the Shreddy app doesn’t have any direct sustainability implications. Launched in 2019, Beverley told me that both of her businesses have seen steady growth through the pandemic, which she partially credits to their online-only, direct-to-consumer model.

This model has seen enormous growth over the last year, with one study suggesting that sales for D2C businesses in the US has seen a 24.3% increase from 2019 to 2020, likely in part due to the closure of physical shops, as well as the ease of online shopping.

This doesn’t mean that the pandemic hasn’t impacted Beverley’s two businesses. The sampling process for new products had to be pushed back for several months, as it requires high levels of international collaboration, which means that many of the TALA collections coming out over the next few months have been delayed from earlier in the year.

Now, one of Beverley’s biggest priorities is working on crisis management to prepare for the future. “It’s quite interesting going into what might be seen as a second wave to look at how we change, how we act [in comparison to] the first time.”

“Whether you’re making more money or not, crisis management is always going to take up a huge amount more time. So I feel particularly kind of heartbroken for the companies that are probably working above their heads.”

Still, it seems that Beverley’s companies are continuing to evolve, despite all the challenges they face. In the weeks after our interview, it was announced that she was merging two of her companies, rebranding her fitness equipment company B_ND to fall under the umbrella of Shreddy. In an Instagram post, she told her followers that “rebranding the rest of the business & reframing towards a tech-forward business model made sense.” It doesn’t seem like much is capable of stopping Grace Beverley from continuing to push forwards.