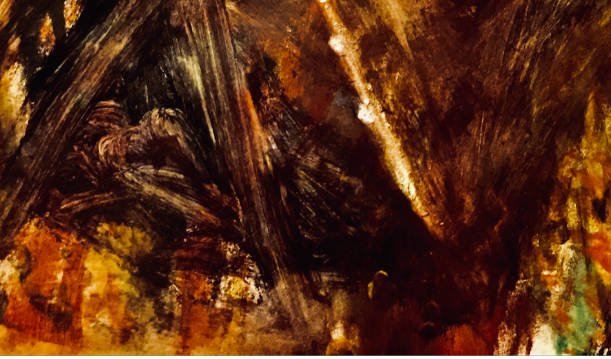 A warrior of Palestine
Traversed with a Cross for sword,
From Babylon to Jerusalem,
Until he spoke not word.

His nascent thought was born again;
Yet, dragging gladly back,
He found his journey onward going
Under a sky like a sack.

The metered step he paced withdrew
Into itself, at last,
And the eyes in his head, all glassy through,
Looked into their thoughtful task.

The Cross that scratched against the ash,
He would not stop to clean
For, sparking on the soil or Nile,
It taught him that he lived.

Aye, if it still was sharp enough,
Then further forth he tramped
To slay the soul that cursed him thus:
Forever-on, to stamp.

If Cross had weight to strike a head
Or numbered nails to spike,
Or sharpened stake upon the end
To gouge a throat, he’d try it.

If arms had power to strike a blow,
Or legs the hate to sprint,
The warrior who used them all
Would waste them till unbent.

Shame that the Cross was never light
Throughout his glaring day!
It grew a vine to gnaw his sweat
And prophesied defeat.

So, when arrived so very late
Upon a view not far
From the gateways out of Nazareth,
It was a sword no more.

The Cross had foe to pierce, yet still
It stayed in its warrior’s hand
To grow as dense in vengefulness
As him who dropped it now;

Till meeting sand, it sturdied there
And sprouted as a tree
That one of many seedlings spare
Had strived its life to be.

Here then, the blood-tired warrior fled
To lie within a cave,
And watch the Cross begin a fire
That smouldered on his gaze.

Retiring, the warrior
Saw men at arms and mad,
And criminals carried down and up
And the boil of the Cross’s blaze;

Then, glimpsed, at last, with pale a wroth
Among the crinkled leaves
His foe, whose name he had forgot,
In a garment redly greased;

And by the time the night arrived,
He could not help but start
To wonder how the upturned blade
Had turned against the lord.