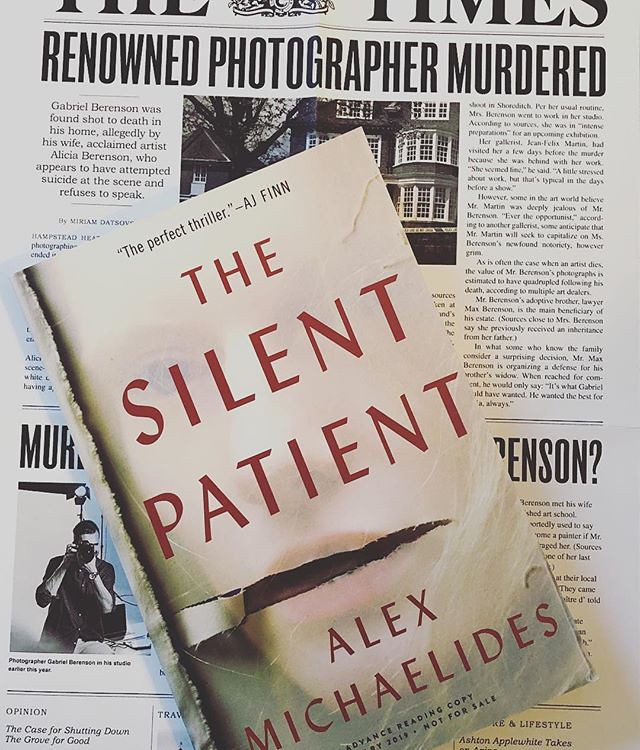 Alex Michaelides’ The Silent Patient is the must-read thriller of 2019, an instant New York Times and Sunday Times #1 bestseller. Stephen Fry described it as “absolutely brilliant”, and it took home the Goodreads Choice Award last year for best mystery/thriller. It also won the prize for my worst read of 2020 so far, but I’m clearly in the minority.

If you’re looking for a good book, I’d give this one a miss, but I will it give it one thing- The Silent Patient is accidentally hilarious.

Much of the hype around the thriller comes from the synopsis, which, admittedly, is pretty engaging. Talented artist Alicia Berenson shot her husband five times in the face and hasn’t spoken a word since – our protagonist, Theo Faber, wants to find out why.

Unfortunately, this is as good as it gets.

Theo is ostensibly a forensic psychotherapist, which supposedly facilitates his fascination with ‘saving’ Alicia. Instead, it seems to licence him to go around like Sherlock Holmes, ‘investigating’ Alicia’s background by asking her friends and family inappropriate questions. Theo clearly never learnt about patient confidentiality, but other than getting a slap on the wrist from his superior, no one really cares.

Luckily for him, Theo doesn’t actually have to do any detective work, because every time he talks to someone, they just so happen to immediately give something away. Reading these interactions felt like playing Professor Layton on the Nintendo DS (anyone?). Theo would talk to the receptionist, who would say something like “If you want to know about Alicia, talk to her cousin”, and off he’d go to see the cousin and do some more illegal detective work. He’d speak to the art dealer, who would look shifty and say “I don’t know anything”, and our self-styled Hercule Poirot would make the mind-blowing realisation that “There was something he wasn’t telling me.” Michaelides might have been more subtle simply by writing wink wink, nudge nudge.

Theo is introduced with a seven-page ‘info-dump’ in which he recounts his entire life story. The bits that are relevant to the plot can be neatly summed up in one sentence; Theo had an abusive father, took an overdose at university, and from then on, started seeing a therapist who in turn inspired his own choice of career.

But don’t worry, there’s one part of Theo’s life that Michaelides saves for a later ‘info-dump’ – he has a wife. The reader then has to endure nine pages of the author hammering the point home that his protagonist is really into his wife, because – spoiler! – the entire plot hinges around this fact.

Both of these are classic examples of telling and not showing the reader what they need to know, and typifies the author’s writing style. Rather than trusting the reader to pick up on clues, Michaelides inserts long and jarring explanatory passages. There are no carefully dropped hints, little things that amount to an overall impression of what the author wants to convey. Not only are these passages like a massive flashing neon sign saying “Look at this!”, but they don’t make the story believable. Theo is meant to be so cut up over his wife cheating on him, but since we’ve just been told that he loves her, we haven’t seen it, we can’t feel any empathy for him. It doesn’t help that his way of dealing with this is to go back to his old therapist (who conveniently lives nearby) and ask her what he should do. Her response is “dump her”, because apparently, good therapists don’t exist in this book.

Every other character in the book is cartoonishly two-dimensional. There’s a tacky, narcissistic woman whose name is literally Barbie, the handsome but arrogant Christian, and the “blonde, pretty, rather petite” receptionist, Tanya. It won’t surprise you to hear that the owner of the art gallery is a Parisian named Jean-Felix. Of course, thrillers aren’t known for winning characterisation, but such a lack of imagination is really quite impressive.

As if it weren’t already suffering, Michaelides injects multiple unnecessary metaphors and similes into his prose. Some of the better ones are merely redundant, but some are frankly ridiculous. I genuinely laughed out loud when I read: “Its icy cold inside, like climbing into a fridge”, as if everyone reading will think ‘Ah, yes, now I think about the last time I climbed into my fridge, I really know what he means.’

It makes for an important lesson, though. Creative writing at school taught us that if you packed as many metaphors as you could into your work, it would be automatically better. The point The Silent Patient makes painfully clear, though, is that this just isn’t true. Similes and metaphors are meant to be used only when the likeness drawn can make the image or sensation more vivid in the reader’s mind.

Every human being has felt cold; it’s not difficult to imagine. We don’t need to visualize climbing into a fridge to understand how cold it is! Even if Michaelides really wanted to emphasise how cold the cafe was, there are a thousand similes that not only make more sense, but are also much prettier. It brings us back to this fundamental lack of imagination. If (like on Family Fortunes) 100 people were asked to name something cold a fridge would be one of, if not the most, popular answer.

There were also some serious inconsistencies in the setting of the novel. Despite it taking place in the UK, multiple characters used the word ‘shrink’, and Gabriel, Alicia’s husband, just so happened to have a gun. The clunky and incredibly tenuous explanation for this was the basis for another eye-roll moment; Alicia, who conveniently keeps a diary leading up to the murder, happens to have an argument with Gabriel about the gun. She writes in her diary that it was an old rifle from his father’s farm.

Why would Alicia, who is married to this man and has clearly had this argument with him before, write down the entire conversation and the reason for him wanting to keep the gun? Michaelides employs another of literature’s most cringe-worthy tropes; the journal as a narrative style. It’s way too handy that Alicia writes this in her diary, so much so that it is easily exposed for the poorly disguised plot device that it is. Need to explain away something improbable? Whack it in a diary entry, no one will notice.

The other huge selling point of The Silent Patient is its ‘shock twist’, and I kept reading in the hope that the big reveal would bring everything together. It did in part mitigate for some of the insanity going on, in that it somewhat explained why Theo was such a terrible therapist. Things started to make a bit more sense, but it wasn’t enough; there remained some gaping plot holes, and I found myself feeling a bit cheated. A good twist brings all the loose ends together, building on countless little hints dropped throughout the rest of the book. I shouldn’t have to wade through 317 pages of absurdity before everything starts to make even a little bit of sense. Michaelides’ twist had very little buildup, rendering it unbelievable when it actually happened. I won’t give away anything here, but it’s safe to say I was left confused and sceptical.

The Silent Patient isn’t meant to be a work of literary genius, and that’s alright. Most thrillers are fun and gripping, a good holiday book, which is the kind of read I was looking for. Novels don’t have to be complicated or profound to be fantastic. But as readers, we deserve more than what Michaelides gave us: lazy characterization, clunky writing, and a lame twist.

If you’re looking for a good thriller, skip The Silent Patient and read Marisha Pessl’s Night Film, or Stuart Turton’s The 7 ½ Deaths of Evelyn Hardcastle. But if you want a laugh or a lesson in how not to write a book, Alex Michaelides has you covered.