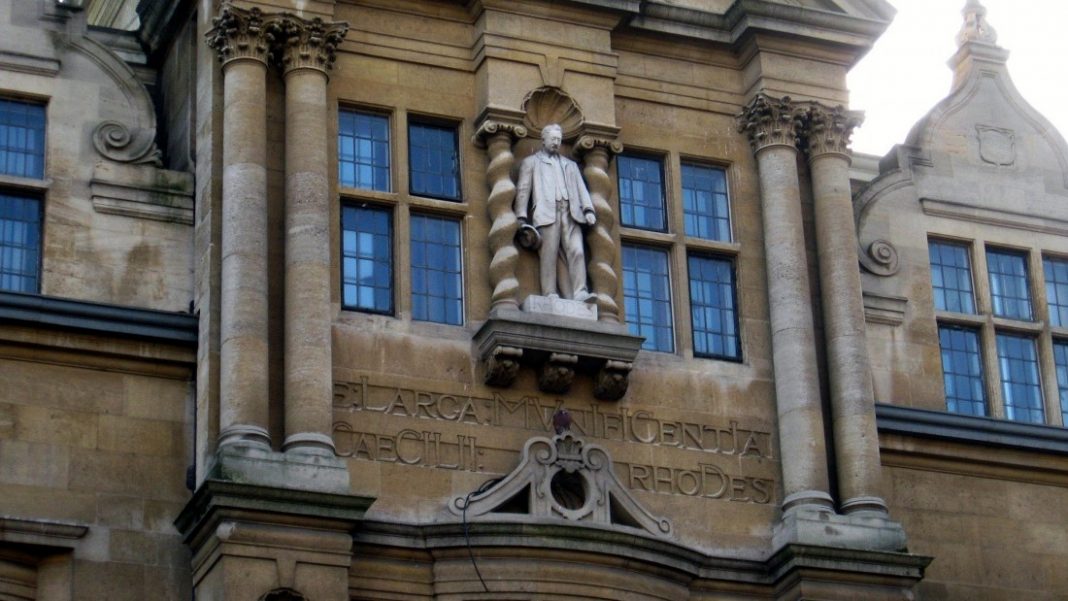 Rhodes Must Fall Oxford continues to campaign against the statue of Cecil Rhodes, demanding a definite removal in 2020, following Oriel College’s announcement that its independent Commission of Inquiry will not submit its final report until January 2021.

Oriel has stated that the Commission “has license to consider a full range of options for the statue.” The Governing Body voted in June to support the removal of the statue.

RMF Oxford’s recent action has been ‘Freedom Summer’, a series of protests taking place around Oxford. It also emailed all heads of colleges requesting that they contact Oriel to demand that the statue is removed in 2020 and is covered until its removal.

RMF Oxford have so far only received a response from Somerville College. The head of Somerville, Janet Royall, told RMF Oxford that she welcomed the Independent Commission of Inquiry.

Somerville College’s Governing Body stated on 17th June that they welcomed “the decision by Oriel that they wish to take down the Rhodes statue.”

RMF Oxford noted in its communication to heads of colleges that so far only Baroness Valerie Amos has been outspoken against the statue. Baroness Amos is the new Master of University College, and is the first black Master of an Oxford college.

Amos told BBC Breakfast: “We shouldn’t airbrush history, but I don’t think you need a statue of Cecil Rhodes to help you to have a conversation about that history. I would take it down.

“This is a man who was a white supremacist. An imperialist. He founded a company that made money through slave labour in the mines, and you’re telling me that we have to put up a statue of this person, glorify their memory to have a conversation about our history and the messy complexity of that history. You don’t need a statue.”

Heads of colleges signed a letter in June expressing their support for Black students and acknowledging the “collective failures to address attitudes and behaviours which amount to discrimination”.

This was in response to an open letter, written by Common Ground Oxford and signed by over 10,000 people affiliated with Oxford University. This letter stated that “the University has made only inconsequential inroads into tackling the material legacy of imperialism,” noting that the statues of Christopher Codrington and Cecil Rhodes still stand in the University. Rhodes was not mentioned in the University’s response.

RMF Oxford said: “We have heard from several loud voices at the University (Oriel, VC and Chancellor) who have taken to the press to either delay efforts to decolonise Oxford or going so far as to ventriloquist anti-oppression icon, Nelson Mandela, in an effort to silence the movement.

“There has been a deafening silence from heads of Oxford colleges on the issue of Decolonisation, specifically denouncing white supremacy and the veneration of white supremacist symbols at Oxford. Last week we sent a letter to all heads of college imploring them to break that silence, like the first Black woman Master (Baroness Amos) has done. We have been met with out of office responses, silence or avoidance.”

In the letter to heads of colleges, RMF Oxford wrote: “We believe that the issue of Rhodes has come to be a stain on the fabric of our academic community. The persistence of his uncritical adornment of Oriel College threatens to tear at the delicate fabric of inclusion and democracy woven together by decades-long efforts of numerous people across the Collegial University. The time has come to take bold steps towards living the values of our University and the global community.”

Oriel College told Cherwell that the College will not take any action or make any statements regarding the statue until the Commission has completed its work.