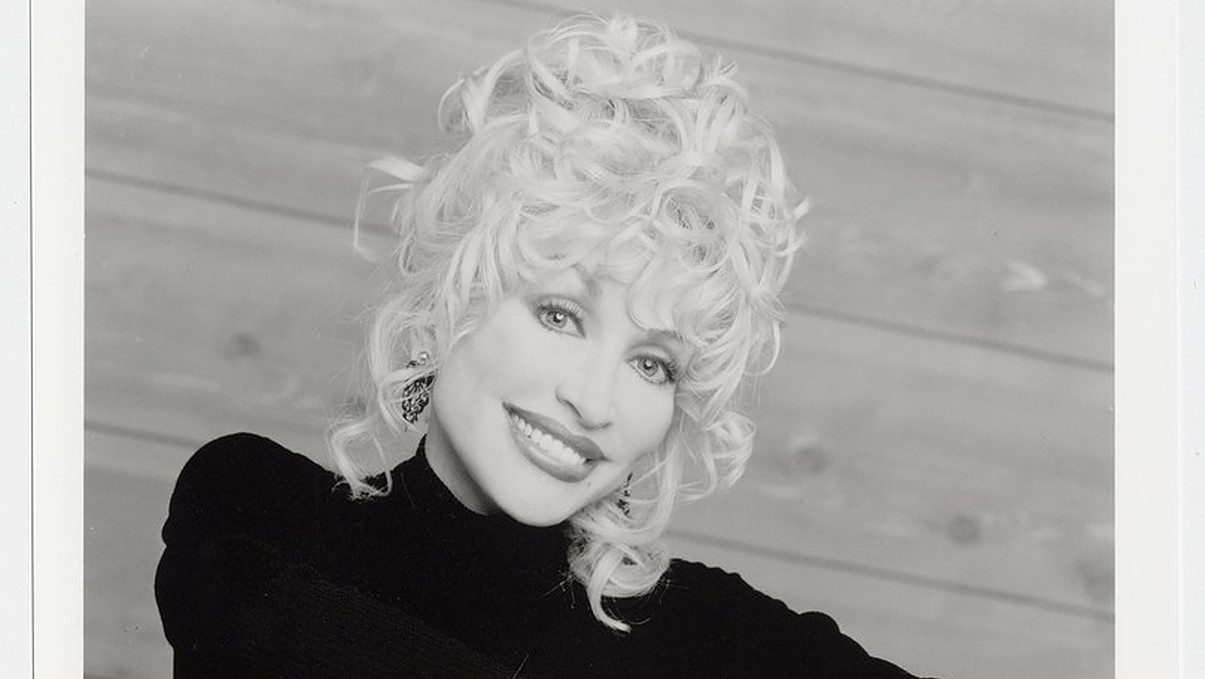 In 1996 at the University of Edinburgh, embryologist Ian Wilmut led a team of scientists to clone the first-ever mammal using an adult somatic cell from a sheep. They named her Dolly. Their success was a monumental step forward in the field of stem cell research and an unprecedented intervention by mankind in the reproductive processes of nature. When asked why he chose the name, Wilmut explained: ‘Dolly is derived from a mammary gland cell and we couldn’t think of a more impressive pair of glands than Dolly Parton’s’.

Country music legend, Golden Globe-nominated actress, philanthropist, humanitarian and theme park owner: Dolly Parton is one of the most successful people on the planet. She has also single-handedly both given and received more boob jokes than anyone else in history.

Dolly Parton invented the boob joke. If you’re brave enough to make one at her expense, she will make sure you know that you are only doing so because she allows it. Despite everyone’s best efforts, Dolly cannot be shushed, embarrassed or diminished by a joke about the size of her chest. For any single joke that is thrown at her, she has a hundred comebacks that are more entertaining, intelligent and funny; she has well and truly heard it all before. In an interview with The Telegraph, Dolly put it very simply: “When all else fails, I just tell a boob joke.” In this way, Dolly is able to imperceptibly reclaim the narrative surrounding women’s bodies, proving time and time again that she is so much more than a mammary gland.

Dolly began her career on the Porter Wagoner Show as his token ‘girl singer’; however, she was soon to grow so famous that she began to outshine Wagoner himself. The tension that ensued from the shifting power dynamic eventually resulted in Dolly quitting the show to pursue her own career and Wagoner suing her for millions of dollars in future earnings. The song she wrote about the split – “I Will Always Love You” – became the subject of controversy, as Dolly famously refused to fold to the pressure from Elvis’ management and instead offered the rights to the song to Whitney Houston, who went on to make her millions as the highest-grossing song by a female artist. Having left the Wagoner show, Dolly started up her own TV variety show, Dolly!, which provided her with more creative control and the spotlight that she was born to be in. She set about inviting other female artists to collaborate, including Emmylou Harris and Linda Ronstadt, forging what would become a genre-defining musical sound (see the 1986 album Trio) and lifelong friendship. Dolly was consistently underestimated and undervalued in her early career by men in the music industry at a time when men were the music industry. Dolly’s insistence on doing things her own way, with or without permission of men in positions of power, is fundamental to her success as well as to her message of female empowerment.

Dolly’s confrontations with men in positions of authority are reminiscent of the 1982 classic film 9 to 5, which she starred in alongside Jane Fonda and Lily Tomlin. The film exposes the daily harassment faced by women in the workplace as the three female protagonists attempt to overthrow their “sexist, egotistical, lying, hypocritical bigot” boss, Mr. Hart, with an assortment of elaborate and hilarious schemes. The film, like Dolly herself, was considered by scholars to be too cartoonish to contribute anything substantial to the feminist conversation. But this criticism surely misses the point: Dolly, like the film, is outlandish and ridiculous precisely because the situation in which she finds herself in is even more outlandish and ridiculous than she could ever hope to be. With a gross profit of over 100 million dollars, the film was a huge success. But the song “9 to 5,” written by Dolly for the movie, turned out to be even more iconic, more or less providing a soundtrack for the feminist movement at the time. To this day, “9 to 5” exists as a charitable organisation lobbying for equal pay and fair opportunities for women across America.

However, Dolly’s feminist message extends far beyond the hits; it goes all the way back to her roots as a small-town country singer in Tennessee. Spending her adolescence as one of 12 children living in a one-room cabin in the Smoky Mountains, Dolly used her lyrics to tell the stories of the women she grew up with. Helen Morales goes so far as to call her early albums ‘an insistent witnessing of women’s lives’ in the Dolly Parton’s America podcast series. Her early lyrics ranged from topics such as domestic violence and unintended pregnancy (“The Bridge”) to postnatal depression (“Down from Dover”) to the unwarranted imprisonment of women in mental asylums by their own husbands (“Daddy come and get me”). By giving a voice to the female victims of patriarchal oppression, Dolly was reacting against an entire tradition in country music, the “murder ballad”: songs sung by men describing acts of violence against women. To get some idea of the brutality of this tradition, the song “Knoxville Girl” is a haunting place to start. From a young age, Dolly used her music to challenge the misogynistic traditions in country music and show the world what it meant to be a woman living in poverty in East Tennessee.

Once Dolly found fame and fortune in the mainstream music world, she did not leave this message behind. Her continued dedication to female empowerment can be heard in later songs such as “You Don’t Know Love From Shinola”, “Touch Your Woman” and “The Salt in my Tears”. Her hit song, “Jolene”, is a fascinating (and catchy) reimagination of female relationships in music; whilst Dolly begins the song blaming the other woman for her husband’s infidelity, she quickly becomes enamoured by Jolene’s “flaming locks of auburn hair/ With ivory skin and eyes of emerald green.” The male character is cast into shadow by the vivacious and technicolour relationship between the two women. “Jolene” is a love song focused on the other woman and a complete overhaul of the androcentric tradition in commercially successful breakup songs.

Having spent the last thousand words painting a picture of Dolly Parton as a feminist icon of popular culture, to stop here would be to tiptoe around the one unavoidable truth about Dolly’s relationship with feminism: she refuses to call herself a feminist. When asked about feminism, several interviewers have reported seeing Dolly physically recoil or scrunch up her nose at the mention of the word. In an interview with Jad Abbumrad for Episode 1 of Dolly Parton’s America, she explains: “I don’t believe in crucifying a whole group just because a few people have made mistakes. To me, the word ‘feminist’ is like, ‘I hate all men.”’ In another interview with Meghan McCain for The View, Dolly sarcastically responds: “Does being feminine makes me a feminist? Does being common make me a communist?”

These responses could have been taken out of a textbook on feminist myths. If Dolly Parton, the Queen of all things bejewelled and low-cut, buys into them, what hope does the movement have in diffusing a clear message? What’s more, why does Dolly reject feminist terminology when she so clearly accepts, and even represents, its ideology?

The answers to these questions can be found by looking more closely at the era of feminism that Dolly grew up alongside. Take the movie Steel Magnolias, for example, another staple of feminist cinema in which Dolly starred. The film beautifully depicts female friendship: women working together, offering mutual support and unconditional affection. It is a representation of the ideal of sisterhood that was proposed by the second-wave feminists. But Dolly was never the kind of woman that second-wave feminism was talking about. Whilst her filmography is bursting with movies about women lifting up other women, this is as close as Dolly has ever come to experiencing kinship within the feminist movement. First, she was excluded for being too poor, and then, when she wasn’t poor anymore, for being too feminine. A line said by Dolly’s character in The Best Little Whorehouse in Texas sums it up well: “Don’t feel sorry for me. I started out poor, and I worked my way up to outcast.”

Second-wave feminism had a huge problem with class. The movement empowered middle-class educated white suburban women to take up office work and be paid fairly for it. This could not be further away from Dolly’s world as a child, in which ‘work’ meant manual labour in the fields as opposed to part-time secretarial jobs in the city. The women Dolly grew up with and sung about were not being represented by feminists at the time, and so had no reason to even consider labelling themselves as such. Theirs was an experiential as opposed to terminological feminism, a decision made every day to stand up against the proponents of patriarchy out of necessity as opposed to ideology. The legacy of this socio-economic alienation by second-wave feminism persists to this day, as many working-class women are uninterested in labelling themselves feminists since feminism has proven itself uninterested in them.

Talking about her childhood in her biography, Dolly explains that “womanhood was a difficult thing to get a grip on up in those hills unless you were a man”. Growing up in an environment catered specifically to the male, Dolly found herself craving femininity in any which way she could find it: scouring through magazines and newspaper clippings, searching for images of models, clothes, and makeup. Having been surrounded by masculinity throughout her early life, Dolly turned to femininity as a means through which she could define herself as an adult. But in doing so, she exposed herself to a new wave of disapproval from second-wave feminists: she was trashy, a blonde bimbo in a push-up bra, someone not to be taken seriously. At a time when Dolly was clinging to femininity in order to cope in a masculine world, the feminist movement was abandoning femininity entirely. The lyrics of her 1967 song “Dumb Blonde” point out Dolly’s frustration clearly: “Just because I’m blonde, don’t think I’m dumb/ ‘Cause this dumb blonde ain’t nobody’s fool.” Both men and women were guilty of underestimating Dolly because of her appearance, and it is because of this double condemnation that Dolly was left to fend for herself as an artist and as a woman.

Dolly was a third-wave feminist in a second-wave era, but the fact that she has yet to reconcile herself with feminism at the age of 74 suggests that perhaps third-wave feminism has not done enough to distance itself from the homogenising message of its predecessor. Rather than being vilified for rejecting the label “feminist”, Dolly’s rejection should be taken as a wakeup call that the movement must do more to champion intersectionality. Dolly is the un-feminist feminist icon that we desperately need because she reminds us what feminism should not look like and shows us what it should.