CherwellIndependent since 1920.
Sport The stars so far: the breakout players of the 2019/20 season in... 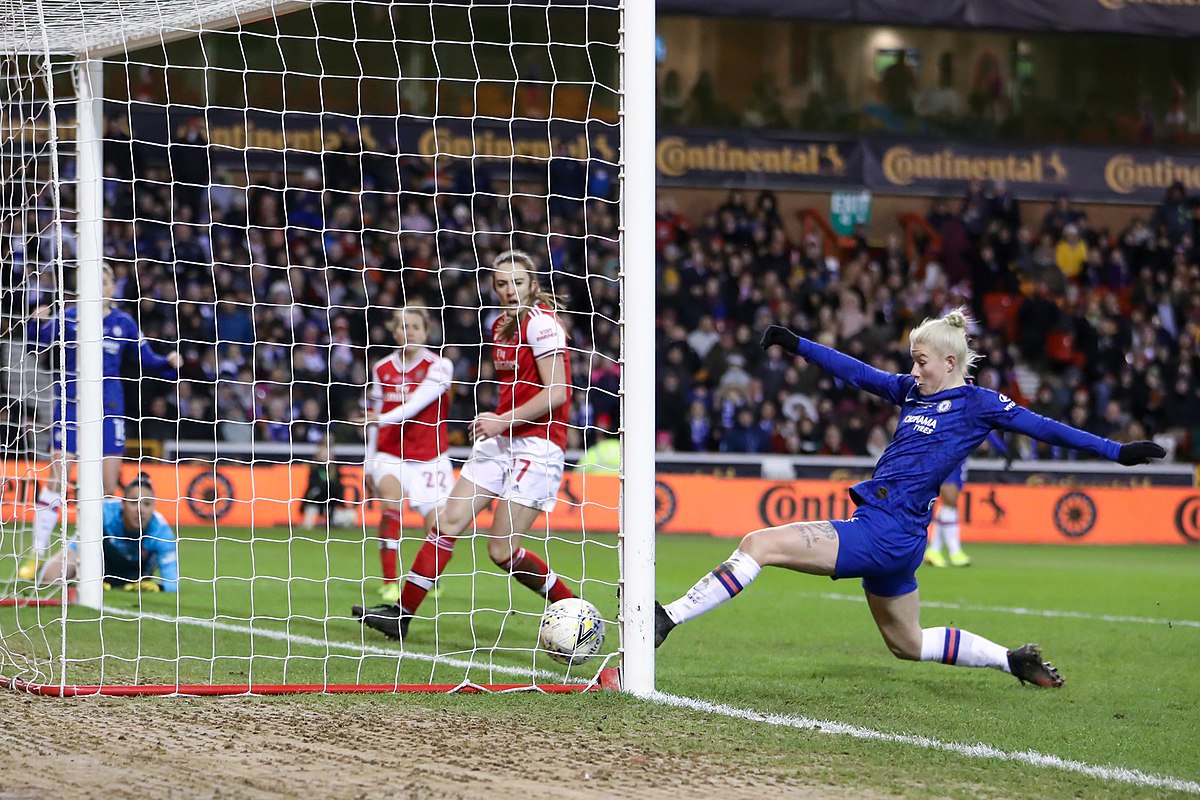 Riding the wave of the Women’s World Cup, the Women’s Super League has seen its most popular season yet. Crowds are up and with the FA Player app streaming the games to the public, as well as the BBC’s Women’s Football Show, coverage has been greater than ever before. As the season is halted by COVID-19, here’s some of the most notable players so far.

Bethany England (Chelsea): It would be wrong to not open with Chelsea’s #9, the league’s top scorer. A sure contender for goal of the year with her 40-yard screamer against league leaders Man City, England is central to Emma Hayes’ side. A prolific attacker, with 66% shooting accuracy, it is hard to understand why England was not picked for the Lionesses’ World Cup Squad in 2019. Now firmly established in Neville’s starting line-up, she’s proven her versatility, playing in midfield and even at wing-back. England is a delight to watch; treating both club and county to moments of excellence. There is no doubt that as Chelsea look to remain unbeaten, and snatch the title from Man City, England’s talent in finding the back of the net, whatever the occasion, is keeping the title race an exciting one.

Vivianne Miedima (Arsenal): Last season, Vivianne Miedima won the Women’s Super League with Arsenal, was a runner-up with the Netherlands’ national team in the World Cup, and was shortlisted for the Ballon d’Or Féminin. It is unsurprising that she has presented herself as quite the champion this season. As one of the most exciting talents in the game, Miedima leads on assists and has matched Bethany England’s scoring record. It would be hard to forget her astonishing performance against Bristol City; with 6 goals and 4 assists, she was the key player in the 11-1 victory (the largest margin in the history of the WSL.) If Arsenal are to keep the title for a second year in a row, then the pressure is on for Miedima to continue to make goalkeepers quake, and defenders tremble.

Ellie Roebuck (Man City): With her team top of the league, it is unsurprising that Roebuck, having conceded just 9 goals this season, is featured on the list. 10 clean sheets out of 16 is a huge show from the 20-year old, who is fast becoming a permanent fixture in the Lionesses squad. After filling the impressive gloves of the injured Karen Bardsley, Roebuck has continually proved herself to be City’s finest, with the best saving percentage in the league. This shot-stopper, along with the formidable City backline led by captain Steph Houghton, is surely enough to keep City in the top spot.

Lauren James (Man Utd): Having started the season aged just 17, Lauren James was the first goal scorer for Manchester United WFC in the WSL. Following this flying start, the now 18-year-old has gone from strength to strength. As top scorer for Casey Stoney’s team, with a particularly strong performance during the December meet with Everton, James has proven herself to be quite the sensation. The future of this incredibly technical young star is surely to be correlated to the successes of this up and coming Man United side. It looks certain that in the next few seasons Stoney’s side will become formidable competitors for the WSL title; no longer will it be a three-way battle, but with the inclusion of the Red Devils, it will be a four-way race.

Chloe Kelly (Everton): The Everton Striker has certainly produced some beautiful goals this season. Her two absolute screamers against Bristol City at the start of the season were indicative of what was to follow. She has led her team through what has been a challenging season for the Everton side. Her remarkable form was recognised by England Manager Phil Neville, who included Kelly in the SheBelieves Cup 2020 Squad. Ultimately, if the season does finish, Everton could perhaps pull back a top four finish, though a mid-table finish seems most probable. Whatever the outcome may be for the Toffees, there is no doubt Kelly will continue to shine in their starting eleven.

The Premier League season being interrupted right at the stage of the season affectionately known as ‘the business end’ makes it difficult for us to talk of the best players of the season with any real zeal. Moreover, Liverpool’s dominance since beating Norwich 4-1 on the ninth of August, all that time ago, would make such an endeavour quite dull and predictable, discussing the obvious qualities of Sadio Mané, Trent Alexander-Arnold, and Mo Salah. Instead, here’s five breakout stars from the season so far.

Adama Traoré (Wolves):  Simply one of the most entertaining players in the league the season and a constant reminder of one of the most pleasing aspects of football: dribbling. Traoré both consistently attempts far more dribbles per game than anyone else on the pitch, and tops the charts for the percentage of successful dribbles. For a long time, it seemed as though his unparalleled talent for dribbling was hampering his efficiency on the offensive end; however, this season we have seen him contribute 5 goals and 10 assists, terrorising Manchester City in the process. Watching his growth this season, it would be no surprise to see him become one of the game’s elite forwards in years to come.

Marcus Rashford (Man Utd): The Manchester United youngster is not a new name to anyone, but, as is often the case with young English players who burst onto the scene very early, too much is expected and the pressure mounts. Having quietly progressed over the last few seasons, Rashford has really come of age in this campaign, sailing past last year’s goal tally around Christmas time and eying up a twenty-goal season for the first time in his career. In an atmosphere which has not always been supportive in recent troubling years, particularly this year with fans complaining about the lack of a recognised striker after Lukaku’s departure, Rashford’s development is all the more admirable and exciting for the future.

Jack Grealish (Aston Villa): In the last few months, data analysts have been working on a new metric to determine the most efficient ball-carriers in the league. Few who have watched Villa regularly will be surprised that Jack Grealish and his bulging calves top the pile in ‘carries ending in a chance created’ ahead of the likes of Raheem Sterling, Kevin de Bruyne, and Trent Alexander-Arnold. What does this mean? Well, though Villa may be struggling, it is clear that Grealish is the heartbeat of their side, getting the ball as often as possible and either driving it forward with his own dribbling ability, or by finding an incisive pass. At a time when the English midfield is so devoid of these qualities, Grealish may be a godsend. The last 12 months have seen him grow as a player, and as a man. Having achieved his highest goal scoring return to date following Villa’s promotion, it may only be a matter of time before he moves on from his boyhood club.

John Fleck (Sheffield Utd): Sheffield United’s success this season has been largely built on the strong team ethos and tactical approach instilled by manager Chris Wilder. Although the team comes first, John Fleck may just be one of the most under-appreciated midfielders in the league. He may be seen as the Scottish Kevin de Bruyne for the way in which both these players consistently attempt very complex passes with a surprisingly high success rate. Operating mainly on the left-hand side in the Blades’ midfield three, he has caused a great deal of mayhem, often playing the ball around the corner of the defence from that position. A sign of him slotting perfectly into Wilder’s specific system this season is his record high tally of five goals, the highlight of these perhaps being a wonderfully drilled volley to level against Arsenal at The Emirates.

Çağlar Söyüncü (Leicester City): While the media have liked to present this image of Leicester City lining up Söyüncü as the perfect replacement for Harry Maguire a year in advance of his sale, football is rarely such a seamless business. In fact, this time last year, Söyüncü was a fairly expensive mistake – a defender who could barely speak English or get a look in for the starting XI. A managerial change and a much better command of the language may not have been the only factors, but now the Turkish giant with luscious locks cuts a particularly formidable figure. Leicester have the third best defence in the league this season, built on the solid partnership of Söyüncü and Jonny Evans, and many have commented on the solid business of banking a record fee for Maguire and still improving as a defence. This is not to denigrate Maguire’s undoubted ability, it is just to highlight that where Söyüncü perhaps offers a little less in build-up play, he delivers more on the defensive end, leaving few gaps, and maintaining the ultimate goal of keeping the opposition at bay rather than looking to take them on and spray wild diagonals. In the modern era of football, a defender fully committed to the unglamourous part of the game is quite a find.