A bridge too VAR: Is technology killing the game? 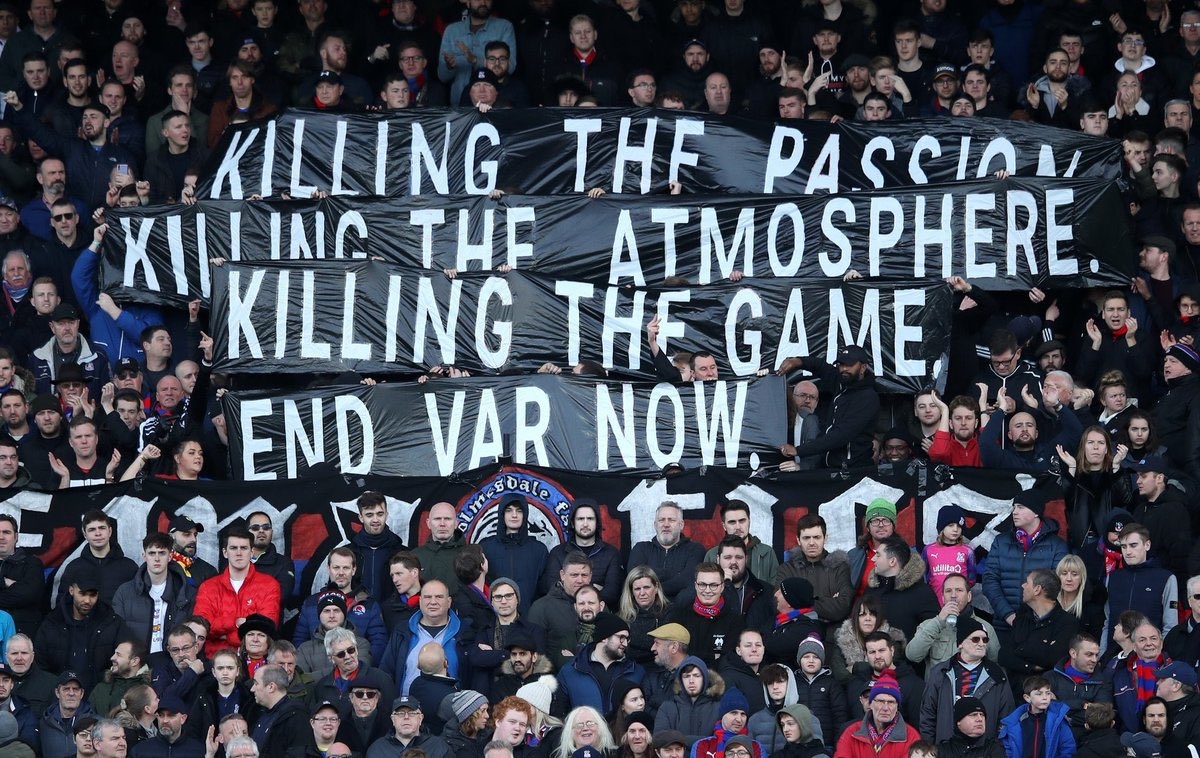 “KILLING THE PASSION. KILLING THE ATMOSPHERE. KILLING THE GAME. END VAR NOW” read the banner held up by the Crystal Palace Ultras in the first half of their game against Arsenal. Both sets of supporters joined together in the chant of “F*ck VAR”. The last section of the banner was held up again during the 65th minute as a lengthy review following a careless-looking tackle by Pierre-Emerik Aubameyang on Palace midfielder Max Meyer. Two minutes later, the Arsenal man was sent off by referee Paul Tierney under advisement from the Video Assistant Referee in Stockley Park. The banner was quietly lowered as replays played on the big screen inside Selhurst Park showed a horror tackle on Meyer’s ankle, studs up, a definite red. There was an audible gasp inside the stadium, and could be no doubt that the correct decision had been reached. As manager Roy Hodgson observed following the game, the only confusion with the process was why it took so long to reach the decision.

Leaflets distributed to supporters outside the Holmesdale Road stand before the game informed home supporters that this was the beginning of a campaign by Palace’s Ultras group, instructing supporters to chant “It’s not football anymore” when the banners were held up. However, there is no doubt that had those same supporters seen that tackle on Match of the Day in the evening, they would have been incensed if it had not resulted in a dismissal (referee Tierney initially only cautioned Aubameyang).

There can be few arguments against the way VAR was employed in this match. It added a two minute delay, and resulted undoubtedly in a correct decision. It is not, however, this element of the system which faces the most protests. That is reserved for offside decisions. Much is made of so-called armpit calls, players having goals chalked off for infringements that can barely be seen with the naked eye, although quite how an armpit can be the furthest forward part of an individual remains to be seen. Perhaps such supporter’s favourite part of the doughnut is the hole.

There is a lot of focus, too, on the apparent shortcomings of the technology itself. It doesn’t, we are told, film at a high enough rate of Frames per Second to be used so authoritatively; faster players can outrun the cameras. There is a margin of error of three feet! This is nonsense. Such calculations are based on the FPS at which Sky and BT transmit. In reality, officials at Stockley Park have access to a far better quality feed, transmitted live from the stadiums – their margin of error is thought to be less than 2cm with the ultra-motion camera provided by Hawk-Eye.

There are few rules that are objective in football. The offside rule is largely one of them. If a player is in front of the penultimate man of a team’s defence when a ball is played, they are offside. Of course, there is sometimes the debate as to whether a player has been “involved in active play”, although very few of this season’s VAR controversies have had anything to do with this.

Zak will no doubt argue that it kills the atmosphere inside the stadium, and this seems to be one of the most common arguments against the use of technology. Yet it simply adds another dimension to the excitement of the game. I was at Selhurst Park for the Liverpool home match, when a goal scored by James Tomkins was chalked off for a push in the box. Elation quickly turned to disappointment. Yet not only did replays demonstrate that the correct decision had been reached (it seems easier in these situations to blame the technology than the players who are actually demonstrably at fault), there is another side to this argument. I was also in the away end at the London Stadium when Jordan Ayew had a goal given two minutes after it was initially ruled out for offside. As the delay went on longer, excitement built up in the away end and, with this extra delay, the jubilation when the goal was given was greater than in pre-technology circumstances.

VAR is here to stay. The system may be tweaked, but it would be disastrous to remove it completely. Supporters, I must say, have short memories in refusing to recall the decisions missed in previous seasons which are now placed under a microscope, and must learn to work with the new system. It does change the matchday experience, and it does have its drawbacks, but its effect on the game is broadly positive and for this reason it must be embraced.

VAR – the latest footballing controversy. Regardless of which side of the debate you are on, it undeniable that VAR has been one of the big stories of this Premier League season, and it seems to be a discussion point after most games on Match of the Day. For me, VAR is sucking the life out of football. I will show why football doesn’t need, and doesn’t want, VAR.

Firstly, most of football is surviving perfectly fine without VAR. I support Portsmouth, who currently play in League One – VAR could not be further from our game; we don’t even have goal-line technology! Sure, the standard of refereeing is often questionable, and a quick YouTube search would likely unearth many howlers from the past few seasons; but football survives. It’s not as if attendances are dropping off due to poor refereeing!

I have suffered from poor refereeing decisions following Pompey, on numerous occasions. Two games spring to mind. Firstly, away at Luton Town, on a snowy Tuesday night in January 2019, driving through the backroads on the way due to a crash on the M25, Pompey lost 3-2 courtesy of the suspect awarding of a penalty kick and free kick respectively to Luton – both resulted in goals. Less than two weeks later I took the long journey down to Plymouth Argyle, where Pompey drew 1-1, this time courtesy of another direct free-kick for the opposition, which replays showed shouldn’t have been awarded. However, I wouldn’t have it any other way. I’d rather travel the 6+ hours back from Plymouth feeling that sense of injustice, than sit in a ground and look at a screen, or wait for a referee to do so. In fact, the game away at Luton marked the game where Luton overtook Pompey into top spot, and our season seemed to fall away. Yet still, I’d rather that than the game tried to be made exact. Imperfection is part of football, as I return to later.

The chief reason for my opposition to VAR is that football is a game of emotions, and nothing compares to the ecstasy of scoring a goal. If a goal is contentious in League One, I can take a quick glance at the referee and his relevant assistant, and continue with my celebrations. Last season, Pompey were locked in a battle for automatic promotion, and had to beat Peterborough United at home to maintain any hope. Pompey got the game back to 2-2 from 2-0 down, and then quickly found 2 players through on goal against just the Peterborough ‘keeper – the ball is played square, goal scored, celebrations start… but offside. The decision was instant – one look at the assistant’s flag, and the ecstatic celebrations were cut short (to make it worse, Peterborough scored within minutes and we lost 3-2). The decision was also correct – we didn’t have to wait 5 minutes for dots and lines to be applied, and the game probably wouldn’t have taken the negative turn for us that it did if we did have to wait. But that’s what football is all about – quick play, gaining momentum, scoring whilst you’re on top. Not stopping every few minutes for somebody to re-watch the game on a screen.

As I write this, David Luiz has just been sent off for Arsenal against Chelsea for denying Tammy Abraham an obvious goal-scoring opportunity, and a penalty was given. Clear foul, obvious red card. Yet the Chelsea fans have to hold their celebrations until the VAR check is complete – how deflating. If a player is sent off at Fratton Park, the mocking chants and sarcastic waving commence immediately.

I concede that there have been some occasions when I have enjoyed the use of VAR; but all have been from my sofa at home, watching as a (fairly) neutral spectator. The Manchester United penalty against PSG, which Rashford smashed home, and the Sterling disallowed goal against Spurs, both in the Champions League last season, were two occasions when the drama was brilliant. But football is about so much more than sitting on your sofa at home, watching as a neutral. It’s about standing on the terraces with your mates and family, having a pie before the game, travelling the country (and continent, if you’re fortunate enough) with your team, and then debating the game afterwards.

Joe will undoubtedly produce many technical arguments as to how VAR reduces errors, the type of arguments which admittedly my side lacks. But I ask: why do people play and watch football? It is not for perfection and 100% accuracy – it is for the emotion. This includes the instantaneous joy, disbelief, heartbreak and countless other feelings that football can bring – let’s not let VAR deprive the best sport in the world of this.