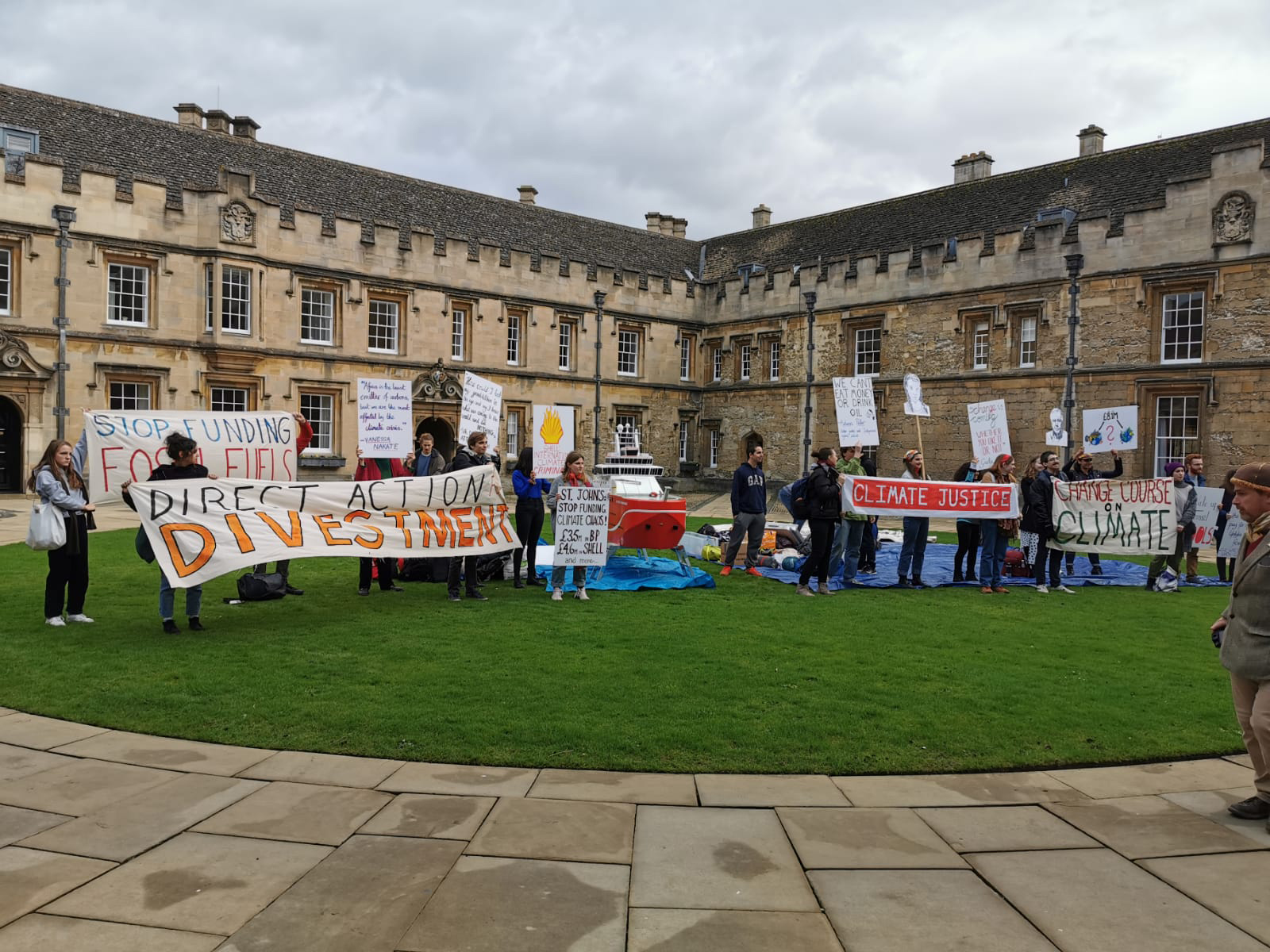 Climate protesters, camped out on St John’s front quad, have announced the end of their protest.

Direct Action for Divestment (DAD), a large group of students from across Oxford University, set up camp last Wednesday in protest of St John’s College’s investments in fossil fuel companies.

St John’s currently invests £8.1 million in Shell and BP, two of the corporations most guilty for worldwide ecological destruction.

After five days of action, DAD announced they would be leaving St John’s via Facebook. Their exit statement read: “Vulnerable communities across the Global South have long been suffering the effects of climate change. We cannot accept a system in which those with wealth and privilege – like St. John’s College – continue to profit off this. As a result, we will continue to hold the College, and the University as a whole, to account.

“During our occupation, the College disabled the keys of St. John’s students seen to be assisting the protest. They have prevented us from bringing food, hot water, and blankets in from outside, and even responded to our demands with trivialising suggestions that the College switch off the central heating.

“In contrast to the antagonism from College administration, Oxford has united in a show of heartening support and solidarity. Students inside the College have brought food and hot tea; tutors have made our case to senior College officials; alumni have spoken out in support of our cause. We would like to express our deepest gratitude, and crucially to thank college staff for their understanding. This gives us confidence that the discussions around divestment will continue after we leave, on every level of college life.

“We are also delighted to have received many expressions of interest from students at other colleges, who want to see similar escalations elsewhere. Anyone interested in lobbying the University and colleges on their investment practices should contact Oxford Climate Justice Campaign, who has been working for many years to encourage intersectional system change in Oxford.

“Yesterday, our representatives met with President Maggie Snowling to discuss our demands. The President acknowledged that our occupation had brought divestment to the top of the agenda, and we are pleased to say that she has promised to make some small steps in the right direction. She agreed to increase student representation in their Ethical Investments Working Group, and will no longer invite BP and Shell employees to advise on College investment practices. Finally, she said that the working group plans to put forth a recommendation to the Governing Body by the end of the year – two years after St. John’s students first raised divestment. The College has already failed in its duties to its members. If the recommendation is not a strong commitment to divest, the College will have failed in its duties to the world.

“In our five day occupation, we brought divestment to the forefront of people’s minds. We have reignited a conversation not only within St. John’s, but across the University. We will continue to hold the College accountable throughout the divestment process. We are glad that the College has recognised the importance of this issue. We hope that the College will continue to make this a priority. If they do not, we will be back.”