Senior figures in Oxford admissions have criticised the University’s attempts to broaden access, alleging their efforts represent discrimination against candidates from more affluent backgrounds by making them less likely to receive an offer.

Criticism has centred on the University’s aim to increase their intake of disadvantaged students from the current 15% to 25% by 2023, as well as tutors being asked to interview more state school applicants.

A source high up in University admissions told The Sunday Telegraph: “The instructions we received were that we had to interview them as long as they met very basic standards – and some even failed those.

“My experience is that those candidates just don’t do very well. We call them to interview because we have to.

“They just do really badly and we reject them and it’s a waste of everyone’s time. But if this target of 25% is going to be met, we will have to start admitting some of these people.”

The source suggested that admitting students from disadvantaged backgrounds would mean students from upper- and middleclass background will be “unjustly discriminated against on the basis of their social class.

“This almost certainly will mean they will be let in at the expense of middle class students, who will have to make way for candidates who are not as academically talented as they are.”

The source said most colleagues “see no problem” with the University’s access drive, stating “almost everyone is willing to go along with it quite enthusiastically.”

Increasing criticism of the University’s admissions policy comes after last week’s announcement that Oxford made more than 69% of its undergraduate offers this year to students attending state schools, an increase of 4.6% on the previous year and a record high.

A spokesman for Oxford University rejected the criticism, saying: “Our admissions process is designed to identify academic potential and passion for a subject.

A highly academically talented student with enthusiasm for their chosen subject has every chance of getting into oxford, regardless of background, and will continue to do so.”

As part of future access initiatives, the University will start a new scheme in 2023 which will enable 250 state school students (including refugees and young carers) to receive free tuition and accommodation at Oxford during the summer.

Of these, 50 students will be eligible receive offers “made on the basis of lower contextual A-level grades, rather than the university’s standard offers.”

A second source in University admissions further emphasised that giving more offers to pupils from disadvantaged backgrounds would result in more middle-class candidates failing to gain a place, as the most affluent would still receive the same approximate number of places, an argument that the University rejects.

The source said: “The Vice Chancellor is on the hook now, she is really out on one with this pledge. It is pretty stark.

The dial has got to move quite a long way. We are not like Bristol and Exeter who can hit their numbers [of disadvantaged students] simply by expanding by about 500 places a year and worrying about beds later. “That’s not going to happen at Oxbridge, our system doesn’t work like that with the constraints on college size. It’s got to be done at the expense of the middle class kids.”

Independent school heads, allegedly, “can see the writing on the wall” are becoming increasingly worried over the University’s direction on access and admissions. “My biggest fear is we will end up polarised. We will still take them in heaps from the Etons and Westminsters. And what gets squeezed out in the middle, the heads who used to send us two or three a year get squeezed out.”

The University has remained steadfast against criticism, maintaining its push to broaden access for the foreseeable future. Strategies such as UNIQ, a programme targeted at lower income groups, will continue to expand, after 250 participants were offered places at Oxford this year.

For those who took part in last year’s programme, the offer rate stood at 33.6%, compared to 21.5% for applicants who had not participated. The University expanded participation in UNIQ by 50% last year, taking in 1,350 pupils.

Dr Samina Khan, Director of Undegraduate Admissions and Outreach at Oxford, said, following the University’s announcement on offers last week: “We know that students from some backgrounds are not as wellrepresented at Oxford as they should be, and we are determined that this should change.

“Having taught in state schools during my career, I know the wealth of talent that lies there. We wish the students every success in their studies, and hope they flourish at Oxford.” 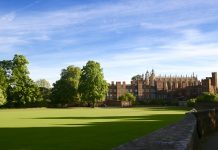