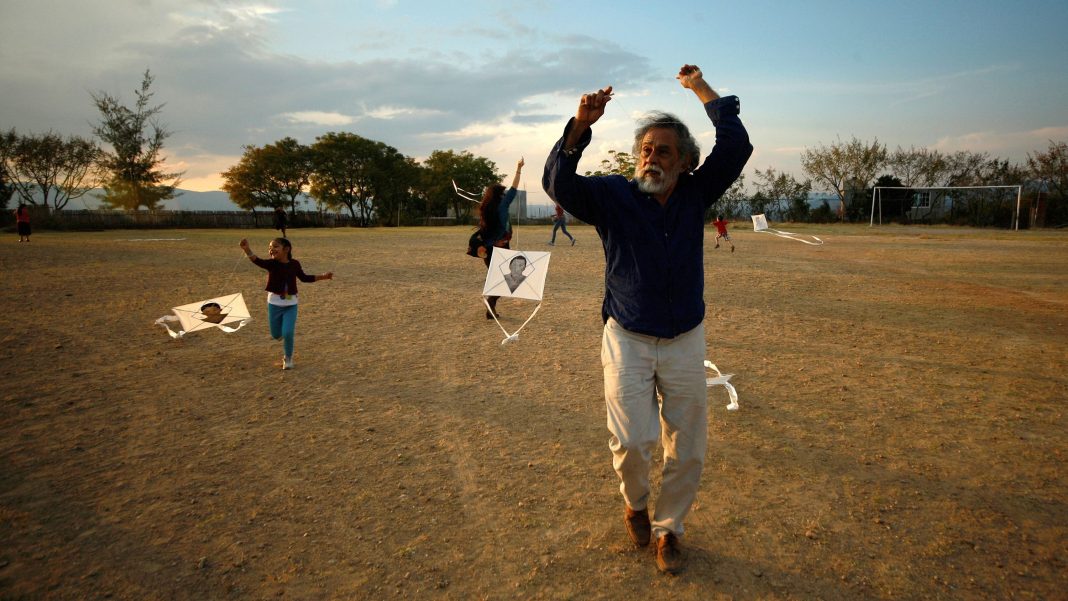 I had been living in Oaxaca for two months when Francisco Toledo died on the 5th of September 2019.  Toledo was the ‘grandfather’ of Oaxaca’s artistic community and one of Mexico’s most well-known contemporary artists. I spent the two months prior to his death visiting museums, art galleries and other cultural institutions that were funded or created by the 79-year-old Oaxacan artist – a fact that, I was often unaware of. These places do not bear his name, and it is easy to visit Oaxaca and leave largely ignorant of the crucial role he played in this community. Toledo was a reserved man who shied away from the fame and celebrity he attracted throughout his career, avoiding interviews and photographs whenever he could. Yet as an artist, an activist and a philanthropist, he helped shape Oaxaca into the creative and rebellious city that it is today; one fiercely protective of its heritage and cultural identity.

Although records of Toledo’s childhood are vague, he reportedly spent a large part of it in Juachitán, after being born in Mexico City in 1940. He was of Zapotec heritage, one of Oaxaca’s indigenous groups. At age seventeen he studied graphic art in Mexico City at the Instituto Nacional de Bellas Artes. It was in the capital that he learnt a variety of artistic techniques-painting, sculpting, drawing, lithography that he would continue to use throughout his life. He gained recognition during his studies and held his first solo art shows when he was only nineteen. With the money he made he was able to move to Paris to continue his artistic education. Rufino Tamayo, a fellow artist of Zapotec heritage, took the young Toledo under his wing and helped him establish a reputation. Yet, nostalgic for his hometown and culture, he moved back to Mexico, eventually settling in Oaxaca city in the 1960s.

Toledo’s broad technical education manifests in his multidisciplinary works. Ranging from black and white lithographs, to vibrant paintings, and brazen sculptures, to painted kites; his work never tried to fit an aesthetic mould. Yet it is a love for Mexico, more specifically Oaxaca, that defines his art. While his time in Europe introduced him to expressionism and surrealism, with critics often highlighting influences of Klee in his work, he remained firmly loyal to his Zapotec heritage. He incorporated the myths and legends of the pre-Hispanic Oaxacan culture into his art, depicting images and scenes of deities and sacred animals that are almost hallucinogenic in expression.

However, Toledo’s pride for Mexico did not merely manifest in his art’s folkloric currents, but so too in its civic preoccupation. He used his art to draw attention to the inequality, corruption and brutality that too often defines Mexico. In September 2014, a group of students from a teaching college in Ayotzinapa were on their way to the town of Iguala to protest against the discrimination towards rural teachers. While returning from Iguala, they were stopped by police who opened fire on their bus. Three were killed, one was found mutilated the next day, and the other forty-three were abducted by police. An official yet highly disputed government report stated they were handed over to the local drugs gang “Guerreros Unidos” by corrupt police officers, who killed them and burned their bodies. What really happened remains unknown. Outraged by the police brutality and government corruption, Toledo took a stand by painting individual portraits of the forty-three missing students onto forty-three kites. Ayotiznapa Kites brought national and international focus to their abduction, becoming a symbol of outrage.

Toledo saw the civic role that he as an artist can and had to play. As a caretaker from Toledo’s Instituto de Artes Gráficos (IAGO) told me when I visited, it was the artist’s social commitment that ultimately came to define him. He invested his wealth into Oaxaca, helping bring the community together. He funded ‘El Centro de las Artes’ in San Agustin, converting the ex-textile factory into the first ecological centre of arts in Latin America. It continues to offer traditional artisanal techniques classes, as well as exhibition spaces, and residential stays for up and coming and established artists. The IAGO offers workshops for school children and artists alike, as does his Centro Fotográfico Álvarez Bravo. Toledo also donated grants and scholarships to people of all ages, from schoolchildren up to post-graduates. Oaxaca is the second most vulnerable state in Mexico: outside of the tourist areas, an estimated 272, 000 families are living in extreme poverty. Toledo used his wealth and fame to help make art accessible to all, to support those from poor communities, and to help bring people together through creative expression.

His commitment to Oaxaca led to his mission to empower marginalised communities. He heavily campaigned to preserve the Zapotec language. In common with the other sixty-seven recognised indigenous languages found across Mexico, Zapotec is disappearing at an alarming rate. Many in contemporary Mexican society perceive indigenous languages as impracticable, favouring Spanish and English as the languages of business. Toledo, who could speak Zapotec, recognised that losing the language meant losing an integral part of Oaxaca’s identity, and so he set out to help save it. The publishing house “Editorial Calamus”, that he funded produces books in Zapotec to help people to learn the language, as well as to create written records of it. His Centro de las Artes de San Agustin set up an award for literary creations in Zapotec in 2017.

Toledo also recognised how the drive for profit and the draining influence of globalisation can ruin a city and its culture. When McDonald’s was on the verge of opening in the Zócalo, the city’s bustling main square where people meet up and artisans sell their crafts, Toledo organised a demonstration. He and other artists handed out tamales, a staple of Mexican cuisine, to protest the looming hordes of hamburgers. Toledo even threated to stand naked outside the proposed site for the fast-food chain until it conceded. His protest was a success and the historic centre remains free of any ‘golden arches’, encapsulating how Toledo not only brought the community together, but so too embodied the activist spirit of Oaxaca, inspiring people to be proud and protective of their city.

Upon arriving in Oaxaca, you’re immediately struck by its rebellious and artistic character: the multi-coloured walls boast bold and political street art, small lithograph workshops pepper the streets and after school young children hawk their drawings on the main street. While it may have always been a city of activism, infused with a creative energy, Toledo bolstered its spirit throughout his life. He brought Oaxaca together with his art and protected the city with it too. When I revisited the museums, libraries and galleries he helped set up, I saw black bowties adorning the doorways. These tributes were not only there to celebrate Toledo, the man and citizen, but to acknowledge what he helped create in this city. He reflected the importance of the artist as not only an individual creator, but as a political force: one part of a wider community. The people of Oaxaca will mourn the death of “el Maestro” for years to come.