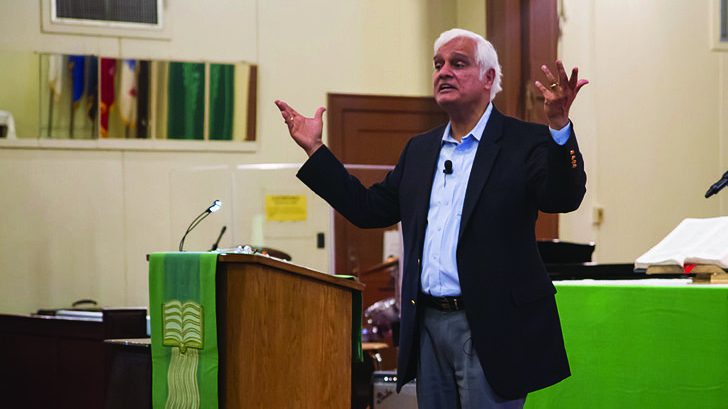 Oxford colleges have been annually hosting the summer camp of the evangelical Christian group the Ravi Zacharias Trust, despite the Oxford SU having previously called for the University to “distance itself publicly” due to concerns over the group’s “homophobic, misogynistic and Islamophobic views”.

The week-long residential camp was held at Merton College this July with speakers including Prof. John Lennox, Oxford Emeritus Professor of Maths. It was convened by Sam Alberry, who promotes the principle of “agape love” or celibacy for homosexual Christians.

The Ravi Zacharias Trust is the European branch of the US-based Ravi Zacharias International Ministries (RZIM), founded and led by the evangelical Christian apologist Ravi Zacharias. RZIM shares an academic director, Dr Joseph Boot, with the Wilberforce Academy. The Academy was banned from colleges including Trinity, Jesus and Lady Margaret Hall due to the views of their founders, Christian Concern.

Oxford SU told Cherwell: “The University of Oxford should be a safe and welcoming space for all people, hosting events that jeopardise this are counterintuitive. We need to take action on the intolerance and hatred in its most extreme forms, but uprooting it wherever it exists and stop events like this happening on campus. We are calling for Colleges and the University to be more responsible when taking commercial bookings and setting a precedent that makes campus inclusive.”

The SU first became aware of the group’s presence in 2015, after the University expressed concern over the Trust’s close association with Wycliffe Hall in their PPH report.

The college and the ministry jointly established the Oxford Centre for Christian Apologetics in 2006, with Ravi Zacharias himself listed as one of the teaching fellows. The University expressed concern about the Centre because its “admissions to the centre were not clearly differentiated to the university,” raising questions about the rigour of the Hall’s assessment process.

Today, the Centre is wholly run by RZIM, although the Centre’s “Team” include Max Baker-Hytch, a professor at Wycliffe Hall and those participating in the Centre’s programmes have the opportunity to be accommodated in single rooms at the college. Despite the SU’s calls for the University to find “clear ways” to show that “the wider University is not in sympathy” with such views, Queen’s College hosted the Trust’s camp in the summer of 2015.

Speaking to Cherwell, a spokesperson for the Trust said: “Zacharias Trust did not respond to the call by the Student Union four years ago, as the proceedings were only known to students — thus, we were not invited to respond. Our organisation believes in the sanctity and value of all human life regardless of ethnicity, sexual orientation or gender. The women we employ occupy some of the highest positions of leadership within our organization, and we also employ individuals with same-sex attractions.

“As a Christian organisation, some people will naturally disagree with our viewpoint. When disagreements in faith or philosophy arise, no matter the audience, we urge civil dialogue. Any claim otherwise is false and unsubstantiated.

“Lastly, we are grateful for our relationships with some of the colleges and we have never had any issues using their facilities.”

Merton College JCR President told Cherwell: “Merton JCR is proud to hold the values of inclusion and equality at its core, and that is something we strive to promote amongst students through cooperation with college.”

RZIM’s purpose “is to reach and challenge those who shape the ideas of a culture with the credibility of the Gospel of Jesus Christ” which they facilitate through their “global team of speakers” based at their interna- tional offices. According to the Ministries’ website, their staff members work in 43 different countries, and their videos and blogs attract 60,000 users per month.

Ravi Zacharias, a self-claimed former sceptic, first launched RZIM in 1984, after securing financial backing from American evangelist Billy Graham. He first forged links with the preacher after being invited to speak at the plenary of his Amsterdam conference in 1983. Zacharias featured in one of Billy Graham’s video sermons as late as 2012.

The Association also works in the UK and was the subject of controversy in 2017. Critics of the group, including other Christian Anglicans, called for Graham’s son Franklin, CEO of the Association, to be banned from the UK after alleging his comments about LGBTQ rights and Islam were a violation of laws on hate speech.

In 2017, Ravi Zacharias was forced to issue a statement regarding a misrepresentation of his association with Oxford and Cambridge universities.

According to Christianity Today, his 2015 biography, now corrected, on the RZIM website read that he held “six doctorate degrees” when he had only been awarded honorary degrees.

In a statement, RZIM stated that referring Mr Zacharias as “Dr.” was “appropriate and acceptable practice with honorary doctorates” although they admitted the practice was “contentious.”

He also claimed to be a Senior Research Fellow at Wycliffe Hall, a line which has been subsequently removed.

They said: “Ravi’s desire and our desire as an evangelistic ministry is to engage the honest skeptic, to take questions seriously, and to be as clear as possible in our communication. We therefore have restructured Ravi’s biography to better reflect his 45 years as an itinerant evangelist and apologist.”

Zacharias’ Spotify artist account still refers to him as “Dr”.

Sam Allberry was the founding editor of Living Out, a magazine that claims “to help Christian brothers and sisters who experience same-sex attraction stay faithful to Biblical teaching.”

Writing in 2016 for the Gospel Coalition, Allberry said: “Sexual unfulfillment itself becomes a means of deepening our sense of the fuller, deeper satisfaction we await in Jesus. It helps us to hunger more for him. We skip the appetizer, but we await the entrée. Celibacy isn’t a waste of our sexuality; it’s a wonderful way offulfilling it.

Living Out and the Oxford Centre for Christian Apologetics itself are both considered organisations that hold “similar values” to the True Freedom Trust, and feature on the latter’s website. In April 2019, a conference held by the Freedom Trust was protested after describing the event as promoting “a form of gay conversion therapy.”

Allberry was one of the signatories, which also included Head of Welfare at St Edmund’s Hall Will Donaldson and former Pembroke Chaplain Greg Downes, by “concerned Anglicans” of the Oxford Diocese earlier this year that called for the bishops to define the “appropriate setting for sexual intimacy – namely in marriage between a man and a woman”.

Allberry was also among the signatories of the 2017 evangelical manifesto, the Nashville Statement, which The Guardian described as “a proclamation denouncing LGBT rights and anyone who supports them.”

The Statement was designed as a response to the “post Christian” age, where “common to think that human identity as male and female is not part of God’s beautiful plan, but is, rather, an expression of an individual’s autonomous preferences.”

The Statement’s list of affirmations and denials includes a denial that “adopting a homosexual or transgender self-conception is consistent with God’s holy purposes in creation and redemption.”

Eliel Cruz, founder of the Faithfully LGBT Project, attacked the Statement in the New York Times, writing that the Statement “represents a renewed commitment to open bigotry.”

Allberry tweeted at the time: “The Nashville Statement brings much needed clarity to issues where there is often silence, pain and confusion.”

The opening address of this year’s summer camp was given by Os Guinness, author and co-founder of the Trinity Forum, a group that aims to “cultivate, curate, and disseminate the best of Christian thought” by “seek(ing) to connect thinking leaders with leading thinkers” in global policymaking.

Guinness’ co-founder is Alonzo MacDonald who established the McDonald-Agape Foundation, which describes itself as “a support group for scholars and other dedicated leaders to serve Jesus Christ.”

The Foundation lists Prof. John Biggar as its collaborative scholar in Oxford, and funded Biggar’s “Ethics and Empire” project in 2017. The project attracted criticism from Common Ground and Dan Iley-Williamson, lecturer at Queen’s College and Labour Councillor, who described Biggar at the time as an “ardent apologist for colonialism.”

Guinness was also a guest speaker at US evangelical pastor Rick Warren’s Saddleback Church in the April 2015. In 2008, Obama caused outrage after he selected the pastor for his inauguration due to Warren’s opposition to abortion and same-sex marriage.